Backpacking and Fishing Three Rivers in the Sandwich Range 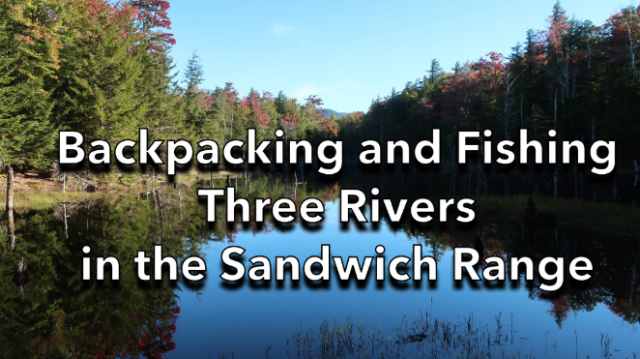 The Sandwich Range encompasses the southwestern portion of the White Mountain National Forest including everything, roughly speaking, from the Kancamagus Highway south to Squam Lake. While it includes several 4000 footers and the region is heavily forested, the terrain is quite varied with many smaller hills, numerous ponds, rivers, and streams. It’s also the perfect place to go backpacking in autumn and enjoy the fall colors without running into many people.

This past week, a bunch of my friends and I got together for a mellow trip exploring the Guinea Pond Trail and adjacent areas, from beginning to end, with a little fly fishing thrown in. We try to get together every October for a day hike, a bushwhack, or a backpacking trip to hang out and enjoy the leaves.

While I’ve spent a fair amount of time backpacking in the area, it’d been two years, almost to the day, since I’d done an overnight there. So when my friend Beth proposed this trip, I was eager to come along, provided that I could spend a few hours Tenkara fly fishing on some of the large streams we’d encounter, including:

Pond Brook is a lovely freestone stream that runs alongside the Bennett Trail. I caught my first Tenkara fish in it nearly a decade ago as a beginner, when I had no idea what I was doing. I hadn’t been back since with a rod in hand, so I was eager to fish it again. And it didn’t disappoint, despite somewhat challenging conditions.

A week earlier, the southern Whites had received 3″ of rain, and so there was a lot of water in the brook. Trout hunker down in their hidey holes when the current is too strong, but I was still able to find them by fishing the part of the river that had a slower flow or flowed upstream.

While it’s counter-intuitive, different portions of a river flow at different speeds, particularly those that have rocks in them both below the surface or above it. These create eddies, holes, waves, where trout can hang out to rest and save energy while they wait for a meal to pass close by. One of the most important skills of stream fishing is understanding how these obstacles affect the flow and placing your fly where the trout are most likely to be. There’s a fly fishing classic written by Dave Hughes, titled Reading Trout Water that illustrates (with drawings) how to interpret the effects of river geology on trout behavior. Buy it. It will vastly improve your ability to catch trout.

I spent four hours fishing the stream but only covered a half-mile, walking up the stream and along the riverbank, in freezing cold water wearing waterproof socks and mesh shoes. I was cold, but this being a backpacking trip, I wasn’t particularly interested in carrying a pair of waders and fishing boots in my pack the rest of the weekend. The fishing was good nevertheless and the autumn foliage, though early, was pretty. I’m so thankful that I live in the White Mountain. I caught 7 trout on Pond Brook and 3 that wiggled off my barbless hooks.

I met up with my friends in the early afternoon and we hiked down the Guinea Pond Trail for a few miles before pitching camp at a dispersed site in the woods. I’d warned everyone before the trip to wear blaze orange because hunting season had started. Many years ago, I’d been camping off the Guinea Pond Trail, sleeping in a hammock, when a hunter had dragged a deer carcass right past where I lay without seeing me. Scared the crap out of both of us, but we had a good laugh.

While my friends were setting up their shelters, I wandered down to the nearby Cold River for a spot of fishing before dinner and caught a very large brook trout, close to 10″ in length. He’d been hiding in a fissure at the base of a big cascade/falls and put a huge bend in my rod. I don’t normally fish falls because the water is too powerful and the fish can’t fight the current, but this guy had evidently found an ideal spot to hang out and pick off bugs and scuds as they floated by. I removed the hook and dropped him back in the river.

My friends were assembling for dinner, so I put my rod away and joined them, making a mental note to come and explore the Cold River more in the future. There’s an off-trail section that runs from the Guinea Pond Trail down to the small hamlet of Whiteface that I want to explore someday. I once caught a brown trout in the Cold River at the Whiteface town beach before they restricted parking there to locals only. That was 6 years ago but is indicative of the delights that river must hold for people who are willing to make the effort to explore it. Note: This Cold River has its headwaters in the White Mountain National Forest and is different from the other Cold River, further south and along the Vermont border.

The next morning we set off to finish the Guinea Pond Trail and a walk along the Beebee River beyond it. The Guinea Pond Trail is notoriously wet because it’s been annexed by beavers that have damned water over much of it. At 2.6 miles up Sandwich Notch Rd, a large beaver pond covers the trail. There’s a rough bypass trail along the north side, but much of the bypass route was also underwater when we sloshed through.

When we rejoined the trail, which follows the old Beebee River Railroad right-of-way, the trees on both sides of the trail were also flooded, I suspect, from more beaver encroachment. It really looked like the Florida everglades!

Being inquisitive types, we followed some of the logging roads branching off the Guinea Pond Trail to do a little exploring. If you look at a map of this area, there are a number of small ponds, prime moose habitat I suspect, that are easily reached with some mild bushwhacking. They’re all unnamed, but make a great destination if you want to do some wildlife viewing or find a very isolated spot for dispersed camping.

Back on the Guinea Pond Trail, we followed a new bypass, around another flooded section of the trail (the one with the snowmobile bridge). There was a new sign marking it that I did not remember from previous visits. However, after the bypass, we rejoined the trail and came across another flooded section, where the beavers had built a dam across the trail itself. We all got wet on that one, except for Wanda who changed into Gore-tex socks before wading through. My shoes and feet were already wet, so it wasn’t a big deal to me.

Once we finished the trail, my friends broke off to go find an old graveyard off Sandwich Notch Road, while I fished the BeeBee River. I quickly caught a trout, close to where I’d caught my first trout of the season all the way back in April on this same river.

My friends were not long, so we regrouped and explored the Forest Service road running along the Beebee, which provides excellent access to the river, something I hadn’t known previously. There’s also a gaited conservation area at the end, which provides many more miles of access, although all on foot.

The end of the fishing season on October 15 is looming and I hope I get a chance to return to this area before it ends with waders, long underwear, and fishing boots. Standing in all that cold water during our trip wasn’t that comfortable. Still, these off-the-beaten-track areas of Sandwich Range are always so delightful to visit. I really must make more time to hang out here next year.

Editor's note: If you’re thinking about buying gear that we’ve reviewed or recommend on SectionHiker, you can help support us in the process. Just click on any of the seller links above, and if you make a purchase, we may (but not always) receive a small percentage of the transaction. The cost of the product is the same to you but this helps us continue to test and write unsponsored and independent gear reviews, beginner FAQs, and free hiking guides. Thanks and we appreciate your support!
Previous NEMO Moonlite Reclining Trail Chair Review
Next KEEN Targhee High Lace Winter Hiking Boots Review