Best DEET, Picaridin, and Natural Insect Repellents: How to Choose 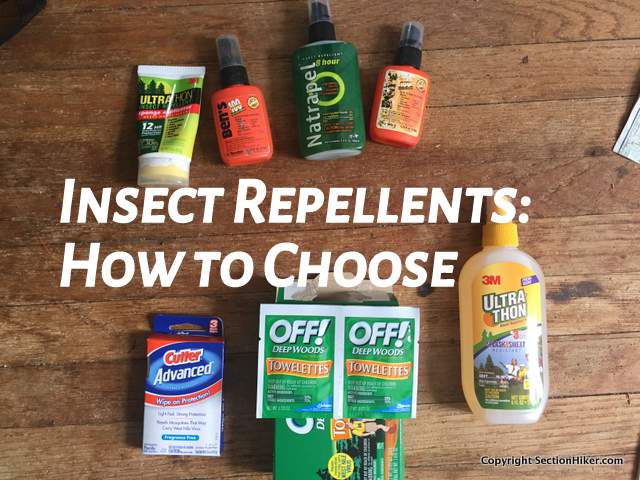 DEET and Picaridin-based insect repellent sprays and lotions (bug dope) are available from a wide range of brands and in a variety of forms factors. How effective are they are repelling mosquitos and ticks? What are the best concentrations to get? Which ones are the safest to use for children and pregnant women? Can insect repellents damage clothing and gear? Are lotions and wipes more effective than pump sprays or aerosol cans? Are there any natural products that have also proven effective at repelling mosquitos and ticks?

DEET (N, N-diethyl-meta-toluamide) is found in Sawyer Jungle Juice (concentration of 98%), Ben’s 100 Max Formula Insect Repellent (95%) and Repel 100 Insect Repellent Spray (98%). In use since 1946, it’s the most widely used insect repellent today, and highly effective against mosquitos and ticks. The smell of DEET is highly offensive to mosquitos who avoid the scent.

Lower concentration 30% DEET is also available in slow-release lotions, which can last up to 12 hours before needing to be reapplied. Ultrathon 34% Insect Repellent is the most popular long-lasting formulation and ideal for overseas travel to areas infested with malaria-carrying mosquitos because a little goes a long way.

One of the downsides of DEET-based insect repellent is that it will fog plastic lenses on watch faces, smartphones, and glasses. It also dissolves synthetics-based clothing, so be very careful when applying it to keep it away from plastic and clothes you care about.

30% concentrations of DEET are safe for use by pregnant women and small children. When applying DEET to children, don’t let them apply it themselves. Instead, spray it or rub it on your hands before rubbing it on exposed skin. Do not apply near eyes and mouth, and apply sparingly around ears. Avoid applying DEET to their hands because children frequently put their hands in their mouths and eyes. Only apply to skin that is exposed and not under clothing. Avoid the use of DEET near food and water. Wash with soap and water at the end of the day.

Picaridin became available in the United States in 2005 and is a synthetic compound, related in structure to black pepper. It repels mosquitoes, ticks, biting flies, sand flies, gnats, chiggers, and midges. It is widely used in Europe and recommended by the World Health Organization for the prevention of malaria in 40 countries.

The most effective concentration of Picaridin is 20% and will last up 8-12 hours before repeat application is required. Lower concentrations, sometimes found in wipes are only moderately less effective.

Unlike DEET, Picaridin is safe to use around plastics, synthetic apparel, and gear with synthetic coatings such as fishing line, sunglasses, watches, GPS units, or phone screens.

Picaridin is considered to be safe for children as young as 2 months of age and pregnant women. Contact with the eyes and mouth should be avoided, however, and the usage directions followed carefully.

Insect Repellent lotions last considerably longer than sprays of comparable DEET or Picaridin concentrations because the repellent is rubbed into the skin, delaying evaporation. It’s also far more accurate than applying insect repellent with a spray or pump because it’s easy to accidentally miss areas. Wipes also provide an effective way to apply insect repellent to the skin but result in additional waste which must be disposed of after use.

Spray-on and pump sprays containing DEET are also harder to direct accurately when applied and can ruin plastic gear or synthetic garments if the spray is accidentally applied to them. If you accidentally apply DEET to gear and clothing, immediately rinse it off with plenty of water to prevent damage.

Research studies by the Centers for Disease Control, the Environmental Protection Agency, and Consumers Union have shown that Oil of Lemon Eucalyptus (OLE) is the only effective natural insect repellent proven effective against mosquitos and ticks. It’s important not to confuse this product with Lemon Eucalyptus Oil which is a very different product.

OLE, available as Repel Lemon Eucalyptus is effective for up to 6 hours in a 30% concentration. However, OLE has not been well-tested on children, and the CDC and Consumer Union advise against using it on children under 3 years of age.  Natural insect repellents including citronella, spearmint, clove, lemongrass, and other botanicals have not proven to be effective insect repellents for mosquitos and ticks.

What’s your preferred insect repellent for mosquitos and ticks?

SectionHiker is reader-supported. We independently research, test, and rate the best products. We only make money if you purchase a product through our affiliate links. Help us continue to test and write unsponsored and independent gear reviews, beginner FAQs, and free hiking guides.
Previous Desert Water Purification
Next Leki Black Series FX Carbon Trekking Poles Review