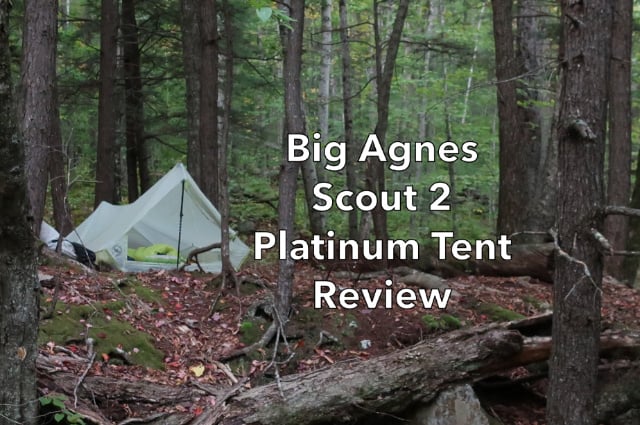 The Big Agnes Scout 2 Platinum is a 17 ounce, single wall trekking pole tent designed for three-season use. It has a pup-style, A-frame shape, with side struts that create vertical internal sidewalls for improved livability and ceiling height. While the tent does not have a front vestibule for gear storage, it has short awnings over the front door and rear window to prevent rain from blowing into the tent or dripping on occupants. Long mesh vents along the sidewalls and peak vents provide airflow through the tent to help mitigate internal condensation. The Scout 2 is made with very thin and lightweight 7d PU coated silnylon and I’d recommend using an ultralight footprint like a sheet of window wrap or an emergency blanket to protect the floor when setting it up on rough ground.

Weighing 17 ounces, you'll be hard-pressed to find a tent that's made with conventional materials and lighter weight and lower price than the Scout 2 Platinum. While not as stormy worthy as heavier tents, it does make a good solo tent for more favorable conditions.

The Scout 2 Platinum is an A-frame single-wall tent with two peaks, the front which is higher than the rear. It is easy to set up because it has a rectangular footprint that is easy to orient and line up. Simply stake out the corners and insert the grips of your trekking poles into the reinforced peaks provided, before staking them out. Staking out the side walls is also recommended to increase the interior headroom and add further wind resistance.

The Scout 2’s front door is solid without an inner screen backer to save weight. Unfortunately, this cuts down on airflow through the tent and makes it impossible to have a view from the front door, unless you open it wide, which you probably don’t want to do if insects are present. However, there is a small mesh screen in the peak above the front door which helps release the water vapor that leads to internal condensation. There’s a much larger mesh window at the rear of the tent that you can see out of, as well as mesh portals, which double as shelves, running the length of the sidewalls below the ceiling. The rear window and side mesh portals can’t be closed to block airflow, effectively limiting the tent to three-season use.

The front door is connected to the tent at the peak and unzips along the right side (facing out) and the bottom. If you happen to be sleeping on the left side of the tent and want to get out at night, you have to reach across your partner to open the zippers, which will almost certainly wake them up. The bottom zipper also has a tendency to jam on the lightweight fabric, unless you’re quite careful when opening or closing it.

The front door and rear windows are covered with awnings. The front awning prevents water from draining onto your head when you enter and exit the door in the rain, while the awning over the rear window deflects rear-facing winds and keeps angled rain from entering. Both tent peaks have a top guy out loop to anchor the peak with a second longer guyline, as well as loops along the end seams for additional reinforcement in windy conditions. Given the lower profile of the rear of the tent, we recommend pointing it into the wind if you have to camp in an unprotected campsite.

The interior sidewalls of the tent are vertical to provide more interior room and prevent the ceiling from touching the top of your sleeping bag or quilt. They’re held up by fiberglass struts inserted into the tent corners. The height of the sidewalls is 16 inches, but the walls collapse in height if you put anything heavy into the side mesh pockets, in addition to reducing the overhead ceiling clearance and airflow. I’d recommend against using these pockets at all and that you store your gear elsewhere in the tent.

The tent comes with a stuff sack, stake bag, and aluminum stakes (8). It’s also been fully outfitted with guylines and tensioners, so you can pack it and go. However, the included stakes don’t have hooks and aren’t optimized for use with the tent’s cord-based guylines. I replaced them with NEMO Airpin Stakes and MSR Needle Stakes, which have hooks and are much better for this purpose.

The Scout 2 Platinum is 48″ wide at the front, tapering down to 38″ wide at the rear. It’s 82″ long with a front peak height of 45″, a rear peak height of 33″, and a sidewall height of 16″. While that sounds like enough space for two people, the actual limiting factor is the A-frame style slope of the ceiling and its effect on overhead clearance, which decreases as you get nearer to the side walls. The silnylon ceiling also has a tendency to sag at night, which further lowers ceiling clearance and increases the likelihood of condensation transfer to your sleeping bag or quilt. Big Agnes addresses the issue of rainfly sag on their regular tents with panel guyout points, but they’re curiously absent on the Scout 2 where they’d have a positive impact.

If you want to sleep two people in the Scout 2, I’d recommend that you stick as close together under the center ridgeline as possible where the ceiling height is the highest, and use the space along the sidewalls for gear storage. You’ll also want to use tapered sleeping pads to fit into the 38″ width at the rear of the tent. You can sleep 2 people in the Scout 2, but you better be pretty friendly.

The low weight and space inside the Scout 2 Platinum make it a better shelter for one person in my opinion, which is how I recommend using it. In either case, you’ll want to sleep with your head at the door end of the tent where it has the most headroom and so you don’t have to turn around inside the tent to get in and out of a sleeping bag. The front door is low enough though that you’ll still have to crawl to get in and out.

While Big Agnes recommends using the side mesh panels as pockets, doing so decreases airflow and lowers the ceiling near the sides of the tent. Given the absence of any other storage pockets and a front vestibule, you’re better off storing your gear on the floor of the tent around you if you can’t or won’t leave it outside in your backpack.

While the tent fabric is lightly colored and very thin, it’s not transparent and still provides a fair amount of internal privacy. It also dries very quickly, inside and out, when exposed to sunlight, so you don’t have to carry around a sopping wet tent all day. The tent floor is very slippery, however, and I recommend placing a piece of closed-cell foam (like the Gossamer Gear Thinlight Pad) under an inflatable sleeping pad, if you use one, to prevent it from sliding around at night.

The design of the 17 oz Scout 2 Platinum and the Dyneema 11 oz Scout 2 Carbon (also available) are both based on the classic 26 oz Big Agnes Scout UL 2 (see our vintage review from 2015), which was a more affordable, lightweight pup-style tent. While there are clear similarities between the designs, the Scout 2 UL was much longer and wider, had much higher sidewalls, longer side awnings providing more coverage for the mesh vents underneath, and required the front and rear poles to be set at the same height, not one longer than the other. While the new Scout 2 Platinum is certainly lightweight, it’s also considerably more expensive and less spacious than its ancestor, the Scout 2 UL.

The Big Agnes Scout 2 Platinum is not a perfect tent, but I still like using it for solo backpacking because it’s lightweight, packs up small, and is very easy to set up. While I wish it had a full front vestibule and a screened front door, the interior has lots of space for gear storage and I can usually manage any tent condensation issues with good site selection or a small camping towel. The Scout 2 also reminds me of the ground tarps I used to use in the past, but it’s a big step up in terms of comfort and ease of setup. I don’t think the Scout 2 is particularly good two-person tent because the single front entry and door make it awkward to get in and out of, the ceiling hangs too low as it approaches the sidewalls, and any tent condensation issues are worse with two occupants because there’s less room to avoid coming in contact with it.

How’s the Scout 2 compare with other ultralight tents? Weighing 17 ounces, you’ll be hard-pressed to find a tent that’s lighter weight and lower price than the Scout 2 Platinum. I’ve listed the Scout’s closest competitors to give you a flavor of the competition. These are all good tents, but you’ll need to give up weight to find something less expensive or purchase a higher price Dyneema tent to shed more weight. When choosing between these alternatives keep in mind the 7d silnylon that Scout 2 Platinum is made from. If you’re hard on gear or camp in areas with abrasive soil and ground debris, I’d advise using a footprint with the Scout 2 Platinum or choosing a tent with a more durable floor.

Disclosure: The author purchased this tent.

SectionHiker is reader-supported. We independently research, test, and rate the best products. We only make money if you purchase a product through our affiliate links. Help us continue to test and write unsponsored and independent gear reviews, beginner FAQs, and free hiking guides.
Previous Backpacking Gear Repair Hacks
Next Backpacking a Sandwich Dome Loop