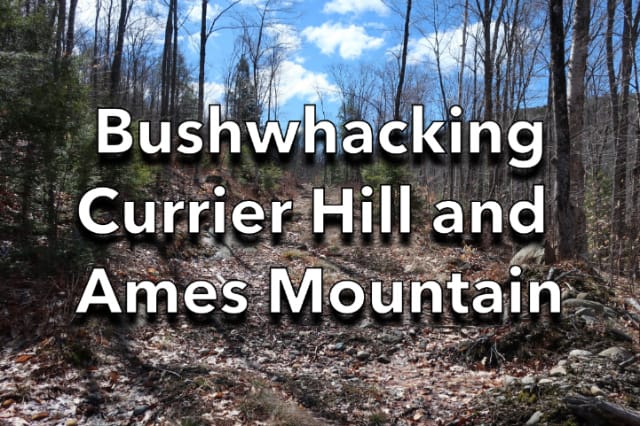 Currier Hill and Ames Mountain are two trailless peaks in the Mt Moosilauke area of the White Mountains near Mt Carr. They’re adjacent to one another and make a nice off-trail loop if you like exploring new areas without the help of a trail.

Why would you ever want to do that, you might wonder? For one, it’s good practice for when you have to use that compass you carry around with you, even if you stick to hiking trails most of the time. In addition, you’d be surprised what you come across when you step off-trail, from waterfalls and unexpected viewpoints to moose antlers and historic artifacts. If you relish discovering the unexpected, hiking off-trail might be for you.

While Currier and Ames are inside the boundary of the White Mountain National Forest, it wasn’t entirely clear how to access them in an efficient way. There were a few forest service roads that lead into the area, one well-marked hiking trail some way off, and a few squiggly lines on the map that could be anything from old logging roads to hiking trails. You don’t always know which is which when you look at a map without showing up and reconnoitering it in person.

When planning, I identified a squiggly line marked as the Clifford Hill Trail which climbed an adjacent peak. One of its spur trails headed in the direction of the Currier Hill, so I decided to follow it. This trail is only shown on one of the dozens of maps I have access to in Caltopo or GaiGPS, but it was the best option and looked like it was worth checking out.

When I arrived at the intersection of Eastside Rd and Red Oak Hill Rd outside of Wentworth, NH there was an active logging operation in progress that looked like it was using the Clifford Hill Trail to provide access to the forest. I hiked up that dirt road, past some heavy equipment, and chose a number of offshoots that looked like they were headed toward the base of Currier Hill. I wasn’t hiking this blind but had my GaiaGPS app in hand so I could see where I was headed.

What was once the Clifford Hill Trail was now an unmarked muddy network of logging roads used to drag trees out of the forest. The track was steep, eroded, full of brambles and I doubt it had ever been a hiking trail. Still, hiking the 800′ of elevation gain on it was a lot easier than climbing the same elevation off-trail.

The branch I was hiking on petered out at a landing next to Martin’s Brook, which is a lovely sequence of cascades and a nice little waterfall. It was running a bit high from the spring thaw, so finding a good crossing point took some scouting, but I eventually made it across with dry boots. The bushwhack really got started when I stepped on the other bank.

I clambered up from Martin’s Brook to start the 500′ climb to Currier Hill’s summit. The woods were fairly open, but I had to cross numerous streams draining the spring thaw. Rather than tackling the slope head-on, I climbed it on a diagonal, switching back and forth, to make the going easier and to save my legs. The forest floor soon gave way to moss-covered rocks as I neared the summit.

The top of the hill had a rocky spine, about 20′ feet tall. When I encountered it, I jogged right until I found a spot where it was easy to clamber up and proceeded in the direction of the summit. I saw blaze orange of the summit canister from way off and made my way to it, signing in, and returning the canister to its tree. The canister contains the names of people who’ve climbed this peak and the date they summitted. It’s a short list, but I knew most of the people on it.

Ames is a short distance away from Currier, on the other side of the northern col. Getting down to that col wasn’t as straightforward I’d hoped. I scouted a descent down the right side of Currier, but that would have put me on the western side of Ames instead of the eastern side, which looked easier. I backtracked and scoped out descent down Currier’s left side, but that cliffed out and was way too steep to descend. Going straight also looked like it cliffed out.

In the end, I headed down the west side of Currier into the col and angled sharply to the east side of Ames for the climb, which was fairly easy. There was a cairn at the high point of Ames, not a canister though.

From Ames, I hiked down to the col and then turned east to hike around the bottom of Currier. I encountered a boggy area between the two peaks and had to contour around it. But once past it, I descended to Martin’s Brook and re-acquired the Clifford Hill Trail which I followed back to the road.

This turned out to be a moderately challenging bushwack but straightforward enough once you figured out the best place to start the route.  I think the thing that appeals to me the most about these hikes is the novelty of what you encounter, something that you can’t really plan around. There are a lot of real-time decisions when it comes to route selection and even foot placement that are worth getting experience with if you plan to hike a major off-trail route someday.

Philip Werner has hiked and backpacked over 7500 miles in the United States and the UK and written over 2500 articles as the founder of SectionHiker.com, noted for its backpacking gear reviews and hiking FAQs. A devotee of New Hampshire and Maine hiking and backpacking, Philip is the 36th person to hike all 650 of the hiking trails in the White Mountain Guide, a distance of approximately 2500 miles, completing a second round in 2021. Philip is the author of Backpacking the White Mountain 4000 Footers, a free online guidebook of the best backpacking trips in the White Mountains in New Hampshire and Maine. He lives in New Hampshire.
Previous Exped Lightning 60 Backpack Review
Next How to Get Pro Deals and Group Discounts from Outdoor Gear and Clothing Manufacturers

SUPERFEET: 25% Off Sitewide Plus Free Shipping thru 6/5.