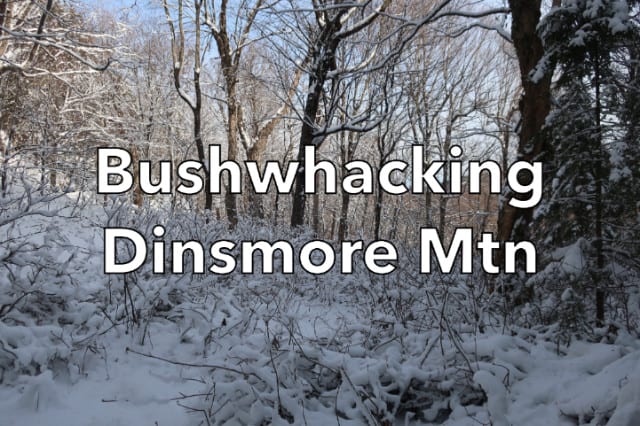 Dinsmore Mountain is adjacent to Mt Israel in the Sandwich Range. It’s a trail-less peak, so you have to bushwhack to the summit. Dinsmore is on the NH500 highest peaks list which I’ve started working on. I hiked this mountain with my friend Ken, who is also working through the list. He has too much time on his hands and I view it as my responsibility to keep him out of trouble.

Ken and I discussed two possible approaches to Dinsmore:

The first is to start at Mead Base, a rustic conference center and campground run by the Wonalancet Out Door Club, which serves as the trailhead for the Wentworth Trail which climbs Mt Israel. This is probably the easiest route because you can hike up the Wentworth Trail, which is graded and blazed, to your starting elevation before heading off trail for Dinsmore. The road to Mead base open in winter and there’s parking available year-round.

You can also approach the Dinsmore from the West, starting from Sandwich Notch Road, which is a very rough dirt road that is unmaintained in winter. I’ve driven it multiple times in non-winter conditions in low clearance passenger cars and they were never quite the same afterward. The road is pretty dicey in winter and spring when it’s icy, even with a higher clearance vehicle and four-wheel drive. While there are a few spots where you can pull off and park along the road, heading in from the west requires climbing the peak entirely off-trail and is more strenuous.

We opted for first of these because it was the easier of the two and we didn’t know what the driving conditions would be like on Sandwich Notch Road with the recent snowfall we’d had. The Forest Service usually closes the road at some point during the winter, but you never know exactly when.

We headed up the Wentworth Trail climbing 1500′ to 2400′ above a prominent cliff band, indicated on the map above, by the purple and red colored slope angle shading at that elevation. There are usually debris under a cliff, so it usually takes less energy to bushwhack above it.

We entered the wall of spruce trees bordering the trail, flipping up our rain jacket hoods to avoid getting snow falling off the limb down the back of our necks. We passed through an area of hobblebush that had been browsed by moose before the woods opened up and could see where we were heading.

This route wasn’t difficult to navigate because we just needed to head due west to reach Dinsmore. If you look at the map or the picture of the mountain above, you can see a short hump to the east of the summit and a col between the two. We hiked through that and back up to the main summit, climbing about 200′, before reentering the spruce guarding the mountain’s high point.

When we came to the wall of guard spruce, Ken had been hesitant to plunge in, since the trees were snow-covered. A lot of summit areas are covered in blown down trees which are both difficult and potentially dangerous to hike through, so his caution was justified. I spied an opening in between the trees and found that the spruce thinned out considerably on the other side.

We alternated leading through the spruce, climbing up the gradual slope until we spied the summit canister. After signing the register and eating lunch, we headed back the way we’d come, following our tracks in the snow. We hiked back to the exact spot we’d left the Wentworth Trail and hiked back down Mt Israel to our cars at the Mead Center. This had proved to be an easy peak to bushwhack.

As a rule of thumb, I don’t pay much attention if any to other people’s bushwhack trip reports when planning a trip because I like to plan my own routes. Still, these made interesting reading after the fact and show that there are many different ways to bushwhack to the same peak.

Philip Werner has hiked and backpacked over 7500 miles in the United States and the UK and written over 2500 articles as the founder of SectionHiker.com, noted for its backpacking gear reviews and hiking FAQs. A devotee of New Hampshire and Maine hiking and backpacking, Philip is the 36th person to hike all 650 of the hiking trails in the White Mountain Guide, a distance of approximately 2500 miles, completing a second round in 2021. Philip is the author of Backpacking the White Mountain 4000 Footers, a free online guidebook of the best backpacking trips in the White Mountains in New Hampshire and Maine. He lives in New Hampshire.
Previous Bushwhacking West Moat Mountain and Spruce Hill
Next Minus33 Wool Baselayers: Isolation Midweight 1/4 Zip and Ticonderoga Lightweight Crew