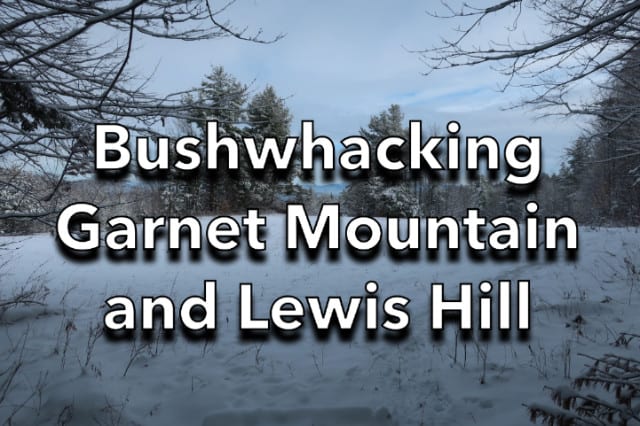 Garnet Mountain and Lewis Hill are two trailless mountains just outside the quaint town of Bethlehem, NH. Both are on the New Hampshire 500 Highest peak list that my friend Ken and I are working through. As he says, “There are 2000 mountains in New Hampshire. Why would you climb the same ones over and over?” That’s why we’re working on this list, rather than griding the White Mountain 4000 footers.

Lewis Hill is almost entirely on conservation land, so access is not an issue. The summit of Garnet Mountain is also but abuts private property that you need to cross to get to the peak. While it is posted, “No Hunting”, the local signage indicates that hikers are welcome. Sill we made every effort to stay out of sight of the adjacent private residence.

We parked at a log landing (an open area where logs were once loaded onto trucks) at height of land on Lewis Hill Road, in between both peaks. Being winter, this is the preferred direction of entry to both peaks, as long as you have enough clearance to get in and out of the lot.

There’s a logging road that leaves the landing and heads uphill, so we started our bushwhack there. There was about 6-8″ of powdery snow, so we were in snowshoes for traction. There were a lot of blowdowns down across the logging road so we followed it for a while before heading into the trees and working our way towards the summit.

I stepped out of the woods and noticed a Yellow blaze painted on a tree. It marked a trail headed in the direction we wanted to go, so I followed it, checking it against the map and my compass as it snaked through the woods. It took us right to the summit. That was unexpected.

We searched the summit area for a canister and logbook but couldn’t find anything, so we followed the yellow trail back down all the way back to our cars. No kidding. Instead of heading up the logging road from the landing, stay to your right and follow the cut in the trees to find the yellow trail, which is both blazed and taped.

We crossed Lewis Hill Road and continued across the big open field before entering the woods. Ken came up to a stream that we had to cross. It was frozen over but the ice broke if you pressed down on it with trekking poles. We scouted a better crossing and I crossed first, stepping on some branches midstream before clambering up a rock on the other side. We found a broken bridge nearby on the return trip, which we managed to cross instead.

There’s was a big marshy area on the other side of this stream, but we came upon a log bridge (a bridge made of stacked logs) that spanned the entire area. That was a lucky find. The bridge was easily 120 feet long, so quite deliberate.

Once across, we came to an open swath of forest, which we assume separated the private property to the left from the conservation land to the right. This led to a big open field, before starting to climbing back into the forest. From there, we followed several logging cuts before climbing up the ridge through fairly open woods. There were still a lot of forest debris underfoot, which made the snowshoeing somewhat challenging. At one point, a branch lodged itself in my snowshoe and I had to take it off in order to pull it free. It was really on there.

There’s a false summit on Garnet, before the actual summit. We climbed that, dipped into a shallow col, and then climbed to the summit. We found the canister and logbook quite quickly and signed in. After a quick lunch, we hiked back over our tracks, but veered slightly right after the log bridge, following the blazed property line. This led us to a broken bridge, which we crossed carefully. From then it was a short walk back across the field to the log landing and our cars.

Philip Werner has hiked and backpacked over 8500 miles in the United States and the UK and written over 2500 articles as the founder of SectionHiker.com, noted for its backpacking gear reviews and hiking FAQs. A devotee of New Hampshire and Maine hiking and backpacking, Philip is the author of Backpacking the White Mountain 4000 Footers, a free online guidebook of the best backpacking trips in the White Mountains in New Hampshire and Maine. He lives in New Hampshire. Click here to subscribe to the SectionHiker newsletter.
Previous MSR Revo Explore Snowshoe Review
Next When are hiking boots better than trail runners?