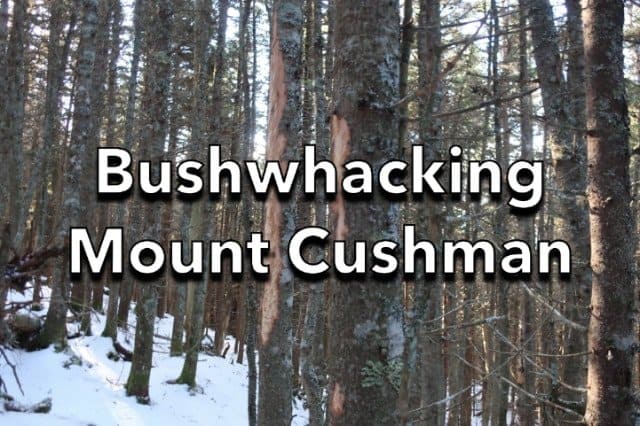 Mount Cushman is a 3220′ mountain on the New Hampshire 200 Highest List. It’s a trailless mountain so you have to bushwhack to climb it. It’s located just south of Mt Moosilauke on the edge of the Hubbard Experimental Forest, which is one of the wilder and less-visited parts of the White Mountain National Forest.

There are two ways to approach Cushman. The first is a wayside pull-off along Rt 118 to the north and the other is from Hubbard Brook Road, which is an east-to-west seasonal fire road that runs south of the peak. This being winter, parking along Rt 118 was a sure bet so we opted for that route.

The best point to leave the road at height of land on Rt 118 before heading south and climbing Cushman’s western ridge. The ridge curves to the east a few hundred feet below the summit, but as long as you keep climbing uphill you’ll stay on the right bearing.

We left Rt 118 and dropped down a steep embankment by the side of the road and immediately came across an old logging road running heading south. The snow depth was borderline (about 4″ of powder) and while we carried snowshoes for this hike, we ended up not wearing them.

We followed the road for a short time before veering south toward Cushman’s ridge. Despite a preponderance of hobblebush lower down, the woods were wide open almost all the way to the summit area.

This was unexpected because we’d heard from friends to expect scrappier woods from the west and pencil woods near the summit. I think we avoided both of those by hiking up the spine of the ridge rather than coming in from a more westerly or eastern direction. We could see denser and steeper terrain in both of those directions. 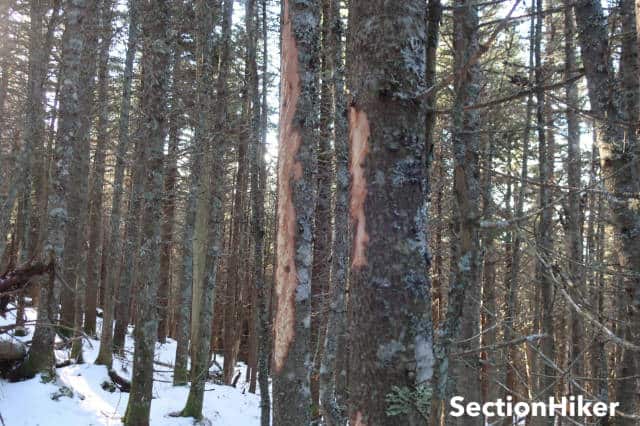 The climb up the spine of the ridge was surprisingly gradual. We noticed numerous places where moose had stripped bark from the trees as well as numerous moose and deer tracks.  This isn’t a heavily peopled part of the National Forest, so I’m not surprised that they frequent the area.

The gradient steepened as we neared the Cushman’s summit and started looking for the summit canister. This required some searching since there isn’t a well-defined summit cone. I eventually spied the PVC tube in an unlikely spot, but it was frozen shut so we couldn’t sign the logbook. Oh well.

We had a quick lunch and then followed our footsteps back the way we’d come. That’s one of the advantages of winter bushwhacking. You can follow your tracks out instead of getting lost twice on the same hike! Think I jest?

I think we were a little disappointed at how easy this bushwhack was, since it only took us 3 hours round trip, but that would change on our next hike farther north.