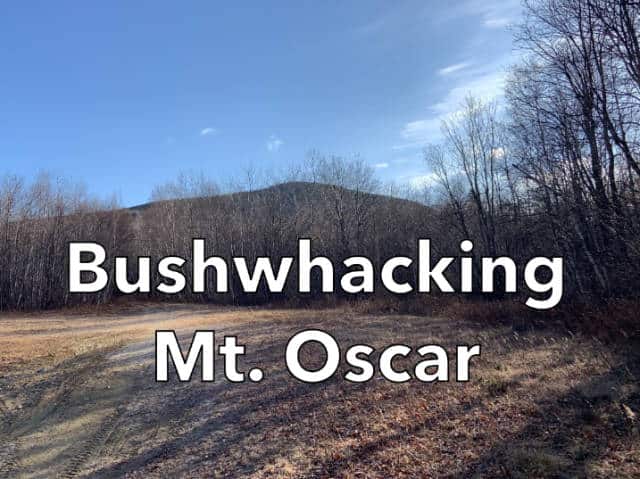 If you hike in the White Mountains, you’ve probably driven by Mt Oscar a million times without knowing its name. It the northernmost peak at the Bretton Woods Ski Resort (they call it West Mountain), adjacent to Mt Rosebrook, which is the middle peak. Oscar is also popular with rock climbers who climb up its western cliffs.

While you can hike up the ski slope to the summit of Mt Oscar, it’s a lot more entertaining to bushwhack the peak from the other (west) side starting near the trailhead to Middle Sugarloaf on Zealand Rd. Both Oscar and Rosebrook are on the NH 500 Highest List so you can bag them at the same time if you feel like it.

This is a map of my route, enhanced with slope shading. Areas that are purple and a darker shade of red or orange have very steep gradients and best avoided because they’re cliffs. Areas colored yellow are also steep, but less so.

In planning my approach from the southwest, I wanted to climb up to the saddle between Oscar and Rosebrook by following a route with the gentlest gradient to make it easier to hike.

Saddles are usually quite flat, which can make it hard to tell where you are visually when you hike through one. My plan was to hike to the area slightly above the saddle on the Rosebrook side, so I’d be able to see the point where the gradient (descending from Rosebrook) flattened into the saddle. Knowing where I was, I could then use a compass bearing to stay in the middle of the saddle, which I presumed would be choked with vegetation, and make my way over to the Oscar side and climb its summit.

From Zealand Rd, I got onto Fire Road #155 and followed it past a cairned climbers path that leads up to Oscar’s cliffs. I kept walking until I could make out the ridge connecting Oscar and Rosebrook through the trees. Autumn is the best time to bushwhack because the leaves are down and you can see where you’re going.

I started looking for a good entry point to enter the woods, but there were overgrown logging cuts, probably about 10 years old, to the left of the road, full of densely-packed young trees that are hellish to bushwhack through. I continued down the road until I found a narrow strip of hardwoods between two of these logging cut areas and headed toward Rosebrook, looping around and behind the logging cuts. The woods were nice and open with widely spaced mature trees and a dense carpet of dried leaves.

I started climbing gradually up the side of Rosebrook, climbing diagonally to get closer to the saddle and away from cliffs that I could see overhead, much higher up. I hit a band of spruce trees at 2200′ and climbed through it until about 2650′. This was a painstakingly slow process because I couldn’t see my feet below the waist-high spruce and had to lumber over blowdowns and boulders that I came across but couldn’t see until I was on top of them.

But I could see the curve of the slope to my left, where Rosebrook folds itself into the saddle so I had a pretty good idea of where I was and figured I’d arrived when I hit 2650′ and the gradient flattened out. From here I started heading toward Oscar, dropping slightly in elevation as I anticipated, but bushwhacking through head-high spruce and more pencil woods.

Then I stepped out of the spruce and onto what looked like a trail running between Rosebrook and Oscar. I hadn’t expected one to be there, but I wasn’t complaining. I quickly saw blazing that indicated that it was a snowshoe and hiking trail and followed it to the Oscar summit, just beyond a huge ski gondola.

The summit area on Oscar is really pretty with wide expanses of open ledge and excellent views of Middle Sugarloaf and Mt Hale. I enjoyed the view until I got cold and then headed back down. Rather than taking a new route back, I basically backtracked the way I’d come, once again descending through the spruce band to the hardwoods below. Once I was down to 2000′, I had to loop around the logging cuts again before regaining the fire road and walking back to Zealand Rd.

As a rule of thumb, I don’t pay much attention if any to other people’s bushwhack trip reports when planning a trip because I like to plan my own routes. Still, these made interesting reading after the fact: