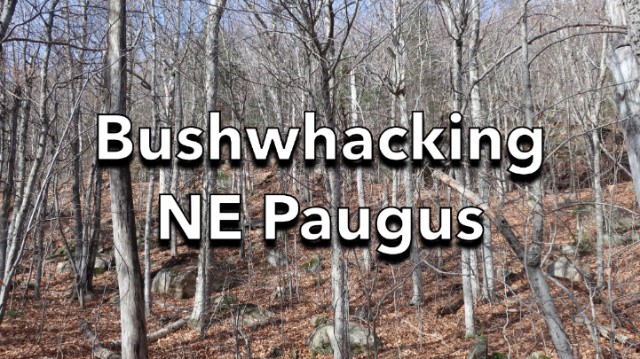 Northeast Paugus is a mountain located off the Bolles Trail, near Mt Chocorua. Actually, it’s a knobby sub-peak of Mt Paugus, but well worth a climb of its own with a jaw-dropping view of Mt Chocorua and the Sisters Ridgeline from its east-facing summit ledges. A trailless peak, this is a moderately difficult bushwhack that is a lot more challenging than a quick glance at the map would suggest.

I’ll admit, I didn’t do a lot of research planning out this hike because I didn’t think it would be that difficult. I got lucky, in that I was able to adapt to the landscape I found unfolding before me. My plan had been to hike to the height of land and then bushwhack off-trail up the side of NE Paugus and along the summit ridge to the peak’s high point. But I hadn’t anticipated the cliffs that guard that climb or the dense blowdowns on the mountain top.

I approached the peak from the north on the Bolles Trail, starting at the Champney Falls Trail-head off the Kancamagus Highway. The trail climbs up one side of the range and down the other, crossing a stream bed many times on the ascent. Parts of it also coincide with a snowmobile route that links the north and south sides of the range. There are a couple of tricky spots where the trail has been washed out by the stream, but I’ve hiked the Bolles Trail several times and knew what to expect.

As I gained elevation, a band of cliffs appeared that had the potential to confound my planned approach. I knew they were there from past experience, but it hadn’t really registered that they could block my approach. Thankfully, the cliffs petered out by the time I reached the height of land, at 2400′. I hoped I’d dodged that bullet.

I turned right (west) and started climbing through open birch glades with dense dried leaf litter under my feet. I soon found that the terrain was too steep to climb, so I vectored left to find a more gradual slope that I could get up. There were cliffs immediately overhead and to my right but I contoured around them.

The leaves were down and I was able to see the northeast knob of Paugus through the trees. It looked a lot farther away and higher than I’d imagined, but being able to see it significantly reduced the uncertainty I’d been feeling about my planned approach. I continued climbing, slabbing my way up the slope until I got to the open ridge connecting the peaks to the cliffs, which were now behind me.

That ridge walk was a piece of cake through open forest although I encountered some hobblebush as I climbed higher. There was another ring of ledge around the summit, but I saw daylight through the cliffs, which gave way to more open woods. I arrived at the top of the mountain which was flat and covered with dense spruce trees and many blowdowns, which are dead trees laying on the ground where they’d fallen.

When you get to the top of a trailless mountain like this, you want to find the highest ground in order to reach the summit. Many of these trailless peaks have glass or plastic jars at their summits (called canisters) that hold a logbook with the names and dates of people who’ve climbed them previously. It’s a game and good fun.

The problem is in finding the high ground since the incremental elevation gain is usually less than that shown on your topographic map. In other words, having a GPS won’t help you find the summit. Instead, you have to search for it by walking around until you find it. That’s easy if the forest is open around you, but the top of NE Paugus was densely vegetated and I only had about 1-2 feet of visibility around me.

I tried bashing through the trees and debris, but it was pretty hopeless and borderline dangerous because any of the rotting trees and vegetation I stepped on could collapse underneath me. Being alone, I decided to play it safe. I quickly decided I needed to backtrack out of the summit mess and see if there was a way to get around it at a lower elevation.

That was the key. I hiked down the northwest side of the mountain losing maybe 20 or 30 feet of elevation, but the woods opened up and I could see where I was going. There was still plenty of debris around me, but I could now see the profile of the summit plateau and where the high point was. I climbed back up to that point and immediately found the canister, lying on the ground where it’d fallen off a tree.

I left my name and the date and this message in the jar: “I think I just experienced a right of passage”, spelling mistake and all. I gather that other visitors to this peak have had similar experiences. I refastened the jar to the tree and then hiked out to the nearby summit ledges where there was a good view of Mt Chocorua and the Sisters ridge.

After some lunch, I reversed my route for the most part and hiked back the way I’d come. Northeast Paugus is a worthy destination and a good bushwhack. I think I’ll come back to this one again.

On hindsight, I would have benefitted from doing a little bit more upfront planning on this hike. The slope angle shading tool in Caltopo is pretty handy for detecting really steep terrain. While I’m satisfied with the route I took, there’s also something to be said for bushwhacking from the North starting out at the Kanc and staying off-trail all the way. That direction looked pretty open. Maybe I’ll try that next time.

SectionHiker is reader supported. We independently research, test, and rate the best products. We only make money if you purchase a product through our affiliate links. Help us continue to test and write unsponsored and independent gear reviews, beginner FAQs, and free hiking guides.

Philip Werner has hiked and backpacked over 8500 miles in the United States and the UK and written over 2500 articles as the founder of SectionHiker.com, noted for its backpacking gear reviews and hiking FAQs. A devotee of New Hampshire and Maine hiking and backpacking, Philip is the author of Backpacking the White Mountain 4000 Footers, a free online guidebook of the best backpacking trips in the White Mountains in New Hampshire and Maine. He lives in New Hampshire. Click here to subscribe to the SectionHiker newsletter.
Previous Snowshoeing for Beginners Guide
Next Cold Cold World Chaos Backpack Review