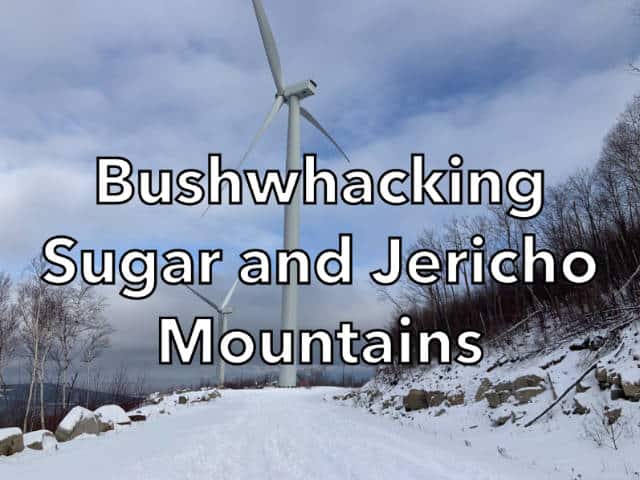 Sugar Mountain and Jericho Mountain are located in Jericho Mountain State Park, just outside Berlin, NH (pronounced Ber’-lin), the “City that Trees Built.” While it’s just a short distance from Mt Washington, Berlin has a “border outpost” feeling to it. It’s also the southern hub for logging, ATV, and snowmobile traffic for the “north country” up to the Canadian Border, Vermont to the west, and Maine to the east. While the city has been spruced up in recent years, it’s very evident that most of the businesses and residents have fallen on hard times.

However, the city does have a wealth of recreational opportunities surrounding it which help sustain the local economy, including Jericho Mountain State Park, which has a well-developed ATV and Snowmobile trail network, a campground, and a lake. That land parcel is adjacent to the White Mountain National Forest, Moose Brook State Park, and the nearby Nash Stream Forest, opening up a huge swath of publicly accessible land for hiking, backpacking, mountain biking, fishing, and hunting, and more motorized recreation.

Jericho Mountain State Park has several peaks on the NH500 highest list including Sugar Mountain, Jericho Mountain, and Mount Forist (also spelled Mt Forest.) My friend Ken and I set out to climb all three of them on the first day of winter, 12-21-2020, the day of the year with the least daylight. We ended up bagging Sugar and Jericho after a very long day of hiking and snowshoeing, leaving Mt Forist for a return trip.

The ATV and Snowmobile trail network in Jericho Mountain State Parks poses some unique challenges to hikers, who might be interested in using the trails for access.

I found the State Park maps online and sent them to Ken. I then figured out a good place to park our cars to access the trail network and found a GPS app that we could use to trace our way through the trail system (See Maplets). But given the trail network, there were few options for which trails to follow other than the obvious. I also carried a hard copy, three compasses, and the usual suite of navigation apps and maps I use on my phone. Ken has a similar set of navigation tools and apps.

We knew we wanted to nab Sugar first, because it was the farthest away and that we wanted to work our way to Jericho and then Forist from there. While there were two short bushwhacks on this trip, we stayed on the snowmobile network for most of this trip, about 13 miles of the 13.6 miles we hiked. It was a means to an end.

We hiked this route on a Monday morning and didn’t see anyone out snowmobiling all day. We’d been expecting to find about 4″ of snow in the ground, but it was closer to two feet at elevation and 1 foot lower down. Most of the trails were lightly broken out with snowmobile traffic so we could bare-boot them, but there was one multi-mile segment that we had to break trail in snowshoes. Good thing we carried snowshoes, even though we hadn’t expected to need them.

We hiked up to Sugar Mountain first (counter-clockwise on the top topo), which required a long road walk, along Corridor A, until we came to a chained gate 1.75 miles in. We walked around it and continued up the road, following a solitary moose’s tracks and breaking trail in our snowshoes for 2 more miles until we reached height-of-land and the ridge we planned to bushwhack to Sugar’s summit.

There, I stepped off the road into the woods and sank down in the snow about a foot, even though I was wearing snowshoes. We only had to climb about 70 feet of elevation to get to the summit, so I powered through until we got to the peak’s flattish summit area. We started searching the highest “bumps” looking for the summit canister and the logbook to sign in. Ken found it first and we scrolled through the log to see who’d been up to visit. It contained the usual names, including a couple from the day before who’d snowshoed up the other side.

We had a snack and snowshoed back the way we’d come for two more miles until we came to a junction with a trail named “Heat Stroke.” We headed up it toward Mt Jericho, our next conquest. We came to an unmarked trail junction that was also not on any of the maps we had. We decided to turn left and hike it…call it bushwhackers intuition or luck…because we suspected that it was headed in the direction we needed to reach Jericho. Follow enough unmarked and unmapped logging roads in the woods and you get a feel for this kind of thing.

This brought us to the Bathtub Trail and then the Kilowatt Trail which climbs up Mt Jericho. Jericho has five huge 300-foot windmills on top. The powers that be moved heaven and earth to create platforms for these huge structures and giant roadways that ring the top of the mountain, with one very odd exception. The top of the mountain is still wooded and completely natural. That was the part of the mountain that we had to bushwhack.

We walked up the Kilowatt Trail which is a very wide road that was clearly purpose-built to transport the windmills to the top of the mountain. When we got to the top of Kilowatt, the windmill blades were spinning ever so slowly, but they still looked like creatures out of “The War of the Worlds” to me. We’d have to pass underneath them to get to the summit. The sign: “Danger, Falling Ice” did little to calm my anxiety. I walked around the first giving it a wide clearance. There was no way to avoid walking under the second, so I walked quickly past it.

The summit cone on Jericho is ringed by a rock cliff, created when they carved out the platforms to erect the windmills. We started walking around the mountain top clockwise, looking for a place where we could clamber up the cliff and start out bushwhack to the summit. I found a decent spot and managed to kick steps to get to the top, which led to an open swath of trees headed uphill.

The woods were scrappy, but Ken wove a path to an open field near the summit. He quickly found a short path through the spruce to the summit canister and logbook and we signed in. We thought about continuing to Mt Forist, which was now in sight below us but decided to call it a day, so we could still make it back to our cars before sunset. We headed back down the Kilowatt Tr and followed the Turbine Road back to Corridor A and then out.

This wasn’t the sort of “usual” off-trail, wilderness bushwhacks that we both prefer, but it was still a satisfyingly long hike and ramble to a part of New Hampshire that we’d never known about before.

Philip Werner has hiked and backpacked over 7500 miles in the United States and the UK and written over 2500 articles as the founder of SectionHiker.com, noted for its backpacking gear reviews and hiking FAQs. A devotee of New Hampshire and Maine hiking and backpacking, Philip is the 36th person to hike all 650 of the hiking trails in the White Mountain Guide, a distance of approximately 2500 miles, completing a second round in 2021. Philip is the author of Backpacking the White Mountain 4000 Footers, a free online guidebook of the best backpacking trips in the White Mountains in New Hampshire and Maine. He lives in New Hampshire.
Previous Trekking the Eagle Walk in Austria
Next Review of Tenkara Bum’s Tenkara Rod Cases