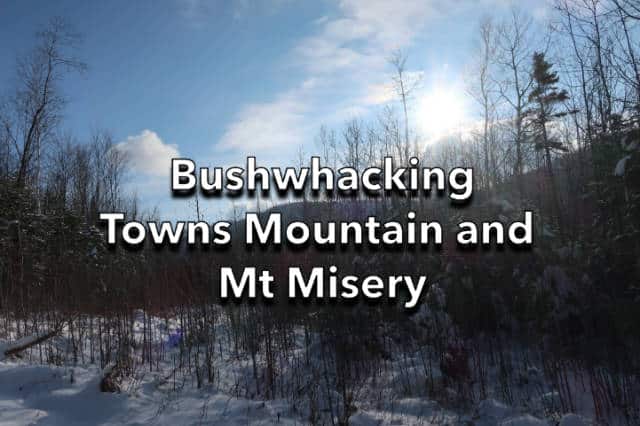 Towns Mountain and Mt Misery are located north of Littleton, NH, within spitting distance of the New Hampshire and Vermont border. They’re both on the New Hampshire 500 Highest peak list that my friend Ken and I are working through. This being winter, we’re picking off the peaks that are closest to home and can be hiked on day trips. When spring rolls around, we’ll have to travel much longer distances to reach climb the mountains closer to Canada, Maine, and Massachusetts.

When bushwhacking in winter, it’s a good idea to hike with a buddy in case you have an accident and need assistance. Bushwhacking isn’t without peril. It’s quite easy to take a tree branch in the eye or to hurt your leg if you step on a rotten tree trunk that gives way under you. Those dangers are magnified in winter when you’re in the middle of nowhere and off-trail in rural areas.

On paper, this looked like a pretty straightforward loop hike. I’d scouted a place for us to park along Mt Misery Rd on a previous trip up north and there were a number of snowmobile trails we hoped to take advantage of to get to the bottom of the mountains. Actually, this trip turned out to be a little bit more challenging because conditions on the ground didn’t quite match those depicted on the map.

We hiked up Mt Misery Rd a short distance and entered the woods, coming out on the Corridor 5N snowmobile trail. While it’s signed as such, I’m pretty sure that that trail has been moved due to erosion that we quickly encountered as we headed up it. The middle of the trail looks like a flash flood blew through and scoured the middle trail down to bedrock. We were hiking in snowshoes in calf-deep powder, breaking trail because the snowmobile trail was evidently unused.

Ken and I conferred about the best way to climb Towns Mountain and decided to head up to the saddle between its two peaks, before heading north towards the high point. The climb was steep and we took turns breaking trail. When we got to the saddle, we unexpectedly found an ATV trail headed right up the middle of the peak which we followed for a while. The name of the game in bushwhacking is energy conservation, so if you can find a road or logging cut to follow, it pays to follow it, provided it’s headed in your direction. You don’t always know that however, so you have to maintain a good awareness of your bearings lest you stray from your target.

We left the ATV trail when it veered right to avoid the mountain summit and started climbing once again. Towns has a long flat summit area bordered to the west by cliffs which is why we decided to climb to the summit from the north. So we were a little surprised when we encountered north-facing cliffs and ledge. We sucked it up and powered up and through them, but soon encountered more obstacles that were also not depicted on our maps.

We encountered a series of east-to-west ridges as we hiked toward the summit. Each one had a very steep drop-off on its north side which we had to “finesse” after hiking up them. We were snowshoeing in pretty deep powder and this required careful footwork, if you can imagine that wearing snowshoes, picking our way down the steep sides.

We reached the first false summit and could see the main summit through the trees. Rather than head straight for it, Ken wanted to stay high and avoid hiking down through the col in between. We tried to stay high, but vegetation got in the way. But we finally worked our way through it, with much scraping against spruce trees, to the summit canister. Climbing Towns has taken a lot more effort than we’d expected

To reach Mt Misery, we decided to try and find a route down Town’s east side, avoiding its steep ledges, rather than backtracking the way we’d come up. Ken found a very steep logging road that descended Towns and avoided its cliffs. We hiked down it to Carpenter Brook and then toward the col in between Mt Misery’s two summits (also called bumps).

While we aimed for the col between Misery’s two summits, we ended up on the sub-peak and not the main summit. This was an easy course correction though and we soon summited the main peak.

From the summit, we just bushwhacked downhill, crossing numerous logging roads until we reached Carpenter Brook again. From there, we quickly found our tracks and followed them back to the cars.

On hindsight, we probably could have climbed both of these peaks with less of an effort if we’d done Misery first and then Towns. But the logical route is not always the most efficient!