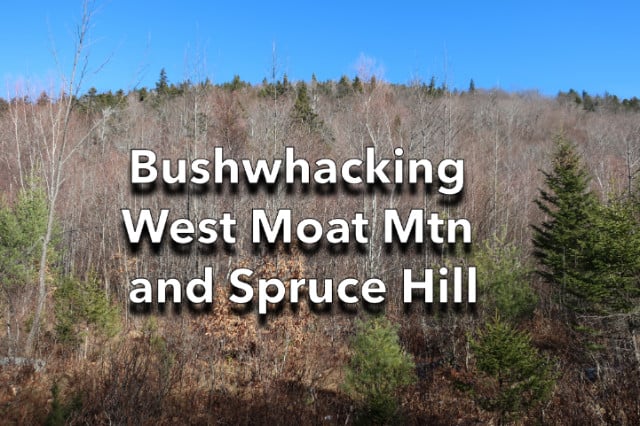 West Moat Mountain and Spruce Hill are two peaks on the NH500 Highest List. They’re located near Conway, NH near the Boulder Loop Trail. Both are trailless peaks, so you have to bushwhack them. West Moat is located in a wild section of the National Forest that is seldom hiked because there are no established trails in it or roads. It’s also referred to as Southwest Moat. In addition to solitude, the area has impressive views of the Sandwich Range ridgeline stretching from Mt Chocorua to the Tripyramids, Bear Mountain, and Table Mountain from a perspective that few have witnessed.

I hiked this route with my buddy Ken who is usually up for the crazy adventures I dream up. He’s a very experienced off-trail hiker, climber, and mountaineering guide and we’ve done many gnarly bushwhacks together in the past.

When planning out this hike, I decided the best route was to follow fire roads up to the west flank of West Moat. Ken concurred. The mountain has steep eastern and southern cliffs which would be challenging to climb and coming in from the west provided the gentlest gradient. From West Moat, we could backtrack down the west side, contour around its base, and cross the saddle to Spruce Hill. From Spruce, we’d navigate in between two cliffy areas to the Ledge Trail and then descend back the Boulder Loop Trail to the Covered Bridge parking lot and our cars.  That’s exactly the route we took.

The Impact of Logging on Bushwhacking

We started off by following two fire roads, FR #28 and FR #28A. Most of these roads are actually logging roads created during timber harvests to extract trees. The White Mountain National Forest is a crop, after all, managed by the US Department of Agriculture. This of course raises interesting challenges from a navigation perspective because it alters the landscape in significant ways and it’s important that you be able to adapt to unexpected conditions on the fly.

While the logging roads we followed are shown on the map, many aren’t. There are different classes of logging roads, some that are capable of supporting semi-truck traffic and others that can only be used by skidders, which are huge tractors with giant knobby wheels for dragging trees out of the forest. Before logging trucks and skidders, there were logging railroads and horse teams that dragged the freshly cut trees out of the woods, usually in winter when the ice and snow made the work easier.

In addition to logging roads, there are logging cuts, which are large fields slash or young replanted trees that are created when a section of the forest is cleared for wood. Contrary to what you might think, logging benefits much of the local wildlife by creating new plant growth that benefits deer and moose and all the animals that depend on them to keep the ecosystem healthy.

We parked at the Boulder Loop Trailhead off Passaconaway Road and headed up FR #28 which runs beside the Swift River, passing a blazed XC trail on the right that entered the woods. We continued along the road till we met FR #28A and headed up until we came across a skidder road that angled off in the direction we wanted to take. It led to a big field of immature birch and slash from a logging cut, which we skirted around rather than try to walk through it.

This brought us due west of West Moat, which we proceeded to climb. We climbed parallel to a stream and encountered one minor spruce band before reaching a line of cliffs leading up to the summit. Rather than climbing them, we stayed below where there were fewer blowdowns and used them as a handrail to just below the summit. This was a little surprising because we’d expected to find a lot of debris below the cliffs, but they were notably absent.

The gradient moderated as we neared the top and we were able to skirt around the cliffs to the summit area, where Ken quickly found the jar containing the logbook. There were surprisingly few names in the jar, but it contained the usual cast of notorious characters. The last hikers to visit the summit had been there 9 months earlier!

We signed in and had a snack, before retracing our steps back down to 1800′. From here we contoured around the base of West Moat, staying at 1800′, to avoid the gnarly field of slash below us. This brought us to the edge of the saddle joining Spruce Hill. The saddle was full of more mature birch, but of the “pencil” variety. It was also a wet saddle and quite boggy. We were wearing our high waterproof winter boots, so we just plowed through to the other side.

Spruce is a much “flatter” peak than West Moat, so it took us a while to find the high point. The contour intervals of topographic maps are usually too large to reflect the fine gradations in elevation. There was also no logbook jar that we could find.

From the summit, we shot a bearing between two cliff bands that guard the highpoint of the Boulder Loop  Trail and bushwhacked to it. I’m a big fan of Slope Angle shading which is available in Caltopo and GaiaGPS. It makes it much easier to recognize steep areas on topographic maps and avoid impassably steep cliffs and gradients. When we got to the Boulder Loop Trail, we hiked down the west side back to our cars.

As a rule of thumb, I don’t pay much attention if any to other people’s bushwhack trip reports when planning a trip because I like to plan my own routes. The point of bushwhacking for me is exercising my off-trail navigation skills. Still, these trip reports made interesting reading after the fact.

Philip Werner has hiked and backpacked over 7500 miles in the United States and the UK and written over 2500 articles as the founder of SectionHiker.com, noted for its backpacking gear reviews and hiking FAQs. A devotee of New Hampshire and Maine hiking and backpacking, Philip is the 36th person to hike all 650 of the hiking trails in the White Mountain Guide, a distance of approximately 2500 miles, completing a second round in 2021. Philip is the author of Backpacking the White Mountain 4000 Footers, a free online guidebook of the best backpacking trips in the White Mountains in New Hampshire and Maine. He lives in New Hampshire.
Previous How to Use Crampons
Next Bushwhacking Dinsmore Mountain

REI.COM: Winter sale and clearance. Save 30% off clothing plus many other specials.