Can You Cook Food in a Jetboil? 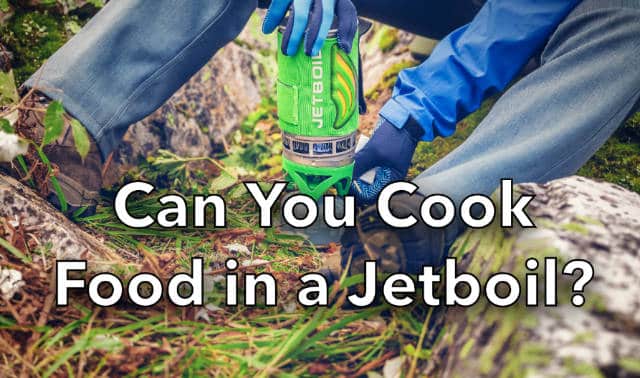 Most backpackers who buy Jetboil stoves, buy the Jetboil Flash or Jetboil Zip models without realizing that they’re designed for boiling water to rehydrate freeze-dried or dehydrated backpacking meals and not simmering food slowly on a low flame, which is what people think of when it comes to “cooking” food. While Jetboil does make stoves that you can simmer with (see below), you can still cook some basic meals with a Jetboil Flash or a Jetboil Zip using the methods we describe below.

The problem with the Jetboil Flash and the Jetboil Zip is that it’s very difficult to turn their flames down low without having them flicker out completely. They also have small diameter pots with small cooking surface areas that make it hard to heat the food higher up in the pot because it’s farther away from the burner head and therefore lower temperature. That said, you can still cook food in them if you are very careful and you stick to very watery and soupy meals like Ramen noodles or small pasta.

The chief danger in trying to cook in a Jetboil Flash or the Jetboil Zip is a boilover where you get burned from getting boiling water on your hands. For example, if you’re cooking noodles, the noodles will float to the top of the pot, while the water below continues to boil. The top floating noodles will form a kind of “lid” capping the soupy mixture and can easily boil over if the water below gets too hot and needs to blow off some steam.

You can also get burned if your Jetboil tips over and the contents of your dinner spill onto you. The best way to prevent this is to use the orange fold-away pot stand that comes with a Jetboil and locks onto your fuel canister. It’s worth carrying the extra few grams that it weighs with any stove system, to prevent tip-overs, even when you’re not using a Jetboil Flash or Jetboil Zip.

If you do try to make a noodle dish in a Jetboil Flash or Jetboil Zip, I’d start by only filling the pot half full of water to help prevent a boil-over. When cooking, use a long-handled spoon to mix the mixture so that it gets heated equally throughout. Gentle stirring will help release some of the pressure building up under the virtual lid made by your noodles.

There’s also another way to safely cook a noodle dish in a Jetboil Flash or Jetboil Zip which I recommend you try. Simply cover your noodles with water, bring the water to a boil, give your noodles a stir, and then turn off the heat (keeping the pot covered.) Full stop. Your pasta will cook in the same amount of time and to the same texture as it would have if it cooked at a boil. See Forget Boiling: How to Cook Pasta and Save Stove Fuel for more details.