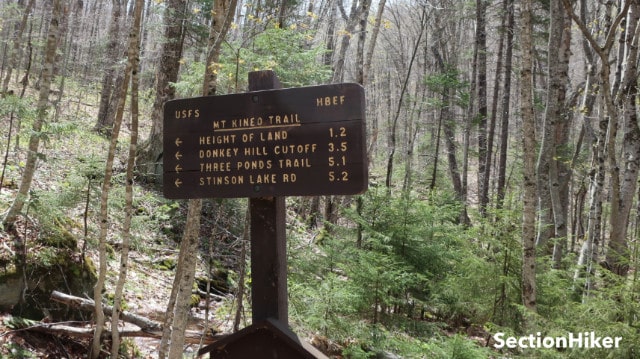 East Kineo is a mountain in a primitive area of the White Mountains called the Hubbard Experimental Forest. Run by the US Forest Service it’s home to one of the longest-running and most comprehensive ecosystem studies in the world,  hosting long-term studies of air, water, soils, plants, and animals. Situated in the bowl-shaped Hubbard Brook Valley and ringed by mountains, it was one of the first sites to comprehensively document the effect of acid rain on the environment.

While there are some hiking trails, snowmobile routes, and forest service roads in the area, it’s visited far less than the rest of the White Mountain National Forest. Being a research forest, it’s not uncommon to come across experiments, trail cameras, and data collection sites in the woods and clearings of the forest. Besides waving at the cameras, which are used to monitor the movement of larger animals, it’s best to give the experiments and data collection sites a wide berth and leave them undisturbed.

This was my second attempt to climb East Kineo, having failed the first time, and I was determined to reach the summit. On my first try, I’d set out to reach the summit with a group of friends who had even less off-trail hiking experience than me. While we had a GPS with us, I’m embarrassed to say that we didn’t understand how to use it. This was many years ago, before smartphone GPS apps had become widely available and I’d taken the time to master how to use one in conjunction with a map and compass. We’d retreated in defeat, willing to return at some future date. 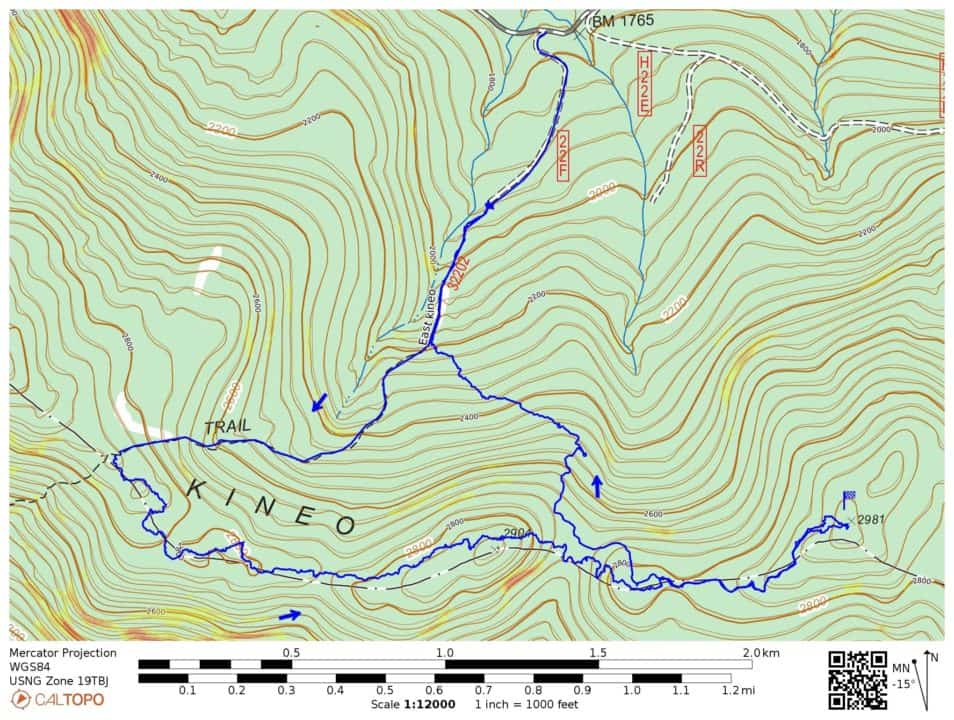 This time around, I decided to approach the peak by climbing up to height-of-land on the Mt Kineo Trail before working my way out along the ridge to East Kineo. Height-of-land is a navigational term used widely in the northeast to describe the elevation, usually a ridgeline, that divides two watersheds, where the direction water flows downhill changes direction. Height of land was used by native Americans to delineate land boundaries and is still widely used by surveyors and landowners for the same purpose. When hiking off-trail it’s not unusual to come across painted trees, plastic flagging, or stone walls that follow property boundaries that trace the height of land. In fact, it’s a useful navigational aid.

This required a 1000 foot ascent which I reckoned would be easier to climb on a trail than off-trail through the woods. This being mid-May the forest understory was beginning to bloom and in particular a vine-like plant called hobblebush which is the anathema of all off-trail hikers. Hobblebush, is a sinuous vine-like shrub that grows head high and grabs at your legs if you try to walk through it, which you usually have to do because it blankets the forest floor. I like to call it the devil’s weed. Incidentally, its broad-shaped leaves make a good substitute for toilet paper.

I set off and climbed the Mt Kineo Trail which was surprisingly dry since it’s a notoriously wet and muddy trail. When I reached the top of the ridge, I vectored east and started making my way along the ridge. This turned out to be a bit more challenging than expected because the ridgeline is very “bumpy” with lots of minor ups and downs divided by alpine bogs and mini-cols. Rather than stick to the ridgeline, which was littered with blowdowns, I stayed just below it in order to use it as a handrail, but had to check my GPS fairly frequently to make sure I was still on course and not falling off and down some gully off-course. If you look at my GPS track above, you can see that it has a lot of wiggles, as I avoided obstacles along the way. It was slow going.

Things opened up a bit when I reach a big col before I started climbing East Kineo proper and the false summit to its west. I encountered a wall of cliffs but found a clever way up them before the final ascent to the summit. Much to my surprise, I came across a wide logging road blazed with yellow blazes. Logging roads are pretty common in the Whites and we use them for off-trail hiking when they head in the direction we want. These aren’t roads in any sense, but remnants of the paths used to drag logs out of the forest that have grown over with vegetation over time. They’re usually easier to follow than hiking through untouched forest because they’re fairly free of blow-downs, but not always.

I checked my compass and found that the yellow-blazed road ran in the direction I wanted to go, so I decided to follow it. I knew it wasn’t a hiking trail because I’ve hiked all the official trails in the White Mountain National Forest. Literally. Still, I wondered whether it might be a new trail that would be listed in the next edition of the White Mountain Guide since it was blazed in yellow which is a common blaze color in the Whites. This suspicion was reinforced when I came across a set of new-looking bog bridges.

I continued following the road which paralleled the height of land but was set a little apart from it. When I got near to the East Kineo summit, I reentered the woods and looked for the highest point of the forest. This required inspecting several outcroppings that might be the summit until I found the location of the summit canister and its logbook.

East Kineo is on the New Hampshire 200 Highest peakbagging list and has a canister at the summit. This is a PVC pipe containing a logbook where people can note their visit and leave a short message for others to read. It’s like geocaching but for summits.

Reading through the logbook, I saw the names of many people I know or know by reputation. One of these, “Lady B and the Italian” has left a note saying they’d climbed the peak on the yellow-blazed trail I’d just followed. I don’t know where they’d started, but I decided to retrace their route if it ran in the direction I wanted to get back to my car.

I bushwhacked back to the yellow-blazed trail and retraced my route, bypassing some of the difficult sections of my earlier ascent, which was a relief, to be honest. I didn’t know how I’d get down some of the cliffy sections I’d climbed earlier in the day. The logging road started to drop elevation and there were a few places where it was hard to follow, but I managed to stay on it until it entered a clearing at about 2500′, the site of a Hubbard monitoring and data collection station.

The trail continued east from here, but I needed to get back to my car which required a westerly descent. I reentered the woods and bushwacked back toward the lower section of the Mt Kineo Trail through mostly open woods, although the hobblebush was blooming as I’d suspected. I suspect that that logging road drops down to one of the gated trails off FR #H22E, but I’ll leave that as an exercise for the reader. It just goes to show that you never know what you’re going to run into when you step off-trail.