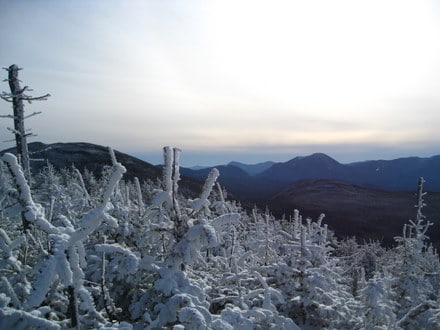 Yesterday, naturegirl and I drove up to the Whites to climb Mt Tom (4,051 ft), a four thousand footer, near the entrance to Crawford Notch. We wanted to beat the blizzard that is raging now across southern New England and get a climb in before civilization comes to a halt and the snow plows take over.

I picked her up at our normal meeting spot at 5:30 am and we sped north. Time flies when I'm driving north with her.

When we got to the trail head at 8:50 am, the sky was an azure blue with a hint of whispy clouds and some low lying fog at the base of Mt Washington. The temperature was very cold, registering 17 degrees below zero. Thankfully, there was little wind and we would be below treeline until the summit.

We had anticipated the cold weather and were both wearing extra layers. I was testing out a pair of Montane full zip pants made out of eVent and wearing capilene 3 long underwear on top and bottom for a bit more insulation. Naturegirl was also bundled up with an additional windproof fleece and hard shell pants. We were fully kitted out for winter hiking above treeline with crampons, snow shoes, balaclavas, face masks, etc. and wore specialized winter boots.

The trail had been broken out by snow shoes but was still soft. I started by leading on the first trail segment, a 1.6 mile section of the Avalon Trail. We made good time and started to strip off layers and vent within 15 minutes. It was cold alright, but we heated up quick with our heavy packs.

After an hour, we came to a junction with the A-Z trail and had a refueling stop. From here it would be another 1.0 mile to the Mt Top Spur Trail and the summit. The entire front northern side of Mt Tom was ablaze in sunlight and I couldn't wait to get out of the shade and bask in it.

This next mile of trail proved very steep and our pace really slowed down. The trail was still broken out, but narrow, and I kept post holing when I got to close to the downhill side. I thought about whipping out my ice axe, but the snow was so soft that I was able to kick steps all the way up and balance with my poles. It was hard work and we stopped every 5 to 10 minutes for short breathers. Climbing this mile took us 80 minutes. Turns out it was close to 1,000 feet of ascent.

We came to the Mt Tom Spur Trail junction at the base of the summit and had a big snack and some water. It was really beautiful in the snow blanketed woods and there were lots of bunny rabbit and moose tracks in the surrounding trees. Naturegirl had seen one bird on the way up, but we were alone and hadn't seen anyone else on the trail all day. 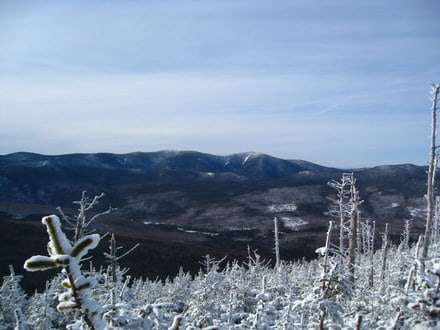 The final half mile up to the summit was pretty easy and we made good time, although I paused twice because I thought I heard a big animal warning us off in the surrounding forest. Naturegirl has had some unpleasant moose encounters and was a bit hesitant to proceed. I scanned the trail ahead for moose tracks, but didn't see any and figured that we'd be ok, so we continued through the krumholz.

We came to a false summit with an obstructed view north to Mt. Washington. The sky was so clear we could see the weather towers on the summit. We continued 60 yards further to the true summit which had great views of the Franconia Ridge and the entire Pemigewasset Wilderness.

There was a little wind at the summit so we didn't linger and turned around to descend, stopping again 0.5 miles later at the junction of the Mt Tom Spur trail and the A-Z Trail. Naturegirl broke out some organic dark chocolate and I fueled up for the descent with more Tarmari roasted almonds and hi-cal, honey roasted sesame sticks. My insulated water bottles were starting to freeze up in the cold, but I drank as much of the freezing water as I could stand because I was worried about dehydration.

Naturegirl wanted to wear her crampons down the steep part of the descent, but I convinced her that we didn't need them and could bare boot it down. I was concerned about the steepness of the grade and her lack of an ice axe to self-arrest if she fell. Un-arrested falling and crampons are a good way to break your legs. 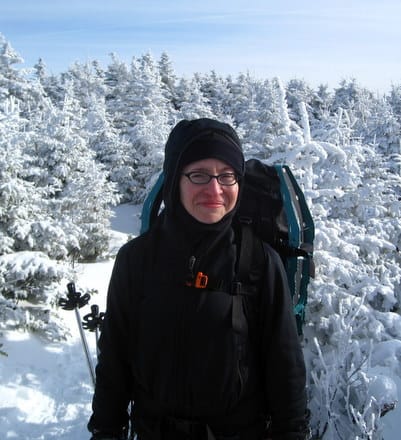 Instead we bare booted it back down, retracing my steps from the climb up. I just arched my feet up a bit and dug in with my heels on each step, and we flew down the mountain, making the descent in a little more than an hour.

This was a harder climb than I anticipated and I think that was mostly due to the frigid weather. It's good that we were on a lower summit and in the trees most of the way up. We probably would have called it a day if our destination had been one of the higher summits with extensive above treeline exposure.