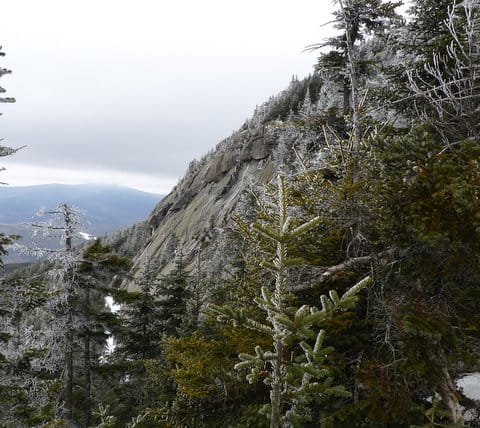 Chris and I headed up to the White Mountains in New Hampshire on Sunday to bag Mt Whiteface (4,020 ft), another 4,000 footer in the Sandwich Range. While winter is officially over for peakbaggers trying to finish their winter 48, winter itself has not yet departed the Whites, at least not completely. There’s still plenty of high consequence hiking and climbing for those who seek it.

Such was the case with Mt. Whiteface which still had plenty of ice on its ledgey false summits and peak. While we were able to bareboot the approach hike to about 2,000 ft, from there on, we switched over to step-in crampons to climb the steep Blueberry Ledge Trail which ascends 1,500 ft in it’s last mile.

Recent storms have done extensive damage to the forest and we were forced to bushwhack around large blow downs that blocked the trail. We saw dozens of big trees down during the day that will have to be cut up and cleared by the Wonalancet Department of Conservation. They clearly do a fine job with trail maintenance in the area.

We’re at the part of spring that I dislike in the Whites, where we have different seasons at different altitudes. For example, at the bottom of our ascent we were hiking over 3 season ground cover – leaves and bare rock. Then we hit a zone of ledge covered ice, followed by solid ice mixed in with very hard corn snow. This was reversed on the descent with the added thrill of an open stream crossing and mud, mud, mud.

Once we got past the blow downs, we came to high consequence ledges covered in ice. These weren’t technically challenging to climb for me, but Naturegirl is a lot shorter than I am and she had a hard time taking the same route. When I say high consequence though, I mean it. Whiteface has sheer cliffs and smooth ledges near the summit, and it wouldn’t take much momentum on a slide to launch into a rag doll drop to the valley below. 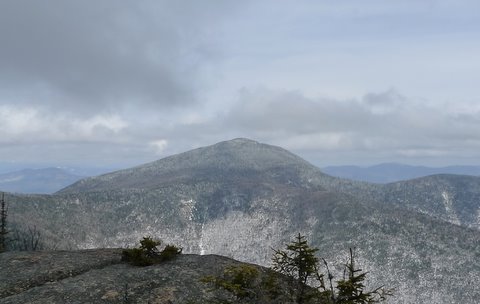 By the time we made it to the top of Whiteface, the fog that had shrouded the mountain when we started our hike had lifted, yielding fantastic views of neighboring Mt Passconaway and a wooded area of virgin forest known as The Bowl which lies in the valley between the two peaks.

At the summit, I broke out the duct tape. Hiking in plastic boots over 3 season terrain at the bottom of the mountain had generated a lot of sweat in my socks, contributing to the worst blisters that I’ve had in a very long time. I torn off a couple of strips and covered them up to reduce the friction between my skin and the liner for the rest of our hike. The time has come to put away the plastic boots and step-in crampons for the season and switch over to leather boots and strap-on crampons, when extra traction is needed.

From the Whiteface summit, it is possible to follow the Rollins Trail over a 2.3 saddle connecting Whiteface and Passconaway. I wanted to try to bag Passconaway as well and since we still had 6:45 hours of daylight left, we decided to cross the saddle and assess the situation. If we decided to summit, we’d need a conservative two hours up and down and then 2 more to hike out the remaining 3.4 miles down the Dicey Mills Trail to the trail head and my car.

We set out down the Rollins Trail which is well blazed but had not been hiked recently. Luckily snow conditions were such that we could make good speed despite walking on an unbroken trail. The saddle had suffered freezing rain, and had repeatedly thawed and refrozen in the past few weeks. This produced a hard crust on the snow which prevented postholing, but required crampons to traverse. 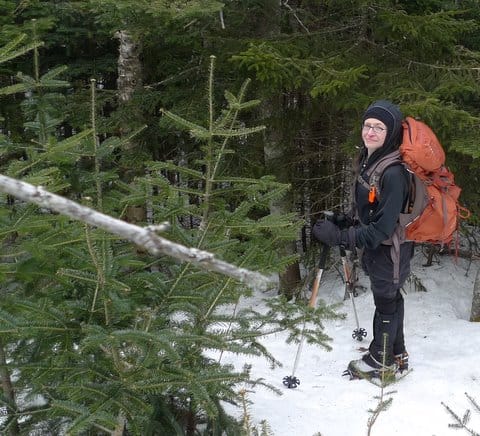 The Rollins Trail runs along the top and western side of the saddle. Although we had some tree cover, the wind was gusting to 40 miles an hour and we had to bundle up to avoid frost nip or worse. We also had to contend with a lot of low hanging tree branches which kept snagging my snowshoes and ice axe. However, it wasn’t that the branches were low, but that the snow level was high. We were walking between tree tops on over deep snow base.

At 2:15 pm, we made it to the junction of the Rollins Trail and Dicey Mills, but by this point Chris and I were feeling pretty of gas. When I start shredding my gaiters or pants with crampons points, it’s a clear sign that I’m starting to bonk. Although we were only a mile from the Passconaway summit, we decided to call it a day and hike out. Except for a stream crossing and mud, this was an uneventful exit hike down and we were back at the car by 4:30 pm.

If I didn’t convey it properly above, Mt Whiteface is a magnificent and challenging hike despite being one of the lower 4,000 footers. I’ll be back here later in the summer.