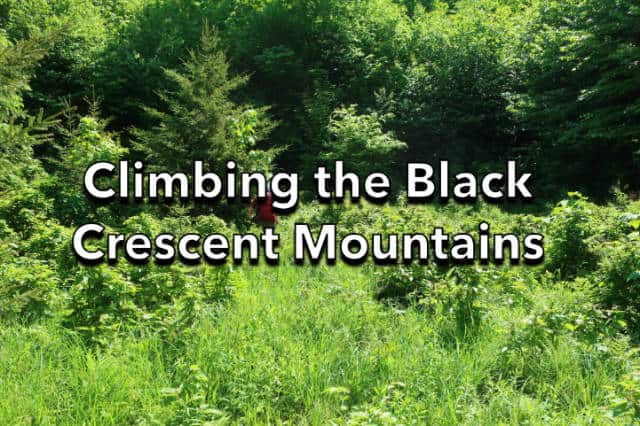 I was joined on this hike by my friend Ken who’s often willing to join me on my mad-cap adventures. He works as a mountain guide in North Conway and teaches off-trail navigation. We’ve been hiking together for years and have a good give and take rapport which makes it easy to reason through navigation problems in real-time. You can’t really prepare that much for a bushwhack because the important details about surface conditions are too fine-grained to show up on topographic maps.

We started this hike at the Landing Camp Trail Trailhead on Bog Damn Rd near the Berlin Fish Hatchery, crossed to the side opposite the road, and started climbing through open forest. We soon came across an old logging road and then a sequence of games trails made by moose, before hitting a band of hobblebush and raspberry at 2500′. This stuff is terrible to hike through because the vinous hobblebush stems grab at your feet and the prickly raspberry bushes scratch your skin.

I found a seam of low-hanging trees, devoid of these terrible plants, and powered through it, coming out on a north-to-south logging road at about 2700′. These logging roads aren’t active and they’re not really roads. They’re pathways in the woods that were once used by logging tractors (called skidders) to drag cut trees out of the forest. The dragging process creates a discernable pathway through the woods that is largely devoid of vegetation and is easier to follow than hiking through dense woods. They’re not mapped and no one keeps track of where they are, but if you can find one headed in your direction, you can follow them and save some energy. The trick is knowing when to leave them when they stop going in the direction you want to travel.

We suspected that this north-south logging road might loop around to the summit of Black Crescent North so we followed it to another logging road that angled more sharply up the peak. It soon petered out but it got to open woods, which we climbed to the summit. One down.

We signed the logbook, ate some food, and hydrated. Ken inspected his hydration system which had a slow leak and had soaked his pants. While worrying, the cold water did help keep him cooler in the 90+ degree heat. But the real suffering would come a bit later in the day.

We followed a game trail from Black Crescent North towards Black Crescent, descending through a messy col, and then into open woods with a fern understory. Ken spotted a moose antler shed on the ground, but it was too chewed up by other animals to bother collecting. From there, we followed a gentle gradient to the summit, crossing close to the WMNF boundary, painted on trees with red splotches of paint. Two down. Little did we realize what lay ahead.

We had to do a much longer off-trail leg to Black Crescent South and this is where things got significantly more difficult on this hike. The day had grown hotter, reaching the low 90’s with high humidity. The vegetation also got much denser, even at elevation, and we had to push through large stretches of hobblebush and blowdowns.

The bug pressure had also become horrendous. This was less of a problem for me because I always cover-up completely on off-trail hikes, but Ken insisted on hiking without a head-net or long sleeve shirt. He must have sprayed himself down with OFF! a half dozen times on our hike, with increasingly marginal effect because he sweated it off so quickly.

The terrain also became harder to navigate due to an increase in cliff-bands that we had to hike around as well as cols between peaks and hills (technically called “bumps”) in the terrain. The navigation app we both use on our phones was also giving us different bearings and ones that didn’t entirely make sense. We had to ignore it for a while and rely on map, compass, and our watch altimeters to get through some confusing navigation decisions. There is a real danger to becoming too reliant on GPS nav apps when hiking off-trail because their zooming capabilities hide map details by design. More on this in subsequent articles. It’s a subtle issue that has far-reaching consequences.

We set our bearings toward Black Crescent South and headed toward it. Ken proposed contouring around the two intervening bumps at 2800′, descending gradually to that elevation as needed. This would avoid having to climb the bumps. It’s easier said than done because people have a tendency to hike down into terrain traps when side-hilling rather than truly contouring at a fixed elevation. I compensate for this by hiking uphill slightly when contouring to offset this tendency. You also can’t follow a bearing when contouring, because it changes constantly as you walk around the land feature.

We were almost around the first bump when Ken noticed we were headed for a band of cliffs. The slope shading layers available in most GPS navigation apps are very helpful in this regard. We dropped below it and hiked through the next hobble-bushed chocked col. The stuff was over our head by this point.

I took the lead and sidehilled around another bump to the col in front of Black Crescent South. We were both getting tired at this point. The hobble bush was particularly bad in this col reaching above head height. It was so high, I had to yell “Marco” as in “Marco Polo” so that Ken could find me in the sea of leaves.

We got to the other side of the col and started climbing to the Black Crescent South summit. This was easy at first but then we hit a cliff band and dense blowdowns. I was bonking and stopped to eat a sandwich and drink another liter of water. The blowdowns got thicker and I had to crawl under them before clambering up the cliffs. Ken found the canister in a small clearing at the summit just as I popped in after him. We rested a bit and then pushed off headed out and back to the road.

We descended a steep cliff, butt sliding down the final section where a moose had obviously preceded us (in sliding down the same slope). We suddenly came to another vegetated logging road and burst out laughing. If we’d come up this way instead of hiking from north to south, it would have been a much easier hike. That road soon petered out, but it was a mild descent back to Bog Dam Road and the cooler in my car with ice-cold PBRs.

Philip Werner has hiked and backpacked over 7500 miles in the United States and the UK and written over 2500 articles as the founder of SectionHiker.com, noted for its backpacking gear reviews and hiking FAQs. A devotee of New Hampshire and Maine hiking and backpacking, Philip is the 36th person to hike all 650 of the hiking trails in the White Mountain Guide, a distance of approximately 2500 miles, completing a second round in 2021. Philip is the author of Backpacking the White Mountain 4000 Footers, a free online guidebook of the best backpacking trips in the White Mountains in New Hampshire and Maine. He lives in New Hampshire.
Previous Mountainsmith Mountain Shelter LT Review
Next Salomon Quest 4D 3 GTX Hiking Boots Review