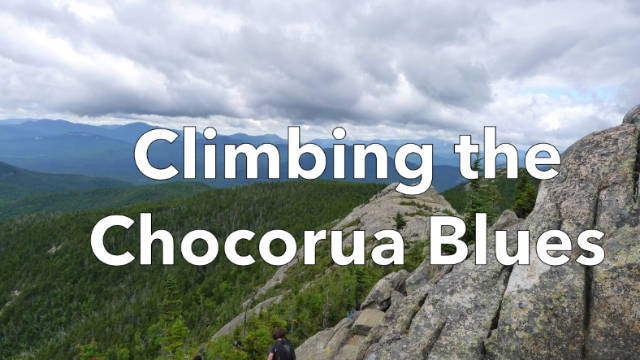 Mt Chocorua has a number of sub-peaks including Blue Mountain (2540′), Blue Northeast (2370′), and Blue Northwest (2380′). I’ve been thinking about climbing them since last Autumn and now that the snow has melted off most of the peaks under 3,000 feet in the White Mountains, the time seemed right to give it a go. Bug season hadn’t quite kicked in so there was a narrow window of time where I could climb them without body armor.

There are two ways you can approach this set of three peaks. One is to climb up the Carter Ledge Trail to Middle Sister Mountain, before bushwhacking a short distance to Blue Mountain and its siblings. That was my original plan, but being an originalist or a contrarian if you prefer, I decided to climb them entirely off-trail. What can I say? I have a non-conformist streak a mile wide. Most people who’ve climbed these three mountains have climbed up that hiking trail. I wanted to experience something a little different and more adventuresome. I got my wish.

I decided to begin this hike on a gated fire road, FR #508, which leaves from the Kancamagus Highway, a two-lane road that bisects the Pemigewasset Wilderness. “The Kanc” is the only way to travel east to west in the Whites without driving all the way around the National Forest.

I hiked up FR #508 passing through an open area, which was probably once a loading area for logging trucks (called a log landing), bearing right at the fork after the clearing. I’d considered hiking up the left-hand side of the road to the end but decided I’d rather climb the ridge head-on, perpendicular to the contour lines, which I’ve always found easier going when hiking off-trail.

I entered the woods and climbed through a jumble of boulders and dead trees before entering a flattish area, which soon became boggy and moss-covered. You never know what ground conditions you’re likely to encounter on a bushwhack, which is half the fun…and challenge.

While it’s true that off-trail hiking can be very strenuous, you’d be surprised by the amount of thinking you have to do when you’re not following a trail. You have to weave and dodge downed trees, plow through ankle-grabbing vegetation, avoid brambles, bogs, and face scraping branches, circle boulders, and power through unexpected climbs and drops to make any forward progress.

That bog and mossy section ended abruptly at about 1500′ when the forest opened up. That’s how it looked the first week of May, at least. I suspect it looks much different later in the spring and summer once the leaves come out. The north side of the ridge was pencil woods and new growth, probably due to logging, so I stuck to the south side and started hiking up the ridge. The ridge was hard to discern being wide and fairly flat, so I relied on my compass to go straight and climbed gradually uphill through mostly open woods.

I came across an old skidder road at 1700′ and decided to follow it since it looked like it was headed in my direction. These roads are created by enormous tractor creatures that drag felled trees down to log landings where they can be loaded onto logging trucks and carted off to the mill. They’re not really roads, but road-like paths through the woods that haven’t grown back in. They’re easier to travel on through the woods, so you follow them when you can to save energy. You do the same thing with game trails when you cross them. You never know when you’re going to stumble onto one.

I followed the skidder road to 2000′ where I encounter spruce on the climb to the summit. The woods got considerably thicker at 2300′, which means it’s tearing at your face and clothes, and there were a few false summits I had to check out before finding the Blue Northwest canister. This canister was a glass jar covered with blaze orange tape that contained a logbook, going back some 10 years, with the names of the people who’d found the canister and left an entry. It’s not a very long list but I know or know of most of the ‘characters’ on it. The usual suspects as they say.

After leaving my own message, I considered my route to Blue Northeast, the next peak I wanted to climb, before climbing the farthest away, Blue Mountain. There’s a flattish triangular area, called a ‘col’ in between all three peaks that you need to climb down to before you can climb to the next mountain summit. It’s not a big descent, just a few hundred feet, but it is off-trail over varied terrain. Very varied.

I dropped some elevation off the Blue Northwest to the southeast, angling through ledges down to the col. Only the col was a very wet bog with a small stream running through it. I crossed the stream and took a bearing on the Blue Northeast summit. Rather than hiking through the bog, I started looping around the northeast peak on higher ground looking for a way across the wet area where I could keep my feet dry.

I found an elevated area and hiked across it. From there it was an open ridge climb with lots of false summits to the canister. The canister is at the back of a curious “throne” of conglomerate and easy to walk past, but I guess the blaze orange tape marking it caught my eye.

The canisters, which range from glass jam jars to PVC pipes, and are usually located at the summit of a peak, although some peaks are flattish so you have to wander across them looking for the highest point. I carry a GPS with the coordinates of the mountain high points, but they’re not always accurate or the GPS is “off” within its envelope of acceptable error, so you often need to search for the canister when you get in the vicinity of the summit area. Some peaks also don’t have canisters at all, which you usually don’t know in advance.

I signed in, ate a sandwich, and then backtracked down Blue Northeast toward Blue Mountain. I was careful to cross over the dry area where I’d crossed the bog previously and started climbing up Blue’s flank. The summit of Blue Mountain is set back a ways from the col and has a ring of cliffs surrounding the summit area.

I found an easy passage between the cliffs and started investigating the highpoints in the summit area looking for the canister. I must have checked out four or five piles of boulders and blowdowns when I stumbled across the canister jar. This one was not covered in blaze orange tape, so I’m lucky I saw it.

I signed in and then descended Blue following the line I’d followed up it. I then climbed back up Blue Northwest, reversing the route I’d descended earlier, and passing the canister a second time, before hiking back down towards the Kanc.

I reacquired the skidder road I’d climbed earlier and followed it down to 1600′ when it turned west and diverged from my desired direction. Rather than hike back through the boggy section I’d passed through at the beginning of the hike, I decided to angle northeast to reach the section of FR #508 I’d bypassed earlier.

The descent to FR #508 proved to be steeper and rockier than I expected. The slope was covered with a thick layer of dried leaves that were as slippery as ice to hike over. They also covered up gaps in between the slope’s boulders that could easily trap a foot and lead to an ankle injury. It was slow going, but I made it down to #508 eventually.

Or so I thought! It would be generous to call the upper section of #508 a road. It is heavily grown in and resembles a game trail more than a Forest Service Rd. It was kind of amusing, really. I’d bushwhacked down to the road for a fast exit, only to find myself back in a bushwhack situation. Nevertheless, the going was somewhat easier and I soon found myself back at my car. In sum, I’d climbed four off-trail peaks, one twice, and covered nine off-trail miles in six hours. I went home for a well-deserved shower (to wash the dried blood from my legs) and to drink a cold blue ribbon.