Do You Need a Tent to Hike the Appalachian Trail? 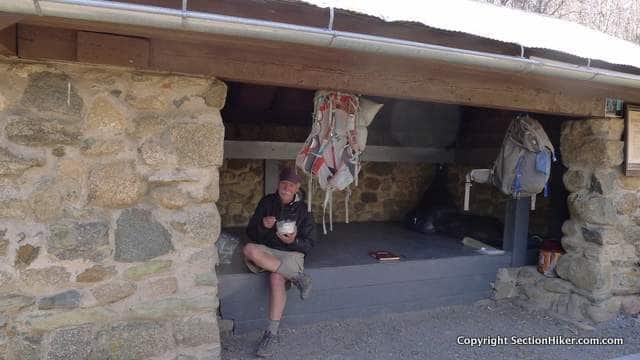 When hiking the Appalachian Trail, you always want to bring some kind of camping shelter, be it a tent, floorless tarp, or hammock, because there’s a very real chance that the shelter will be full when you arrive. Shelter occupancy is first come, first serve.

Next, there are plenty of shelters on the Appalachian Trail that you’re not going to want to sleep in. Some are absolutely disgusting, dirty, filthy, falling down structures that you’ll want to avoid. Some are infested with spiders and snakes, so ditto.

You also can’t guarantee that you’re going to want to sleep in the same room with the people who are already in the shelter or arrive after you. I’ve arrived at plenty of AT shelters that are already occupied by Aqualung types, and while some of them really are harmless hikers, it’s nice to be able to camp someplace else. I’ve certainly packed up after a few hellos and a snack and hiked down the trail a few miles to a less exciting campsite.

Perhaps more irritating are the shelters that fill up with bachelor parties on weekends – I had this happen on my Shenandoah section hike last year – where people are blaring music and drinking Kool-aid shots while you’re trying to sleep. If you want to avoid the party crowd, chain-smoking cigarette smokers, dope smokers, people who want to drink beer all night and get f*cked up, people who insist on building campfires in front of the shelter and staying up late, hikers who snore loudly, or emit horrendous gagging farts all night, carrying your own shelter is well worth the added pack weight.

There are also shelters that you’re going to want to plain avoid because they’re located near roads or trailheads. These tend to be teenager and towny party magnets and are heavily vandalized despite the noble efforts of local trail and shelter maintainers. I give shelters like this a wide berth. You can never be sure who will arrive after dark.

But the biggest and most important reason to bring a tent, tarp, or hammock on the Appalachian Trail is hypothermia. If it’s pissing down rain and you start shivering uncontrollably because you are hypothermic, you want to stop, pitch your shelter where you are, and crawl into a sleeping bag/quilt to rewarm yourself. If this happens and you haven’t packed a shelter, SAR will probably make you pay for your own rescue, if they even arrive in time to save your life.

Of course, some of my best experiences on the Appalachian Trail have been in shelters with other hikers I met along the way, but it’s nice to have the option to sleep alone sometimes too.

Philip Werner has hiked and backpacked over 7500 miles in the United States and the UK and written over 2500 articles as the founder of SectionHiker.com, noted for its backpacking gear reviews and hiking FAQs. A devotee of New Hampshire and Maine hiking and backpacking, Philip is the 36th person to hike all 650 of the hiking trails in the White Mountain Guide, a distance of approximately 2500 miles, completing a second round in 2021. Philip is the author of Backpacking the White Mountain 4000 Footers, a free online guidebook of the best backpacking trips in the White Mountains in New Hampshire and Maine. He lives in New Hampshire.
Previous Garmin inReach Mini 2-Way GPS Satellite Communicator Review
Next How to Pack a Hiking Backpack for International Plane Travel