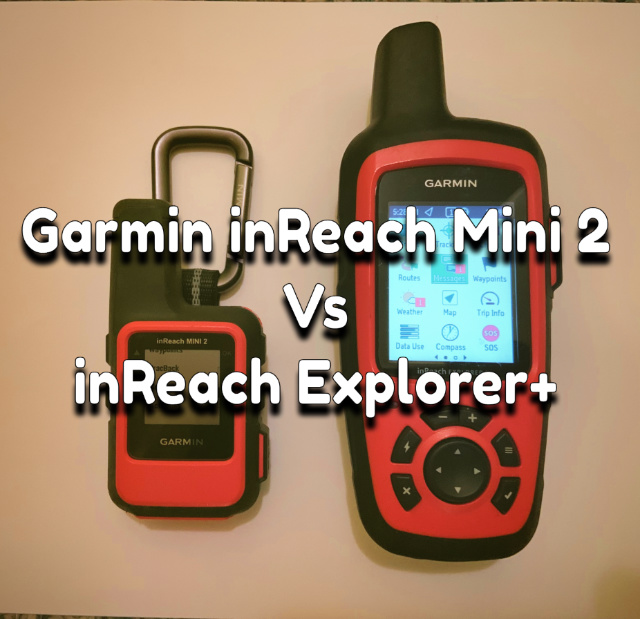 The Garmin inReach Mini 2 and the inReach Explorer+ are two-way satellite communicators that can send and received status messages to loved ones or alert emergency services if you need assistance. The inReach Mini 2 received a major upgrade this year (2022) that made it much easier to use, improved its battery life, and added some useful new features that the original inReach Mini (version 1) lacked.

Before the Mini 2 upgrade, I preferred the Explorer+ because it had a longer battery life, a richer feature set, and was, in my opinion, easier to use. I have since switched to using the inReach Mini 2 for hiking and backpacking because its new features and capabilities exceed those of the Explorer+. This isn’t a full review of the Mini 2 but a recommendation for you to buy it if you don’t own one, or to upgrade from the original Mini or Explorer+, if not now, eventually.

If you’re interested in a deep dive into the Mini 2’s features and functionality, I’ve included a 50-minute video below with Chip Noble, the inReach product manager, that explains how to use the device without a lot of salesy fluff. It’s a useful video to watch, even if you’re a pro user.

The most important thing, for me, about the inReach devices including the Mini, Mini2, and Explorer+, is that they are standalone, two-way messaging devices that can operate fully without the need for an external display device like a Smartphone.

Battery power is a finite resource in the backcountry, so you want to conserve what you have. If you have to signal for help, it’s better to use one standalone device to message with Search and Rescue and not two, an inReach and a Smartphone linked using bluetooth. It doesn’t make any sense to me to burn through two batteries, when one will do. That said, you can still send texts through an app running on a Smartphone with the inReach, but it’s not a requirement.

Two way messaging is also a critical capability. In the event of an emergency, you want to be able to communicate with Search and Rescue since:

If all you need is a two-way standalone messaging and SOS capability, that you keep turned off most of the time, then any of the inReach devices: the original Mini, the Mini 2, or the Explorer+ provide you with that capability. Where they really differ is in their add-on functions, multi-device integration, and future support.

Briefly, here are the new features and capabilities of the inReach Mini 2 that convinced me to switch from using the Explorer+ to the Mini 2.

The original inReach Mini had a battery that lasted about 50% less the inReach Explorer+. The new inReach Mini 2 can last about 3 times longer than the Explorer+ because Garmin used a new chipset in the Mini 2 that uses much less power and requires less frequent charging, even when you use power-hungry functions like 10-minute or 30-minute tracking.

However, I would caution you to take Garmin’s battery life estimates with a grain of salt, depending on your location. They were benchmarked in optimal operating conditions. For example, I can get 20 hours of 10-minute tracking, when hiking in the heavily forested terrain of the White Mountain National Forest where I live and hike. That’s a far cry from the 4 days that Garmin estimates when tracking in moderate tree cover, whatever “moderate” means. I don’t use the tracking capabilities normally for this reason.

If you need to track a route because you want to save it as a route or GPX file, I suggest you do it with a Smartphone App like GaiaGPS instead of the inReach Mini 2 because it requires much less battery energy expenditure because the data is stored locally and not pushed up into a satellite. Satellite handshakes chew up power, so it’s best to limit them if you want to preserve the battery.

The Mini 2 user interface has had a significant usability improvement that makes it much simpler to use than on the original Mini. It now consists of hierarchical menus that are similar to those used on Garmin’s other devices. It is also backlit so you can read it in the dark. This is important because most rescues occur after dark.

The Mini 2 interface is still not as easy to use as the Explorer+ for a complete novice, since its functions are not visible on the device screen. But with 10 minutes of familiarization, you could get a hiking partner or your 10-year-old son up to speed, in case you have a medical emergency and become incapacitated.

The Mini 2 has access to four GPS Satellite Networks, while the Explorer+ can only access one. This results in much faster GPS position acquisition and fewer ‘battery burning” attempts to find a signal. I’ve waited upwards of 15 minutes for a preset checkin message to be sent because the Explorer+ couldn’t acquire its GPS location to attach to the message. Sometimes it never gets a GPS signal even when I can get a cellphone message out. The Mini 2 is much faster because it has many additional satellites to receive signal from.

This capability is now automatic on the Mini 2 whereas it had to be manually activated on the original Mini. It creates a GPS track, minus topo map data, of your track so you walk it back if you get lost. It’s a lot like the tracks Garmin’s old monochrome GPS units would display before they could display topo maps.

It’s very useful for finding your car if you’ve headed off-trail to bushwhack a peak and didn’t pay attention to where you’d parked. It automatically starts when you turn on the device and uses very little power since its data is all stored locally. Of course, you still have to turn the device on to use it.

The Mini 2 requires a USB-C plug instead of the micro-USB interface used by the original Mini and the Explorer+. This results in faster charging and is the direction many other rechargeable devices are headed, including headlamps.

It’s very frustrating to be a consumer of an electronic device when you learn that the manufacturer isn’t going to support the software that accompanies it in the future. I expect that the Earthmate App, which works with the original Mini and the Explorer+ will be killed off and unsupported going forward.

The Mini 2 does not work with the Earthmate App and only works with Garmin’s Explore App, which is integrated with their watches, the Garmin fenix and the Garmin Instinct, so you can access inReach messages, send SOS messages, and navigate from your wrist. My hope is that they bundle more of the inReach’s capabilities into a watch eventually so it is a self-contained worn device, you know, like Dick Tracy’s watch.

If you want to leverage the other devices in the Garmin Ecosystem or just want to use an App that will be enhanced, this is a good time to switch to the Mini 2. Devices that support the Earthmate app are likely a dead-end. The Explore App includes a decent set of navigation features and map sets if you want to use a free mobile app, but it’s nowhere as good as GaiaGPS, which is what I use. Still it’s good fall back since GaiaGPS charges an annual subscription fee and is fairly expensive.

There are a few things I don’t like about the Mini 2, which you should be aware of.

The main reason I switched from the Explorer+ to the Mini 2 can be summed up as follows:

The Garmin inReach Mini 2 is also a lot less cumbersome to carry than the Explore+ since it’s so small and lightweight. That’s a feature that’s grown on me as I use it. It really does need to be at close at hand if you need to use it and having a smaller unit is much more convenient.

How to Use the Garmin inReach Mini 2

This a very detailed video about how to use the Garmin Mini 2 presented by Chip Noble who’s been the inReach product manager from day 1, when it was first developed by DeLorme, before Garmin acquired the company. It’s not “salesy” at all and contains a lot of good information that should probably be in a product manual.

SectionHiker is reader-supported. We independently research, test, and rate the best products. We only make money if you purchase a product through our affiliate links. Help us continue to test and write unsponsored and independent gear reviews, beginner FAQs, and free hiking guides.
Previous How to Cook One-Pot Backpacking Meals
Next How Much Water Do You Need for Day Hiking?