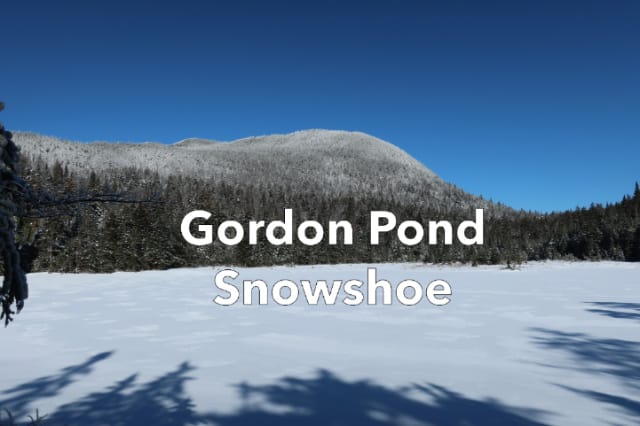 Gordon Pond is a remote pond on the Kinsman Ridge Trail, just below Mt Wolf, between Mount Moosilauke and the Eliza Brook Shelter along the Appalachian Trail. I doubt many people visit it (because it’s not en route to a 4000 footer) except maybe thru-hikers who need to catnap after climbing Mt Mossilauke, the first really big mountain they come to after arriving in New Hampshire. I’ve visited Gordon Pond five or six times previously on AT section hikes, bushwhacks, and peakbagging trips, but this was my first time tramping out to it in winter. What a difference the snow makes.

I was joined by four close friends who are strong winter hikers and I knew had the trail-breaking power to snowshoe out and back. Gordon Pond is an unusual enough destination that I knew the temptation to visit in winter would make them want to tag along, even though it’s a non-trivial route.

Our route started off Rt 112, north of Woodstock and followed the Gordon Pond Trail for 5 miles to the pond, before heading south on the Kinsman Ridge Trail (which coincides with the Appalachian Trail) for 3.2 miles back to Rt 112, finishing at the Beaver Brook trailhead below Moosilauke. The Gordon Pond Trail runs along the old Gordon Pond Railroad Line which was owned by Johnson Lumber Company (see map at White Mountain History.org) up to the pond. Photographer Eric Paul Donovan of ScenicNH.com has a good history of Gordon Pond that is also of interest.

The trail follows a series of old logging roads that are used by snowmobilers for the first two miles before crossing a river. That part was well broken out, but snowshoes were still the best traction option on this trip. Unfortunately, my snowshoes broke shortly after we turned off the snowmobile trails and entered the woods. One of the clevis pins holding the binding to the decking snapped and the second was quick to follow.

We tried fixing the snowshoe a number of ways, first with key rings and then twist ties. The keys rings were too difficult to twist into position and quickly became deformed, while the twist ties broke after a few steps. I was determined to finish the route, but also realistic and hoped I could proceed a bit more with just boots and microspikes.

We turned onto another snowmobile trail and I was able to continue behind my friends until we came to a power line clearing and the trail forked off into unbroken snow. It was too deep to continue and I encouraged my friends to continue while I turned around and hiked out alone.

As we were saying our goodbyes, I turned over my broken snowshoe and decided to try one last thing to patch it up…at the same time that my friend Larry had the same thought. We removed the televator my snowshoes (MSR Evo Ascents) and it fit perfectly into the binding pinholes. It was amazing. All of a sudden I had a working binding! One that held together for the next 6 miles without any issues at all.

After that little miracle, we set off again, headed to the pond. The trail was not broken out, so we took turns breaking trail. It was an unspoken necessity. The lead person would break trail until they were tired, usually about 200-300 steps and then step off to the side, so the person behind them could take over. Everyone else would pass the former leader, so they could go to the end of the line to rest until their turn came around again.

One of my friends, Beth, is a tracking enthusiast and we saw many animal tracks on this hike, including a pair of coyote tracks. This is currently coyote mating season and it looked like these two were a male and female, judging by the frequent patches of urine marking the snow. I don’t ever remember foxes and coyotes being so prolific in the White Mountains during previous winters, but I have seen them much more frequently this year than previously.

We crossed over two sizable waterfalls including Gordon Falls as we climbed closer to Gordon Pond. The stream and the falls were covered in snow, but they have a sizable flow the rest of the year. The snow started getting significantly deeper as we climbed to the plateau where the pond lies at 2600′ and we were surprised to find a faint track where someone had snowshoed around the perimeter of the pond before us. It was mostly filled in by subsequent snowfall and drifting snow, but it made route finding much easier from that point on.

We checked out the pond which was completely frozen over, but it was too cold to stay for long, even in the bright sun. Mt Wolf is an impressive sight however, overlooking the pond. I can still recall the first time I climbed Wolf, when I was section hiking the New Hampshire Appalachian Trail. I remember getting the idea to start a gear review website at the summit. I kid you not. This was a few years before I started SectionHiker in 2007, but the kernel of the idea was born on that hike.

The blue blazes were pretty good up to Gordon Pond, since it’s a side trail off the AT. But once we turned onto the Kinsman Ridge Trail, the AT’s white blazes were much more sporadic and faded. The snow was also much deeper on the ridge and we had to do some more climbing, up and down PUDs, to travel the 3.2 miles back to Rt 112.

I compensated for the loss of my snowshoe televator (which elevates your heel and makes it easier to climb hills) with footwork, stabbing my crampons into the snow for more purchase and angling my feet, like a duck walks, to prevent my snowshoes from sliding backward on the powdery snow as I hiked forward. It worked pretty well.

The hardest part of the Kinsman Ridge Trail is right at the end, where it plunges 700′ in about 4/10 of a mile. I’m amazed I didn’t fall but we all made it down in one piece, pooped, but pleased with a strenuous adventure under our belts.

REI.COM: Holiday Sale! Up to 50% off. Save on prAna, REI Co-op brand, Salomon & more. Coop Members get free shipping. No minimum.