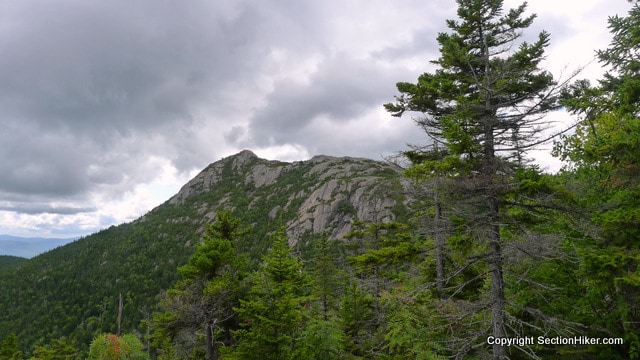 Mt Chocorua is one of the most frequently photographed mountains in the world according to the Appalachian Mountain Club’s White Mountain Guide. Located near New Hampshire’s Mt Washington, Chocorua is far from being the highest mountain in the White Mountain National Forest only rising to an elevation of 3475′. But it’s a hiker’s mountain with many fine trails that climb up its summit ledges and mesmerizing 360-degree views of the surrounding peaks, lakes, and valleys.

Two of the most popular trails that climb the mountain are the Champney Falls Trail, known for its jaw-dropping waterfalls,  and the Piper Trail.

Starting from the Kancamagus Highway. the Champney Falls Trail climbs the northeastern ridge of the mountain passing by famous Champney Falls and skirting a subsidiary peak named Middle Sister. Leaving the highway, the trail passes over a small stream with a washed-out bridge shortly after leaving the highway and proceeds south on moderate grades for 1.4 miles until it reaches the cutoff trail for the Pitcher and Champney Falls.

After passing the waterfall spur, the Champney Falls trail continues to climb up rock stairs. Like most White Mountain trails, the trail footing is rocky and covered with roots, so care should be taken.

Continuing from the Champney and Piper Trail Junction, climb to the Mt Chocorua summit over open ledge. The Piper Trail is marked with yellow paint on the rock surface and may be hard to see in places, although the route is popular and you are likely to see many people climbing it on a weekend day.

Climbing up the ledges is moderately difficult and some scrambling is required near the northeastern crag just below the summit. If you are hiking with a dog, a leash is recommended to protect your pooch and to keep them from interfering with other hikers over areas of precarious footing.

The Views from Mt Chocorua

If you crave open mountain views, few peaks in the White Mountains can compare with Mt Chocorua, even the 4000 footers. Located at the eastern end of the Sandwich Range, you can easily name 100 mountains from the top of Chocorua on a clear day, as far west as Mt Moosilauke and the Kinsmans along the westernmost border of the White Mountains and as far north as Mt Washington and the Southern Presidential Range. To the south and east, the eastern White Mountains are visible from Carter Notch, past Jackson and Conway, down to the  Lake District, and further east to the peaks in Maine.

Descending via The Champney Falls Trail

To descend, retrace your steps back to the trail junction between the Champney Falls Trail and the Piper Trail. Descending the ledges can be a bit harder on the knees than climbing so go slow and avoid any rocky wet spots or areas covered with moss and lichen because they’re very slippery. Weaving back and forth can also relieve some of the pressure on your knees rather than walking down the rocks in a straight line. Remember there is also no shame in butt sliding: it’s a well-used technique, even by the most experienced mountaineers!

Descending via the Piper Trail

Alternatively, you can descend Mt Chocorua via the Piper Trail which has many fine views of the east side (the front) of Mt Chocorua and it’s plunging cliffs. However, this trail is much more difficult to descend than the Champney Falls trail because it runs along steep open ledge towards Rt 16.

The distance between the top of Mt Chocorua and the Piper Trail parking lot is 4.2 miles, but it’s a very nice walk down passing the Camp Penacook Lean-to and through a beautiful section of forest. If you choose this option, be sure to park a car at the trailhead off Rt 16 or arrange for someone to pick you up when you finish your hike.

Care should be taken when climbing the trails up Mt Chocorua because they pass over barren ledges of rock which become can quite slippery when wet or covered with ice in winter. While low in elevation, Chocorua is also extremely exposed in the event of lightning storms. There are also few streams along the trails and it’s recommended that hikers carry 3 liters each on hot days to stay hydrated. Extra water should also be carried for dogs.

Philip Werner has hiked and backpacked over 8500 miles in the United States and the UK and written over 2500 articles as the founder of SectionHiker.com, noted for its backpacking gear reviews and hiking FAQs. A devotee of New Hampshire and Maine hiking and backpacking, Philip is the author of Backpacking the White Mountain 4000 Footers, a free online guidebook of the best backpacking trips in the White Mountains in New Hampshire and Maine. He lives in New Hampshire. Click here to subscribe to the SectionHiker newsletter.
Previous GPSFileDepot – Free Garmin GPS Maps
Next Olicamp Hard Anodized XTS Aluminum Pot with Heat Exchanger Review