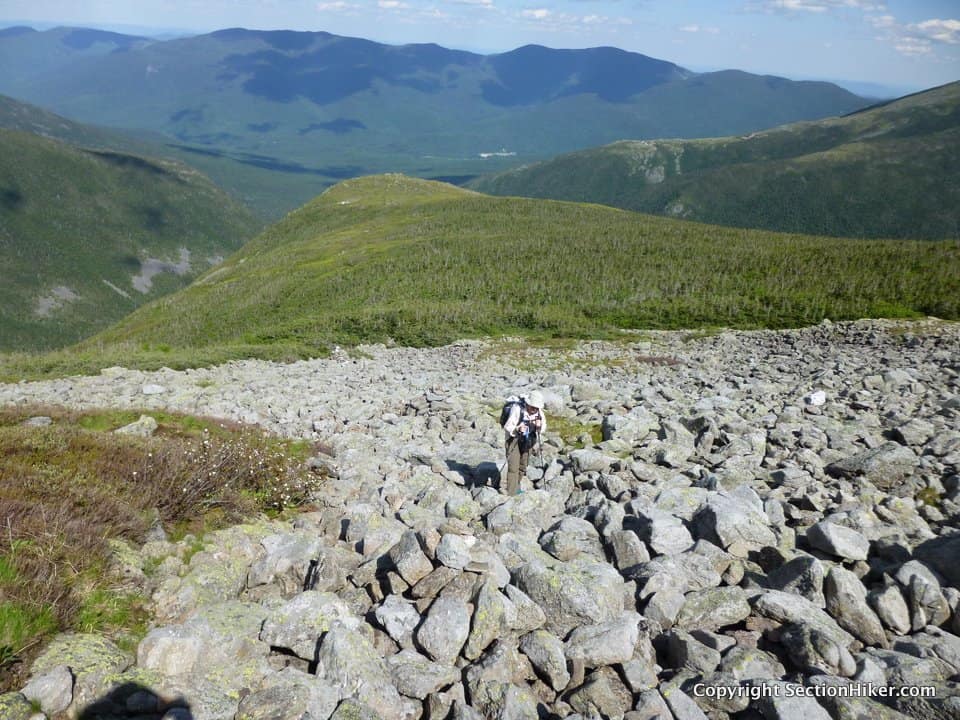 Beth and I met at the Caps Ridge Trailhead at 6:00 am. We wanted an early start to hike our 13+ mile route (with 6300′ of elevation gain), up Mt Jefferson via the Caps Ridge Trail, down Sphinx Col, and back up the Six Husbands Trail. I had just 3 trails left to complete out of the 608 on the White Mountain Guide trail list, a list that took me 10 years to complete.

Beth and I aren’t regular hiking partners, since I like to hike alone most of the time. But we have been pairing up on some of the more challenging and intimidating routes in the Presidential Range, like the  Huntington Ravine Trail, because we respect each other’s skills and experience. Beth’s also a very skilled backcountry navigator who’s completed the NH 200 highest list, which is mostly off-trail, and she should finish the trail list this autumn at the current rate. We also recently taught our first map and compass class together this past spring, which I expect we’ll offer at least once a year.

The first leg of this hike involved hiking up the Caps Ridge Trail to the summit of Mt Jefferson, the third highest peak in the White Mountains. The last time I’d hiked it had been in thick fog, back in September of 2012, and I didn’t remember the trail at all. This time we had clear, glorious views, and I was enthralled by the views of Mt Washington, the Southern Presidentials, and the nearby Dartmouth Range once we’d popped above treeline.

The Caps Ridge Trail is not the faint-hearted. It is a tough, knee-grinding trail to hike up and down, requiring a lot of rock scrambling over the caps, which are rocky peaklets, along the trail. Called caps, they’re similar to the “howks” you find on the Howker Ridge Trail or the “castles” on the Castle Trail, both in the Northern Presidential Range.

We reached the summit of Jefferson by 8:00 am, without a soul in sight. After a short snack, we headed down to Edmands Col to get on the Edmands Col Cutoff Trail, one of the three remaining trails I had left on my White Mountains Trail list. This short but challenging trail runs from Edmands Col to the uppermost portion of Six Husbands Trail across the northeast face of Mt Jefferson. It’s quite exposed, skirting in and out of krummholz, with steep drop offs into Jefferson Ravine far below. The trail is marked with cairns and best hiked early in the day before the rocks that form the tread heat up too much.

From from Six Husband’s Trail junction we hiked a short distance up to the Gulfside Trail (we’d have to repeat this section later in the day) and made our way south to the Sphinx Col Trail. If you were just hiking a Sphinx Col – Six Husbands loop, you’d bypass this Edmands Cutoff diversion and hike directly to Sphinx Col from Jefferson.

The Sphinx Col Trail is one of a handful of escape routes off the Presidential Range if lightning and thunderstorms roll up on you unexpectedly. It plunges steeply down to upper part of the Great Gulf Trail, close to Spaulding Lake and the Mt Washington headwall. It’s also quite wet with water running down the trail from a spring near the top, a handy fact to keep in mind if you’re in need of water on a Presidential Traverse. (See Natural Water Sources in the Presidential Range)

The trail description of the Sphinx Col Trail is a bit intimidating, but it’s not a difficult trail to descend. Just go slow on the wet rocks and make sure of your footing. The trail does cross back and forth across a stream, so you do need to look for blazes and cairns that mark the crossings and double back if you lose the trail. Beth and I did lose the trail at one point on our descent, but we soon found it again after a little creative bushwhacking since the trail corridor hugs the stream. If it’s a warm day and you’re not in a rush, there are several very nice cascades to see on the route down and pools to cool off in, if you’re so inclined.

The bottom of the Sphinx Col Trail intersects the Great Gulf Trail, which we followed down to the Six Husbands stream crossing over the West Branch of the Peabody River. This short section of the Great Gulf Trail is quite rugged and torn up by avalanche and flood damage. Just remember that the trail follows the river and you should be able to find it if it disappears from sight.

The Six Husbands stream crossing can be quite challenging in high water, so watch the weather forecast and let the river level drop for a few days after a heavy rain. There’d been a heavy rain a few days prior to our hike and Beth and I had postponed our hike together for a few days for just this reason.

The White Mountain Guide also has a scary description of the Six Husbands Trail, which has four wooden ladders that you need to climb during the steepest part of the accent. Once you leave the brook in Jefferson Ravine, the trail is one giant rock scramble up to the top of Jefferson’s Knee, a subsidiary ridge off Mt Jefferson which juts out into the Great Gulf. While there is some exposure, it’s not that bad unless you’re afraid of heights. There are plenty of handholds and the hardest part of the ascent is quickly over.

When you get to the top of Jefferson’s Knee, you’ll hike through a long stretch of dwarf trees (krummholz) until you get to the Edmands Col Cutoff Junction sign. This was the point where I finished hiking all the trails in the White Mountain Guide, a feat that I can still barely comprehend several weeks later.

From here, we hiked back up to the Gulfside Trail and made our way to the Cornice Trail which loops around Jefferson, intersecting with the Caps Ridge Trail below the summit on the west side of Jefferson. We’re were pretty beat at the point, 10 hours into this hike, and this roundabout route was easier than climbing to the Jefferson summit again. The rest of the descent down the Caps Ridge Trail passed uneventfully, and we celebrated with a cold beer back at the trailhead.

Editor's note: If you’re thinking about buying gear that we’ve reviewed or recommend on SectionHiker, you can help support us in the process. Just click on any of the seller links above, and if you make a purchase, we may (but not always) receive a small percentage of the transaction. The cost of the product is the same to you but this helps us continue to test and write unsponsored and independent gear reviews, beginner FAQs, and free hiking guides. Thanks and we appreciate your support!
Previous Bikepacking and Bikefishing the Swift Diamond River
Next Climbing the Great Gully and Chemin des Dames Trails in King Ravine