Hiking an Adams and Madison Loop 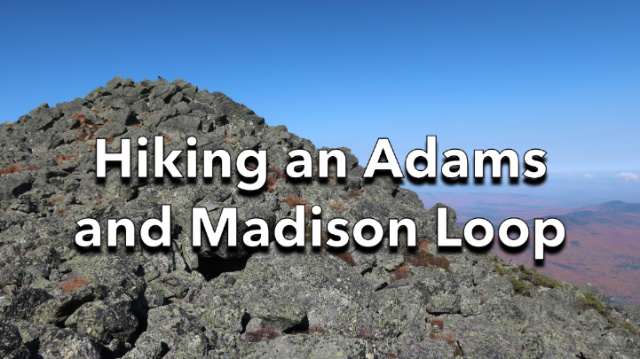 With a high-pressure system parked over the White Mountains, I set out for another October climb in the Presidential Mountain Range. With temperatures in the high forties, winds under 20 mph, and fall foliage peaking in the valleys below, I looked forward to hiking another day in short pants, perhaps the last until well into spring of next year.

With one day of rest after a spectacular Monroe-Washington-Clay-Jefferson Loop, I set my sights on climbing Mt Adams and Mt Madison, the second and fourth tallest peaks on the White Mountain 4000 footer list. Fearing crowds, I woke up at 5:00 am and arrived at the trailhead before 7:00 am to get an early start. I needn’t have worried because I saw very few people during the day, although I ran into a few of my like-minded friends on Madison in the afternoon.

There are a lot of different trails you can use to climb the Northern Presidentials, but I chose a few of the more difficult and direct, as in steep, paths for this hike. I like to alternate between different routes whenever I climb the 4000 footers, including those in the Presidential Range because it keeps things interesting. I do forget trails or at least parts of them, they get rerouted or the landscape surrounding them changes, so I’m constantly rewarded with new sights and experiences.

Here was my route plan for this hike:

The Airline Trail is the most direct trail up to Mt Adams, climbing scenic Durand Ridge, up the east wall of King Ravine. The Star Lake Trail plummets down the south side of Mt Adams to Star Lake, a shallow alpine tarn in the col between Adams and Madison, before ending at the Madison Springs Hut. From there, I climbed the Osgood Trail to the summit of Madison, before down hiking the very steep Watson Path, then the Brookside which runs along Synder Brook, before a quick exit to the trailhead via Valley Way. The entire hike took 9 hours with summit breaks to chat with friends, new and old, who I met along the way.

The Airline Trail has a reputation as being the steepest and gnarliest way up Mt Adams, but it’s just one of many trails that climb from up to the northern Presidential ridgeline. The Watson Path, the Howker Ridge Trail, Lowes Path, and The Castle Trail, and others, all have their own challenges to climb.

But the Airline Trail borders King Ravine, a huge glacial cirque (valley) on the North Side of Adams, that’s a wonder to look down into. There are several trails that you can hike (more like scramble) from the boulder-filled floor of the ravine up to its rim, which are fun, but quite challenging to ascend. Earlier this spring, I’d downclimbed (more like butt slid) down the Chemin des Dames Trail before climbing the King Ravine Trail headwall near the end of my second round of the White Mountain Guide (formerly called Redlining).

Then as now, I climbed up the Airline Trail and had a pleasant sit and snack at the head of the Chemin des Dames Trail (which is a few hundred feet above timberline) soaking in the sunshine and admiring the fiery splendor of autumn in the hills above Randolph below. As I sat there, a fellow named Drew came up the trail behind me, and we chatted for a while. We ran into each other much later in the hike, on the Brookside Trail, and finished the last 3 miles together.

From there, I began the final climb up to the summit of Adams, crossing the huge boulder field that forms its summit cone. You literally have to hop/walk from boulder to boulder to get to the top, following a sequence of huge rock cairns that mark the path.

I ate a sandwich at the top and chatted with a few other hikers, while admiring the view over to Mt Madison. While Mt Washington is the highest 4000 footer, Mt Adams has a much better view because the landscape drops precipitously down its flanks.

My plan was to hike down the north side of Adams on the Star Lake Trail and follow that to the base of Mt Madison. Normally, I’d refill my water bottles at the Madison Springs Hut at the hiker tap, but it was closed for the season, so I was rationing my water until I could get a safe place to refill. While there is a spring at the hut, it flows right under the hut and its toilets, so I wasn’t too keen about topping off there. I planned to wait until the base of the Watson Path where there’s a small waterfall to refill.

I had to pull out my map to find the Star Lake Trail, even though it was signed at the top of Adams because I couldn’t find the cairns marking it. Hoping to find them, I headed down the correct bearing and found them a bit farther down – they weren’t obvious amidst the jumble of rock on top of Adams.

The descent was very steep, but careful foot placement saw me down safely. I passed the very shallow Star Lake alpine tarn and made my way to the Madison Spring Hut. I sat on the benches outside and soaked up the sun while I rested my legs. The hut is all boarded up for the winter.

I was spent, but I only had 500 feet more of elevation to get to the summit of Madison, so I started hiking up the Osgood Trail slowly, pausing to rest every hundred feet. Looking back, I saw a woman with a headscarf climbing up the peak behind me. It can’t be, I thought. Denise Stassis wears a scarf like that. Low and behold, she was just finishing a south-to-north Presidential Traverse.  She’s an incredible hiker who just finished the New Hampshire Triple Crown, the first woman to do so. More proof that you can do anything if you set your mind to it.

Denise was racing off when reached the summit of Adams, but I also ran into my friend Keith at the summit. When I saw his bandana capped head from the rear, I wondered if it was him. But the boots were what gave it away. He has huge feet and wears enormous boots. Size 12 or something.  When I saw those I knew it had to be him. We hadn’t seen each other for close to two years when we hiked the Tripyramids together with a group of old friends.

We parted ways and I headed down the Watson Path, beginning the long hike back down to Appalachia. The Watson Path is another rocky beast of a trail although it gets a bit easier when you drop below treeline at 4320′. I filtered a liter of water when I reached the bottom of the trail at Synder Brook, before hiking out along the slippery Brookside Trail and Valley Way.

It never ceases to amaze me how little time has passed after one of these big hikes. This hike only took 9 hours, but I came away with a truckload of experiences to lock away in my memory. Nothing much happened in the world while I was hiking, but I traveled far in my mind…and on foot.

Editor's note: If you’re thinking about buying gear that we’ve reviewed or recommend on SectionHiker, you can help support us in the process. Just click on any of the seller links above, and if you make a purchase, we may (but not always) receive a small percentage of the transaction. The cost of the product is the same to you but this helps us continue to test and write unsponsored and independent gear reviews, beginner FAQs, and free hiking guides. Thanks and we appreciate your support!
Previous Hiking a Monroe, Washington, Clay, Jefferson Loop
Next Outdoor Research Transcendent Down Gloves Review