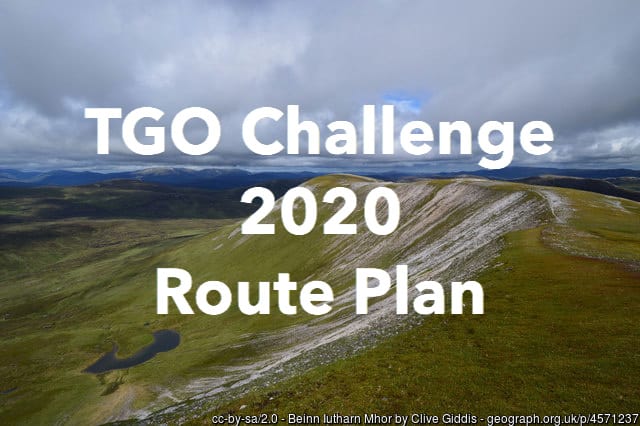 I’m headed to Scotland again in May to hike from the west coast to the east coast in this year’s 2020 TGO Challenge. This is an annual backpacking event, now in its 41st year, where 400 backpackers, hiking solo or in small teams, attempt to hike cross country in 15 days. Scotland is one of the few places where you can hike across an entire country without worrying about private property boundaries because there are access laws permitting use without prior permission, which makes an undertaking like this feasible.

There’s no one set route or trail that everyone follows. Instead, you have to map out a route of your own design and submit it for approval ahead of time. It’s reviewed by a handful of experts who are familiar with the terrain to ensure that it’s safe and feasible. Much of terrain that you need to traverse is quite mountainous and remote, and the route vetters as they’re called, provide very valuable advice about dangers that may be encountered and alternate routes that can be used to avoid them. These include washed out bridges, rivers in flood, high wind, cliffs, and the usual hazards of hiking and backpacking across exposed and mountainous terrain.

This will be my third TGO Challenge and I’ll be accompanied by my friend Ken, who’s a very experienced mountaineer with an impressive record of ascents in North and South America, Europe, and Japan. We get up to all kinds of mischief together in New Hampshire and I’m confident in his ability to overcome any challenges we’ll encounter. He’s never been to the UK or Scotland, but I’m sure he’ll be impressed.

We’ve planned out a moderately challenging route that’s 185 miles in length with 37,000 feet of elevation gain. That’s if the weather cooperates and there isn’t a prohibitive amount of snow on the higher peaks. You have to walk from one coast to the other in the allotted time, even if you have to modify your planned route. The use of a vehicle for any portion results in disqualification.

We’ll be camping out most nights in the hills since our route is quite remote and only crosses through two towns until we get to the east coast. We’ve built in plenty of off-trail, cross country portions because we both enjoy and teach compass and land navigation, with plenty of Tenkara fly-fishing opportunities along the way.

Here are some of the highlights of our planned route to give you a taste of what it’s like to hike in Scotland and participate in the TGO Challenge.

On our first and second day, we plan to traverse the South Glen Shiel Ridge, a ridge that has seven mountains over 1000 meters in height, called Munros. This includes a high camp on the ridge after the first peak.

After marching cross-country and bagging some smaller peaks, we’ll walk alongside the Caledonian Canal on the Great Glen Way into Fort William to resupply on day four.

From Fort William, we’ll hike through Glen Nevis at the foot of Scotland’s highest peak, Ben Nevis, and camp beside a Loch (Lake) at the base of Ben Alder and Beinn Bheoil. Ben Alder is the 25th highest Munro in the UK. Conditions permitting, we’ll climb both.

From there, we’ll traverse another ridge called the Fara, before descending in Dalwhinnie, a small town without any food shops, where we plan to send a resupply package. We’ll take a day off here to rest and to visit the famous Dalwhinnie Scotch Distillery.

From Dalwhinnie, we’ll hike east, largely off-trail for two days, bagging another two or three Munros along the way, before reaching Loch Callater Lodge, a rustic house owned by Prince Charles, where Challengers converge for “refreshment.”

From there, we climb back into the hills and bag two more Munros, including Lochnagar, a huge mountain made famous in a poem written by Lord Byron.

Lochnagar will be the last high peak we climb. From there, we’ll walk through Glen Lee to a convent in the tiny village called Tarfside, where Challengers converge as they near the east coast. We’ll head into the hills from there for two more days as we make our way to Dunnottar Castle, on the east coast, where we’ll finish our route.

More about the TGO Challenge