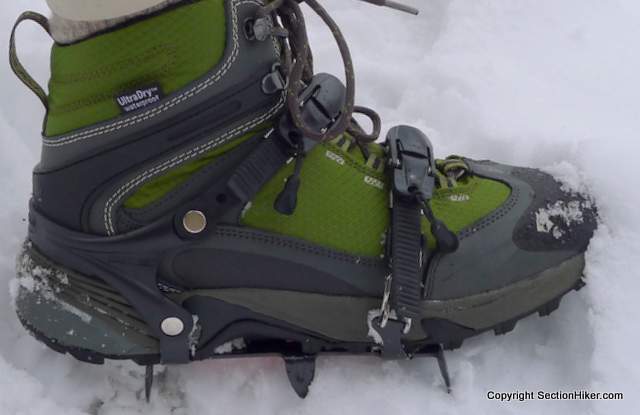 The Hillsound Cypress 6 Crampon is an easy to use instep-style crampon good for walking on flat or rolling terrain covered with packed snow and ice. While considerably beefier and more aggressive than Kahtoolha Microspikes, the Cypress 6 lacks the front points of Hillsound’s 10-point Pro Crampon, making them less suitable for winter terrain that requires any kind of rock scrambling or higher angle hiking.

Like the Hillsound Pro, the Cypress 6 Crampon attaches to your boot using a snowboard style ratchet binding system that makes them a snap to put on and take off. However, rather than running from the toe binding to the heel cup as on the Pro Crampon, the straps on the Cypress 6 Crampon loop over the top of your foot, providing a very comfortable and secure fit. The only caveat is the length of the straps on the Cypress 6, which may not fit over large technical mountaineering boots, or technical gaiters when worn over insulated snow boots or pack boots. If you have big boots or big feet, make sure you check the fit before you need to put the Cypress 6 Crampon on in the field.

As you’d expect, the Cypress 6 Crampon comes complete with built-in anti-balling plates that prevent wet snow from clumping under your boots, which is a real problem with microspikes in spring conditions. There’s also an ability to increase the width of the Cypress 6 so that it locks securely onto wider boots, or even multiple pairs of boots and shoes, providing easy compatibility with a variety of footwear, even trail runners.

There are two bolts on the bottom of the Cypress 6 which control its width, both set with an Allen wrench, which you are unlikely to carry with you on your hike. Once set and tightened, however, the width of the crampons doesn’t loosen. Still, I wish Hillsound would change this system so you could adjust the width by hand without a tool.

What’s it like to walk with the Cypress 6 Crampon, you wonder? While they’re very comfortable to wear, you have to maintain more of a strolling gait with an upright posture, rather than attacking the snow with the front of your feet. While you get the hang of it pretty quickly, forget about trying to walk up an icy incline because it’s difficult to thrust forward from your in-step, like you would if you were wearing a 10 or 12 point crampon with front points.

On the flip side, if the toe bindings on 10 or 12 point crampon painfully crush your toes or the extra friction causes toe blisters, then the Hillsound Cypress 6 Crampon is a godsend because the front binding doesn’t compress the front of your boots.

The Hillsound Cypress 6 Crampon also folds up much more compactly than the Hillsound Pros (although there’s only a 3.6 ounce difference between the two) or other lightweight 10 or 12 point crampons making them a useful traction aid when space considerations are paramount, like on a thru-hike.

Disclosure: Hillsound provided Philip Werner (SectionHiker.com) with a sample pair of Cypress 6 Crampons for this review.

Editor's note: If you’re thinking about buying gear that we’ve reviewed or recommend on SectionHiker, you can help support us in the process. Just click on any of the seller links above, and if you make a purchase, we may (but not always) receive a small percentage of the transaction. The cost of the product is the same to you but this helps us continue to test and write unsponsored and independent gear reviews, beginner FAQs, and free hiking guides. Thanks and we appreciate your support!
Previous The New Hampshire 3000 Footers and the NH 200 Highest
Next Stopped in Our Tracks on Wildcat Mountain