How to Choose a Backpacking Wood Stove 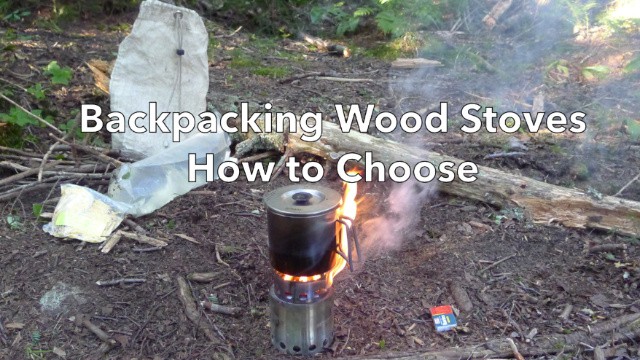 Backpacking woods stoves are a great weight saving option for boiling water on backpacking trips because they eliminate the need to carry fuel and a fuel container, such as an isobutane canister or alcohol bottle. As long as you can find dry wood to burn, and it doesn’t take much, and you’re someplace that doesn’t have a fire ban, you’re good to go. They can also add some cheer to your camping experience in spring or autumn when the days are short and the evenings are cool, while having much less impact than a campfire and leaving much less trace of your visit.

There are basically two types of wood stoves: Can-based stoves, including wood gasifier stoves, and Folding stoves that collapse flat for easy packing. Stoves also differ in the ease in which you can re-fuel them during a burn. For example, most can-based stoves must be fed from the top or restarted when they run out of fuel. Instead, many folding wood stoves have a side access port that you can feed more wood into while they’re still burning, without having to remove whatever you’re cooking.

Some can-based stoves, like the Solo Stove Lite and the Bushbuddy are called wood gasifier stoves because they have a two-stage burn, that generates heat by burning wood and a by-product called wood gas, making them very hot and efficient, while reducing all the wood you put in them to a fine ash. They’re basically double-walled cans that pipe wood gas from the inner can to the top of the outer can where it can be burned as fuel, thereby producing more energy from a single wood load.

You don’t have to use a wood gasifier stove for backpacking since a simple can with holes punched into it will also work. I once used Ikea Cutlery Holders as wood stoves and they worked pretty well as long as you used a windscreen with them. However, the problem with can-based wood stoves is that they’re not very packable and can take up precious space in your backpack. They also get pretty sooty, in a way that’s harder to contain than a stove that can collapse flat.

Most folding-style wood stoves can be packed flat, which makes them much easier to backpack with since they take up so little space. It’s also easier to contain the soot on their exterior since you can just slip them inside a ziploc baggy for transport. You still have to assemble them before use, but this is a trivial process that involves fitting together the sidewalls and a burn pan on the bottom to prevent scorching the ground that they sit on. Most of the time, the sidewalls act as pot supports and a windscreen, so they’re really quite self-contained. 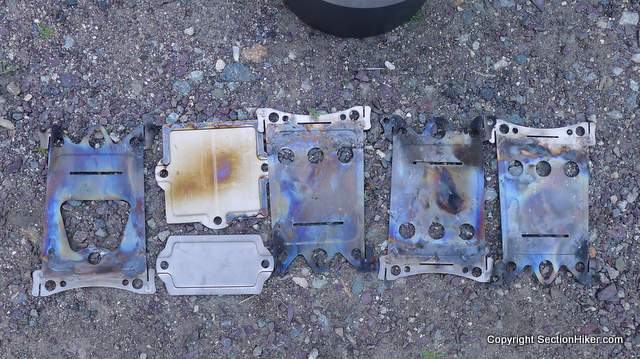 For example, the Emberlit FireAnt Titanium Wood Stove is collapsible and can be stored flat in your backpack. Many folding style stoves also have a refueling port cut into one of the sidewalls so you can add fuel to a pre-existing fire without having to stop cooking to add more fuel. You can even insert a longer piece of wood into the refueling port and just push more in, as the other end is consumed. This is very convenient and can eliminate having to saw or chop larger pieces of wood into smaller ones.

While folding wood stoves aren’t as efficient as gasifier stoves, it really doesn’t take more than 8-10 minutes to boil two or more cups of water on one. While that’s 5 minutes more than a canister gas stove, it’s still a pretty good tradeoff considering how much pack weight you’ll save by not having to carry fuel. Backpacking woods stoves also have a much lighter environmental impact since they don’t use petroleum-based fuels and create empty fuel containers, like used canisters, plastic ethanol alcohol bottles, white gas cans, that have to be recycled or buried in a landfill.

If you’re in a forest area, the wood needed to fuel a wood stove is usually quite plentiful. I usually pick up a couple of handfuls of small sticks lying on the ground and maybe some pine cones to help start the fire because they make good tinder. There’s rarely any need to carry a saw, process wood, or go very far to gather it. I start my woodstove fires with a vaseline covered cotton ball and a magnesium striker, but you could just as easily start it with dry tinder and a butane lighter.

If it’s rained and all the wood available is wet, it can help to carry some ESBIT fuel cubes so you can boil water or cook food for a day or two until the weather clears up. Just stick an ESBIT cube inside the wood stove and use it as a combination pot stand and windscreen, like you would with wood. It can also help to prop the fuel cube up higher in the stove so that it’s closer to the bottom of your cookpot. Since fuel cubes weigh a half-ounce each, and one will boil two cups of water or more, the added security of carrying a few extras amounts to very little extra weight.

Backpacking woods stoves can be a great way to reduce or eliminate the extra weight of carrying stove fuel and fuel containers. They’re not for everyone since they are slower and dirtier than alcohol, canister, or liquid fuel stoves, but they’re a lot of fun to use and less impactful than most other backpacking stove alternatives.

SectionHiker is reader-supported. We independently research, test, and rate the best products. We only make money if you purchase a product through our affiliate links. Help us continue to test and write unsponsored and independent gear reviews, beginner FAQs, and free hiking guides.
Previous ULA Ultra 24 Circuit Backpack Review
Next Recommended Winter Hiking Gear List: 2022-2023