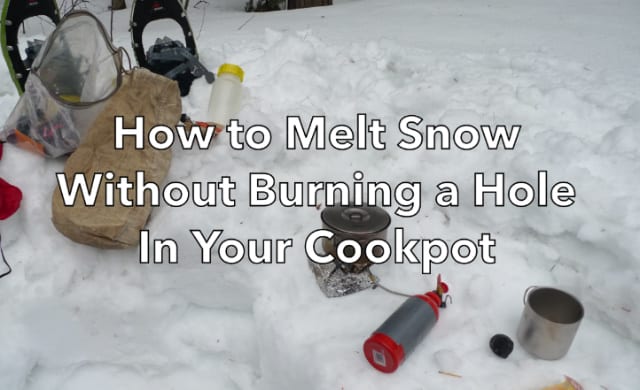 Winter backpacking requires the development of many new skills, particularly in the area of hydration and stove use. Chief amongst these is melting snow for drinking water since most of the streams you encounter will be frozen over and you can’t ingest enough liquid by eating snow. The most reliable method for melting snow and purifying the liquid by-product is to melt it and then boil it in a cooking pot. I usually melt three to five liters at a time so I have enough water for hot drinks, rehydrating dinners, and the two to three liters I like to carry in my pack during the day. It’s important that you still have some water left over in your bottles when you arrive in camp so you can melt snow.

When melting snow, you have to boil water in your pot, called seed water, before you can add snow to it. A cup of water is usually sufficient as a starter. If you add snow to your pot and it doesn’t have liquid in it, you’ll scorch the pot (which smells awful), or burn a hole through the bottom of your pot rendering it useless.  The seed water provides a protective barrier between the snow and the pot, much like cooking oil does with a frying pan and food.

Once you get your seed water to boil you can add clean snow to it very slowly, and preferably still in powder form so it melts quickly when it hits the hot water. When you’ve filled your pot half full with melted water, you can start to add bigger clumps. When all that is melted and has come to a roiling boil, it will be safe enough to drink or decant into insulated bottles for later use. Be sure to leave some in the pot as seed water for your next batch of melting.

You’re going to want to bring a 2L pot or larger for melting snow, with a wide bottom. Tall, narrow, and low-volume pots don’t work well. It takes longer to melt snow in them and you really have to babysit them while you’re doing it. Anodized aluminum posts are also better than thin titanium pots in terms of heat retention and because they heat more evenly without hot spots.

Having used stove systems like the MSR Reactor, I can’t say I’m a huge fan of their cylindrical-sized pots for snow melting because they have such limited capacity and small diameters. If you do have a Reactor, consider sizing up to their 2.5 Liter Reactor Pot, which is a good size for melting lots of snow.

SectionHiker is reader-supported. We independently research, test, and rate the best products. We only make money if you purchase a product through our affiliate links. Help us continue to test and write unsponsored and independent gear reviews, beginner FAQs, and free hiking guides.
Previous Dachstein Arctic Boiled Wool Gloves Review
Next Do You Need a Tent Footprint for Backpacking?