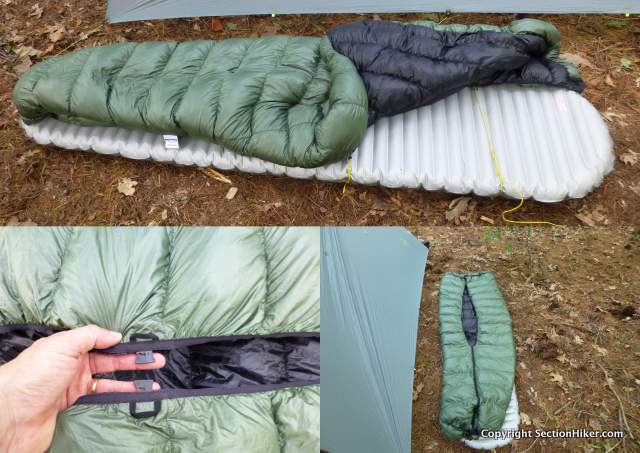 The Katabatic Gear Flex 40 is a premium quilt-style sleeping bag. Weighing 16.9 ounces (18.2 actual tested), it’s filled with 900 fill power goose down and comes with an effective sleeping pad attachment system to help prevent drafts from blowing under the edges of the quilt when you move around at night. Katabatic Flex quilts (available at multiple temperature ratings) also come with draft collars that snug around your neck and prevent heat from escaping when you move. The Flex footbox can be zippered closed and has a drawstring vent, which is convenient for temperature regulation as your body cools at night. Finally, you can also unzip the Flex fully and use it as a blanket in warmer weather – hence the name Flex, because this quilt has a chameleon of uses.

Katabatic Gear Flex 40 Quilt is a beautifully crafted top quilt that includes an innovative pad attachment system to keep you on your sleeping pad at night. A draft collar and zippered foot box help you control your warmth level across a wide range of temperatures.

A draft collar is a fabric tube filled with down insulation at the top of a quilt or sleeping bag that wraps around the upper chest and neck to prevent warm air from escaping at night when you move (the so-called bellows effect).  It’s frequently found on winter sleeping bags but has started to crop up more widely on ultralight sleeping quilts, including the Flex 40. It’s a fabulous feature, especially when you’re trying to “push” the warmth of your sleep insulation below its minimum temperature rating.

The top of the Flex 40 closes with a flat plastic snap behind your neck. Don’t worry, you can’t feel it. When you pull on the drawstring that tightens the neck closure, the draft collar conforms to your shoulders and neck. I consider a draft collar a must-have feature on a backpacking quilt and you’ll become a convert too if you get one.

A vented footbox is a useful convenience on a warm-weather quilt because it lets you regulate its warmth: when you go to sleep after dinner and your metabolism is running hot, you can vent the footbox to let off extra heat and easily close it later at night when your metabolism is less active or the external temperature drops.

A snap at the base of the Flex gathers the sides of the quilt together to form a footbox, while a drawstring that lets you adjust the size of the opening. The problem with a drawstring footbox closure is that you can still have gaps in it.  Katabatic addresses this with a short draft tube that runs below the snap and can be stuffed into the gaps formed by the drawstring.

A rear zipper on the underside of the quilt extends the footbox higher up your legs. It has a tendency to catch on the quilt’s shell fabric when zipped or unzipped. Just be careful when using it.

One of the things that distinguishes Katabatic Gear from other UL quilt manufacturers is the quality of their sleeping pad attachment system. It’s simple but effective at keeping the quilt wrapped around your body when you roll over at night.

The Flex has two sets of clips sewn to the inside edges of the quilt that lock into cords you wrap around your sleeping pad. The clips have two positions: one that controls the girth of the quilt and how much internal airspace you want and the other that locks the quilt in position. The attachment system works best with sleeping pads that have firmer edges like a self-inflating Thermarest Prolite pad, a foam Zlite pad, or a NeoAir Inflatable pad. Pads that have flexible edges like the Klymit Inertia can collapse when you roll over creating too much slack in the cord system to keep the quilt on you.

Do you need a sleeping pad attachment system for a quilt? Is using a cord based one, really worth the extra hassle of configuring it and clipping in and out whenever you need to get up at night. I think these are both debatable points. Big Agnes or Therm-a-rest style sleeve-based systems are arguably more effective and easier for most people to use without much weight penalty.

There’s also less of a need for a pad attachment system if you sleep in an ultralight bivy sack which tends to hold a quilt in place, even if it’s not quite as efficient at heat retention. Some people also dislike feeling confined by a sleeping bag attachment system, which can be a step down from a full zip quilt-style sleeping bag like the Feathered Friends Flicker 40 or the Enlightened Equipment Convert in terms of comfort and convenience. Net, net. While Katabatic Gear’s sleep attachment system is good, consider whether you’ll actually use it in the context of your entire sleep system and how essential it really is in the weather conditions you plan to camp in.

How does the Flex 40 stack up against comparable quilt-style sleeping bags than can be fully opened like a blanket from other manufacturers? Here are three slightly different alternatives, although I’m sure there are others I’ve missed.

The Katabatic Gear Flex 40 is a very nice quilt-style sleeping bag that’s quite warm to sleep with on a sleeping pad or in a hammock, even if you never use its sleeping bag attachment system or open it up in blanket mode. The draft collar and amount of 900 fill power down in the Flex 40 make it very warm quilt to sleep in, one that many people could likely use below its 40-degree temperature rating.

But people’s metabolisms when sleeping vary widely, and in the absence of any standard way of measuring quilt temperature ratings, the most important factor determining quilt warmth is still the number of ounces of high power down fill it contains. If you’re comparing top quilts from multiple vendors, don’t be fooled into thinking that a lighter weight quilt is necessarily better or warmer than another based on its total weight alone. Start by comparing the down fill power and weight and then use other warmth or comfort features as tie-breakers. Whichever way you slice it, the Katabatic Gear Flex 40 quilt is a winner

Disclosure: Katabatic Gear provided the author with a Flex 40 for this review.