In early September of last year, I set out for a 1-night solo hike over Mt. Moosilauke (4802 ft) on the Appalachian Trail. Moosilauke is the most western of the New Hampshire 4000 footers and on a clear day, you can see the mountains of Vermont and the New York Adirondacks from the summit. The name Mooilauke is an Algonquin word for “bald place” referring to the mountain’s bald summit.

My goal on this trip was to summit via the Beaver Brook Trail from the Kinsman Notch parking area where it intersects with the AT, and then descend to the south and camp at the Jeffers Brook Shelter. This route is a 9.4-mile hike with a 2000 foot ascent in the first 2 miles. After spending the night at the shelter, I planned to reverse my route, re-summit, and descend back down to my car, retracing my steps from the day before. This was fine with me. I was happy to be on the trail again even if it meant I was returning from where I started because I knew I wasn’t going to “return from where I started,” if you know what I mean.

Earlier in the autumn, I had hiked two other contiguous sections of the AT in this area summiting Mt Wolf from Kinsman Notch on a solo day hike, and North and South Kinsman, past the beautiful Kinsman Pond (~3750 ft), with a small group of peakbaggers from the Boston AMC Chapter. Both of those hikes were very strenuous and I expected that this section of the AT would be equally challenging.

That morning it took me about two hours to drive up to Kinsman Notch from Boston and I got onto the trail at about 9:30 am. It was a cool, windy,  overcast day and the summit was covered in cloud. I decided to go for it anyway and knew that I had a second chance for a view on my return trip the next day.

Despite a careful read of my well-thumbed White Mountain Guide, I could never have anticipated the beauty or the steepness of the Beaver Brook Trail. The trail is extremely steep, climbing over 1000′ feet per mile. It is also wet for most of the ascent making it very slippery in spots. There are a breathtaking series of cascading waterfalls (photo above) that run next to the trail most of the way up. Thankfully, the trail maintainers have secured ladders, rebar handrails and steps to the most treacherous spots to make the trail climbable. Still, it’s a tricky ascent with ample opportunities to break an ankle or have a serious fall.

I was in an enthusiastic mood and climbed the first 2800 feet in 2 hours and 15 minutes. I stopped for a quick snack just below treeline and was met by two other backpackers from New York who had just started their descent from the summit. They warned me about the windy conditions above the treeline, just as the sun broke from the clouds and the sky began to clear. I finished my sandwich, said my goodbyes and was on my way.

As I cleared treeline, the wind really picked up and I put on my wind shell, fleece hat and gloves. I was greeted by a series of stone cairns that marked the path to the summit. The wind was really blowing and I hurried onward, pausing only to snap a few pictures of these rock sentinels.

The top of Moosilauke is bare except for the foundations of an old inn that used to crown the summit. When I arrived at the top, there was quite a crowd present. There is a visitors center on Moosilauke and a carriage road to the summit making it accessible to the masses. The more experienced hikers were hunkered down in the windbreaks formed by the old ruins.

The views from the summit were outstanding and you could see the Green Mountains and Adirondacks to the west in Vermont and New York (see photo below). But given the crowds and the wind chill, I beat feet off the summit and continued south on the AT, descending by the Glen Cliff Trail. This was a tough hike down the mountain. While not as steep as the ascent, the Glen Cliff Trail is hard New Hampshire granite and punished my knees all the way down. I was thinking about what climbing this path would be like the next morning. 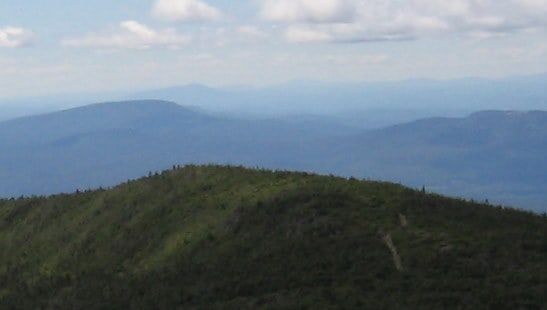 I continued onward, without a break, until I came to a stream next to a big field at the base of the mountain. I refilled my 3L platypus with water using my water filter and continued south, hiking through a forested level area called the Benton State Forest, north of the town of Glencliff. I soon saw some signage declaring this as the town woods and arrived at the Jeffers Brook Shelter. I hadn’t seen a soul since the summit. The shelter looked very new and was situated in a huge glade of tall hemlocks. This looked like a really nice place to camp. I don’t camp in shelters, by habit, and was more interested in pitching a tent on the forest duff in the hemlock glade.

I sat down, ate a hot sausage, and considered my options. It was just after 3 pm and I still had about 4 hours to kill before sundown. I considered hiking further down the AT but decided against it because I didn’t trust that the weather on Moosilauke would cooperate on the next day. Given the lay of the land, hiking over the mountain was the only way to get back to my car. So I decided to hike a bit more south to US 25 and try to hitchhike back to the Kinsman Notch parking lot. The thought of camping near a town on a Saturday night wasn’t that appealing to me. I like the solitude of real wilderness camping.

I hiked about 30 minutes more to US 25 and stuck out my thumb. I waited and waited. You’d think that all the locals would know that the AT crosses the road right there. After about an hour, a slackpacker doing a northbound thru-hike came out of the woods and met his wife who was sitting in a car by the side of the road (watching me this entire time). They obviously weren’t going to offer me a ride so I went over and begged for one. They relented but wouldn’t drive me back to the Kinsman Notch parking lot, which was at least 20 miles out of there way. I got them to at least drive me south a couple of miles to Rt. 118. We got to talking and they fed me a couple of bags of fresh-baked chocolate chip cookies which was kind.

I got our of their van at 118 and stuck out my thumb again. Rt 118 wraps around the southern perimeter of Moosilauke. There wasn’t as much traffic as I would have hoped and everyone drove by me without a second look. I waited and waited and waited for over an hour before I started walking up the road. It was really rural New Hampshire. There were a few farms along the road and a lot of undeveloped brush and I started thinking about making a stealth camp for the evening. Then a family stopped and picked me up. They were driving a pickup: a father, mother, and two daughters. They told me to hop in and gave me an energy drink that really hit the spot. I climbed in the back of their truck, which is technically illegal in New Hampshire, and they drove me all the way to North Woodstock, a good 20 minute drive around Moosilauke. It was freezing back there, but I knew that my chances of getting back to my car had improved substantially.

When we arrived in North Woodstock, I talked to the father and mother a bit and they asked if I was a teacher. They and their kids were trying to guess my profession while they were driving me to town. They told me that they had seen me standing by the road on the way to the town dump and wanted to pick me up but they were going the other way. On their return trip, they saw me and waved me over. It really eased my mind when they picked me up. That ole trail magic never lets me down.

My trip still wasn’t over at this point and I needed one more ride, up Rt 112 to my car. I got out of the family’s truck, crossed the road, and stuck out my thumb once again. This time I was picked up instantly by two climbers who were driving back to Vermont. They were smashed, driving a loaded Lexus and listening to cranked tunes. I made small talk as we drove up the road, but I was relaxed. I knew I’d make it to my car and get home ok.

Philip Werner has hiked and backpacked over 8500 miles in the United States and the UK and written over 2500 articles as the founder of SectionHiker.com, noted for its backpacking gear reviews and hiking FAQs. A devotee of New Hampshire and Maine hiking and backpacking, Philip is the author of Backpacking the White Mountain 4000 Footers, a free online guidebook of the best backpacking trips in the White Mountains in New Hampshire and Maine. He lives in New Hampshire. Click here to subscribe to the SectionHiker newsletter.
Previous EMS Techwick Short Sleeve Shirt
Next Stealth Camping