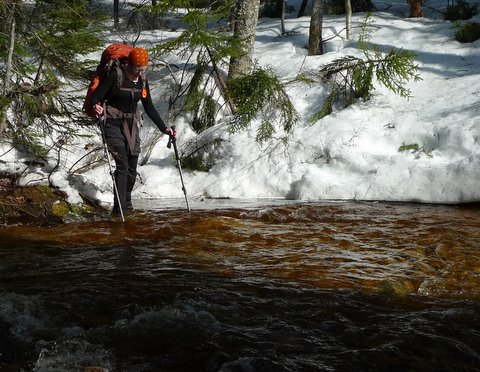 
Naturegirl and I climbed the Northern Peak of Mt. Hancock (4,420 ft) on Saturday. We had gorgeous weather with highs somewhere near 70 F, despite the fact that it's still early April in the White Mountains.


While the weather was good, trail conditions were awful. Snow depth was still about 3 or 4 feet, but the recent heat wave and  heavy rain had turned the trail to slush. I had snowshoes which mitigated this, but Naturegirl didn't, and she had a hard walk, slipping with each step.


Post holing was also a big problem, particularly on the peak. The trail up Hancock has a southern exposure and by the time we made it to the base of the peak (3.6 miles), the snow had gotten very soft. About 200 feet from the summit, dripping with sweat, I post holed about 10 times in the space of a minute, building myself a little pit about 4 x 4 feet deep and wide. I could go down slope no problem, but going forward was not happening, and I was hemmed in on both sides by brush. Somehow I managed to kick steps into the front wall and get out, but for a second, I thought I'd have to turn round.

Then there were the Hancock's famous water crossings which make this such a notorious climb. To get to the north and southern peaks, you need to hike 3.6 miles to their base, and depending on how you count, cross 5-8 stream crossings along your route (and back again). Despite the warm temperatures, the water was cold yesterday. However, despite all the recent rains and warm temperatures, water levels were fairly low, although they were a few inches higher in the late afternoon on our return. 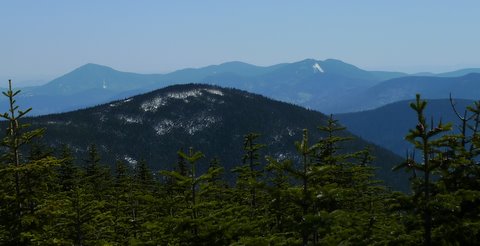 
After hiking in 3.6 miles to the base of North Hancock, we couldn't find the trail up or the tracks of previous hikers. I whipped out my map, figured out where the trail was supposed to be, and headed in that direction. After a few minutes of post holing in the trees, I found the trail up.

The ascent up North Hancock is very steep, rising 300 meters in 0.7 miles. With the sun beating down on us, we started to climb slowly in the soft snow, carrying full packs and winter gear. The blazing was poor, but I could discern the trail by following some very old and faint tracks, made weeks ago by a solo hiker. The climb took about 50 minutes, I reckon, and the views from the summit were glorious. I took a bunch of photos with a new Polarizing Filter on my Lumix. This one is a keeper. 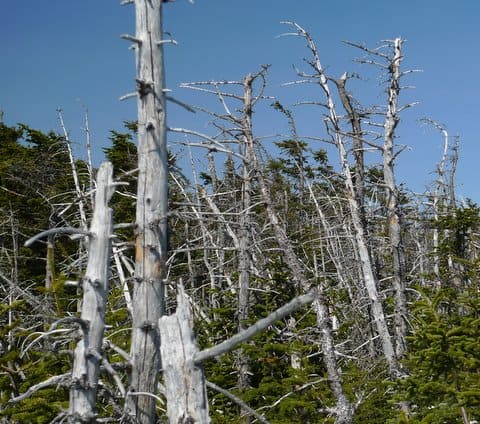 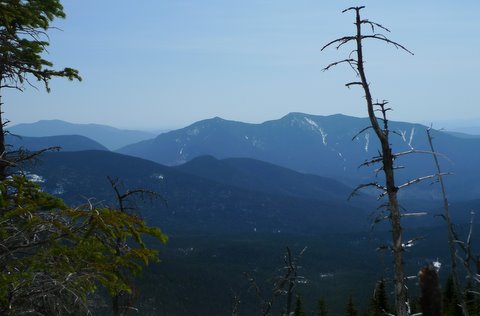 Yesterday's hike complements the ascent of the South Hancock we did about two months ago. Both the north and south peaks are a great pairing, and I highly recommend that you give this pair a go, regardless of the season.