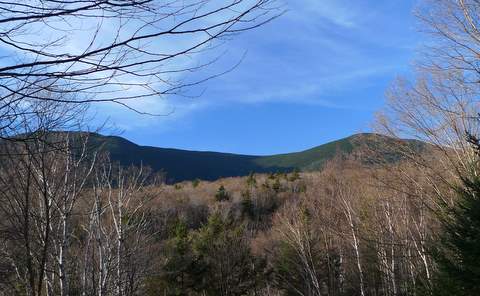 
I've just started another peak-bagging list called the Trailwright's 72 which includes all of the White Mountain 4,000 footers as well as many of their subordinate sub-peaks. However, it's a lot stricter, and effectively limits the number of peaks you can bag to one per day, requiring a lot more high elevation hikes to complete. More fun, I say.

In the case of Moosilauke, three of its sub-peaks are also on the Trailwright's list including Mt Jim (4,172 ft) , Mt Blue (4,529 ft), and South Peak (4,523 ft), guaranteeing that I will be spending a lot of time hiking up Moosilauke this winter and that I'll probably hike every trail on the mountain, which is the point of the Trailwright's list.

Last Saturday, my winter hiking partner and I had nice 6 hour – 8 mile hike up Mt Jim and Mt Blue. The weather was surprisingly mild for Moosilauke which is notorious for its wind. Trail conditions were wet and muddy below 3,500 ft, but turned to wet snow and ice when we hiked into the krumholz and above treeline. 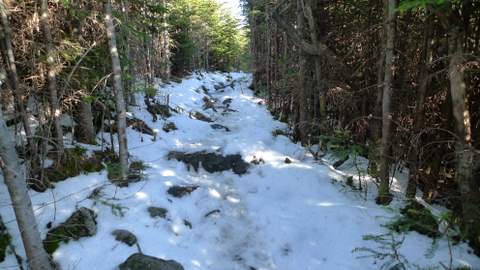 
The climbing was tough going this early in the winter season since we were carrying heavy packs with about 70% of our regular winter gear. After hiking most of the year with ultralight or close to ultralight loads and trail runners, my body is not used to carrying a heavy winter pack including snowshoes, crampons, an ice axe and extra water. I'm also not sure that trail runners provide enough support for me with these heavier loads, or how far into the winter season I'll be able to use them before switching to a proper winter boot. 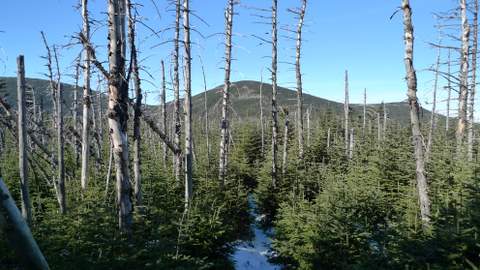 
Climbing Mt Jim was a no brainer because it's right on the Asquam Ridge Trail. But finding the Blue summit was a little more difficult because it requires a bushwhack through some very dense forest. I wandered around a bit on the summit cone trying to follow an unofficial path through a maze of blow downs and krumholz, complicated by the fact that I was postholing and we were running out of daylight. I gave up after a while and followed my tracks back to the path, resolved to be better prepared next time with pre-calculated compass bearings. I'd already bagged Jim and scoped out the lay of the land, which will be helpful on the next hike up here, using a different route, of course!

Hiking up Moosilauke was fun and we already have another hike planned to bag the South Peak. I have a feeling that the Trailwright's list is going to be a blast to pursue this winter and will help me become more intimate with the different aspects and routes up the major peaks of the Whites.