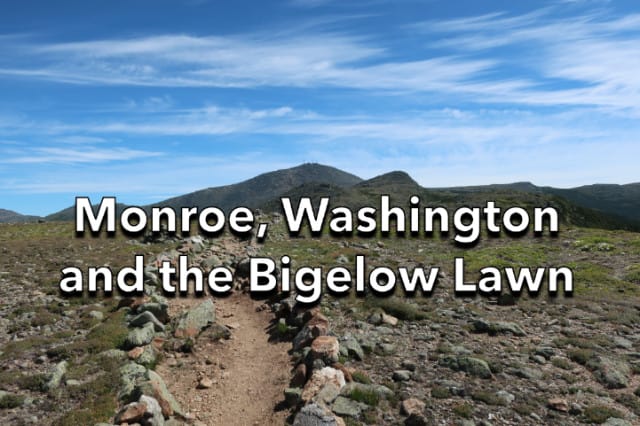 June is my favorite time of year to hike above treeline in the Whites, the sky is bright and clear, the wildflowers are blooming in the alpine zone, and the temperature is cool and crisp. It takes patience to wait for the right weather to come along, but when it does, you’ll want to call in sick and head for the hills.

I had one of those special days last week in the Southern Presidentials on a long hike up to Mt Monroe, Mt Washington, and the Bigelow Lawn, a vast expanse of sedge grass and quartz-topped rock cairns on the south side of Washington above Tuckerman Ravine. I’d have to say that the Bigelow Lawn and its counterpart, the Monticello Lawn on Mt Jefferson, are my favorite spots in the White Mountains, which is saying something.

I climbed up to the Presidential Range by the Edmands Path, which climbs from the seasonal Mt Clinton Road to the Crawford Path on the West Side of Mt Eisenhower. Driving to the trailhead at 7:00 am, I startled an enormous male moose with a huge rack, which I took as a good omen of the day to come.

While the Edmands Path is a rocky and steep trail (2.9 miles w/2450′ elevation gain), I made good time on the climb, reaching treeline in 2 hours. Along the way, I met two hikers who were returning from watching the sunrise on Mt Eisenhower. They were bundled up and reported that the winds on the ridge had been quite high (60 mph), which, along with thunderstorms, is often a good reason to postpone above treeline hikes in the Presidential Range.

The Mt Washington Observatory High Summits Forecast had forecast 60 mph winds that night, dropping to 20 mph by mid-day, which is pretty comfortable. I avoid hiking above treeline when sustained winds are over 45 mph, especially in winter, when the risk of frostbite is most acute. Mt Washington is one of the windiest places in the world and it pays to wait for calmer days.

For this hike, I was less interested in climbing mountains and more focused on finishing the trails that climbed the mountains, as crazy as that sounds. I only have a dozen trails left to finish hiking all 650+ trails listed in the White Mountain Guide, for a second time.

It takes about 2500 miles of hiking to finish hiking all of the trails, which are spread out from western New Hampshire to eastern Maine. Two other people have finished second rounds before me, but I’m doing it because I love the trail system and wanted to re-experience it again, not for any kind of award or anything. In fact, I joke that I’ll hold the FKT (Fastest Known Time) for the first person to finish a second round while carrying a stuffed animal since I usually bring one along to pose on my hikes. You can’t take list mongering too seriously after all. It’s just a game.

I hiked a short southbound segment of the Crawford Path that I still “needed” and then turned north and hiked to the Monroe Loop, a side path that climbs over Little Monroe and Mount Monroe, which is the fifth-highest 4000 footer in the Whites. I stopped along the way and chatted with a husband and wife who are training for a climb up Mt Washington for their 50th anniversary. They first met on Washington and they’re getting in shape by climbing the other 47 four thousand footers on the White Mountain 4000 footer list.

It’s been a while since I climbed Monroe and looking at my records, most of my climbs have been in winter where the landscape is very different. Things have also changed since I climbed the peak in warmer weather. I was a little shocked to find that an erosion-control stone staircase has been built down the front of the mountain en route to the Lakes of the Clouds Hut, but I guess it makes sense with all of the traffic that the hut attracts.

On the way down, I ran into a White Mountain Legend named Hiker Ed, who has climbed all 48 four thousand footers in every month of the year (called The Grid) eight times. To put that in perspective, it requires 1,000,000 feet of elevation gain and about 3000 miles of hiking to complete The Grid, just once.

Now 75 years old, Ed said he’s halfway through the 48 over 75 list. We’d been corresponding the past few days and we were both surprised to run into each other on Monroe. But then again, many of the peak hounds I know were hiking above treeline that same day because the weather was so fantastic.

When I got down to the hut I ate a sandwich and filled my water bottles. As a result of Covid, the AMC (Appalachian Mountain Club) has installed water spigots on the outside of the huts so people don’t have to come indoors for more water. It’s one the best things to come out of this damn pandemic, something that the hut croo sitting outside agreed with me about. Yes, they really spell it “croo.”

I continued up the Crawford Path, passing by the lakes which are alpine tarns situated next to the hut below the west side of Mt Washington. The path up to Washington is much the same as the one up the face of Monroe, basically, a sidewalk made with the local rock. My preference is for something much wilder and haphazard, but I suppose it keeps people from getting lost and cuts down on SAR missions.

I came to the Davis Path junction where it merges with the Crawford Path. These two trails have an interesting history in American Hiking. The Crawford Path is the oldest continuously maintained hiking trail in the United States, while the Davis Path is the second oldest. They were both established as hiking trails from Crawford Notch to Mt Washington which drew early White Mountain explorers and mapmakers like moths to a flame. Both trails are quite long by White Mountain standards and definitely worth hiking end-to-end or in sections to experience the landscape they access, some of which are quite remote.

I continued my ascent up Mt Washington, slowing a bit as I neared the top and made my way to the summit sign. Most of the people on Mt Washington get there by driving up the auto road or by taking a cog trail up to the summit that’s now powered with cooking oil. It’s a circus up there, with a snack bar and gift shop, and I try to minimize the time I spend up there. Winter is very different when the peak is closed to tourists and you can only hike to the summit.

I had a break by one of the weather tower footings and then hiked back down the way I’d come, passing by the Lakes of the clouds again and refilling my water. After chatting with the croo some more, I headed back down the Crawford Path, picking up a section I still needed, before descending down the Edmands Path and driving home.

My day’s route mirrored the one I’d hiked when I ventured above treeline in the Southern Presidentials for the first time some 15 years ago. I just never get tired of climbing these peaks and hiking these trails and count myself lucky for living so close to them.

Philip Werner has hiked and backpacked over 7500 miles in the United States and the UK and written over 2500 articles as the founder of SectionHiker.com, noted for its backpacking gear reviews and hiking FAQs. A devotee of New Hampshire and Maine hiking and backpacking, Philip is the 36th person to hike all 650 of the hiking trails in the White Mountain Guide, a distance of approximately 2500 miles, completing a second round in 2021. Philip is the author of Backpacking the White Mountain 4000 Footers, a free online guidebook of the best backpacking trips in the White Mountains in New Hampshire and Maine. He lives in New Hampshire.
Previous Tent Repair, Maintenance, and Cleaning Guide
Next Mountainsmith Mountain Shelter LT Review