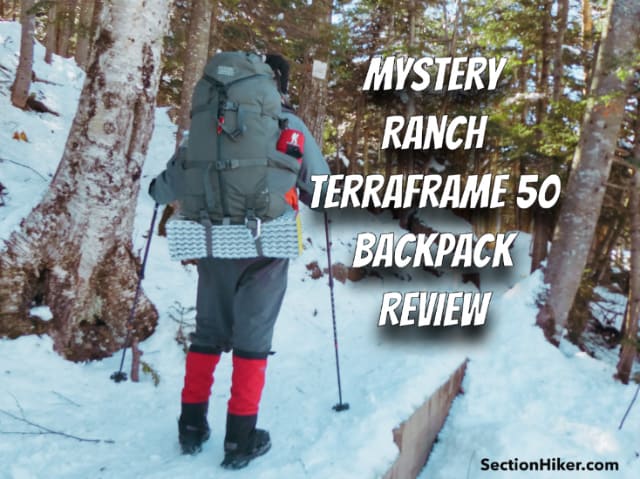 The Mystery Ranch 3-Zip Terraframe 50 is an external frame backpack with a load sling that’s good for hauling awkwardly shaped and heavy loads that won’t fit into a normal top-loader or roll-top pack. Load sling packs (also called breakaway packs), like the Terraframe 50 and its big brother the Terraframe 80, are popular with hunters because they make it easy to haul heavy meat, packed in game bags after it’s been field dressed and de-boned. Mystery Ranch is probably the best-known company to sell load sling packs into the general outdoor recreation market, but they’re also available from Seek Outside, Kifaru, and Kuiu.

With a maximum recommended load of 150 pounds, I tend to think of the Terraframe 50 as a working “persons” pack because it can carry an ax, trail maintenance tools, or even a chain saw, between the frame and pack bag. But it could just as easily be used to carry a pelican case, soft cooler, rope bag, base camp tent, or packraft for more recreational pursuits. That’s, in addition, you anything you can fit inside the pack bag or strap to its exterior.

For instance, if you were a trail maintainer and wanted to carry a chainsaw to remove blowdowns from a trail, you could position your saw between the pack and frame to carry it (as shown above). Next, you’d sandwich the saw between the frame and the pack bag (as shown below) by attaching its webbing straps to the frame. This makes it possible to carry quite heavy objects or stuff sacks to a base camp, for instance, but still have a regular backpack that you can use during the day for side trips.

The Terraframe 50 consists of an external frame and a pack bag. The pack bag has three zippers, one vertical and two diagonal so you can open up the entire bag or just access stuff in the upper part. There’s a hydration pocket inside and a single hydration port that comes out between the shoulder pads. The pack back also has two top lid pockets that close with zippers and two open side water bottle pockets. The top lid pockets are on the small side, but convenient.

However, the side water bottle pockets can only fit a single Nalgene and rather snugly at that. The pockets are not reachable while wearing the pack and while they do have cutouts to drain wet gear, like a dripping water filter, their small size makes them difficult to store multiple items.

I don’t particularly like the central zipper on the Terraframe 50, because I find my gear spills out of the pack willy nilly when I open it. It’d be far more useful if the pack could rest flush with the ground, but the pack has a very robust hip belt which prevents it from lying flat. The Terraframe 80 has a more conventional design with many more pockets and compartments for gear organization. I wish it was available in a 50L or 60L size instead of just 80L.

There are numerous external compression straps on the Terraframe 50 pack bag, which serve the dual purpose at attaching the pack bag to the frame in load sling mode or as regular compression/attachment points when it is used as a regular backpack. They make it very easy to carry a foam sleeping pad or tent body underneath the bottom of the pack or attached to its front.

Unfortunately, the small size of the side bottle pockets makes it difficult to terminate long objects like tent poles, paddle shafts, or axes in the side pockets and store a water bottle in them at the same time. These are best stowed using the load sling capability, between the frame and pack bag.

The compression straps are on the Terraframe 50 are quite long in order to serve their dual function. Mystery Ranch provides velcro cord keepers to wrap up any excess webbing that is not needed and keep it out-of-the-way. However, these cord keepers are not sewn to the ends of the webbing, making them very easy to lose. Other pack makers, like Exped, sew them to the ends of their webbing straps and it’d be nice if Mystery Ranch did the same.

The Terraframe 50 also has numerous webbing loops that can serve as attachment points, to lash additional gear to the pack bag. There are four such loops on the top lid and three at the end of each zipper. The latter lets you tension the zipper for smoother operation. There is also a short run of MOLLE loops at the base of the bag.

Mystery Ranch has an adjustable-length frame system called the Futura Yoke that they use across many of their backpacks. The Futura Yoke lets you adjust the height of the shoulder pads so that they correspond to your torso length. This is done using a velcro-backed yoke that slides up and down along the frame and is pretty standard across adjustable-length pack makers.

What’s different about the Terraframe’s external frame, is its flex and shape. It has a flat frame, rather than being curved at the top and bottom, and flexes dynamically with you as you move. This is achieved by using a carbon fiber frame with two vertical stays and three cross braces. The Terraframe has a wide and stiff hip belt that locks over your hip bones and won’t slip when worn. It also has wings that are tightly coupled to the base of the carbon fiber frame, rather than floating free. This is very different from most internal and external frame packs where the pack bag and the frame are detached move independently from one another.

The result is an external frame that fits close to your body, making it good for scrambling like an internal frame pack, but with the load-carrying capacity of an external frame pack. It’s rather clever, but better suited for military and hunting use where people carry 100+ pound loads, rather than the outdoor recreation market, where maximum load weights are considerably less.

The Mystery Ranch Terraframe 50 is an external frame backpack that can carry very heavy loads, with a load sling capability that lets you carry large or awkwardly shaped gear between the frame and the pack bag. While the load sling is useful for hauling a big tent or stove for base camping, I question the Terraframe 50’s utility for weekend or general-purpose backpacking since a 5-pound backpack with a small 50L capacity isn’t that attractive when compared with similar volume backpacks that weigh considerably less.

While I didn’t have a chance to review the 6.1 lb Mystery Ranch Terraframe 80, that’s a more reasonable base weight for a high-capacity expedition backpack that’s comparable to a Gregory Baltoro 75 or Osprey Xenith 88 in terms of volume and functionality. The Terraframe load sling capability also makes a lot more sense in an expedition context, where you’d be more likely to haul extra food or technical climbing gear.

What I also find surprising about the Terraframe 50 is that it’s not available with interchangeable pack bags, so that you could use different volume pack bags with the same frame. While that would make the Terraframe system harder to sell through retail outlets like REI, it would certainly provide a lot more value for consumers that fall in love with the Terraframe and want to use it across different sports and functions. The use of lighter weight and waterproof fabrics like XPac (which Mystery Ranch has used in the past) would also increase the attractiveness of its pack bags.

Mystery Ranch provided the author with a backpack for this review.

SectionHiker is reader-supported. We independently research, test, and rate the best products. We only make money if you purchase a product through our affiliate links. Help us continue to test and write unsponsored and independent gear reviews, beginner FAQs, and free hiking guides.
Previous Therm-a-Rest Vesper 45 Ultralight Backpacking Quilt Review
Next Superfeet Carbon Insoles Review