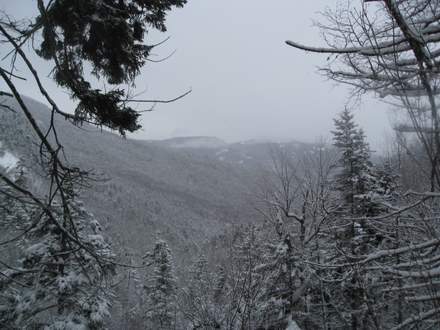 Naturegirl and I got out on our first hike of the New Year on Saturday, snowshoeing 7 miles to Nancy Pond and back. We had driven up to the White Mountains the evening before and were staying at the Boulder Court Cottages in Twin Mountain, NH to get in two days of winter hiking in before driving back to Boston and my first day at a new job.

Climbing Mt Nancy has been on our wish list for a while. It’s a pretty long hike to the summit which is just under 4,000 feet and requires a bushwhack for the final 900 feet of ascent. It’s located in the Carrigain Region, right on the border of the Pemigewasset Wilderness on the other side of RT 302 from Mt. Crawford, which you can just see in the distance in the photo above.

We had originally been planning to climb Mt Cabot which is one of the northernmost 4,000 footers. We decided to postpone that attempt because a huge winter storm was forecast to hit the area. The higher summit forecast for the day called for 150 mph winds, 30-40 degree (F) wind chills and heavy snow starting at mid-day. In addition, the trail up to the summit of Mt Cabot is located at the end of a remote road and we didn’t want to get stuck up there if we got a lot of snow.

Despite this brewing storm, the hike up to Nancy Pond was relatively calm because the trail is located in a deep ravine that is protected from the wind. 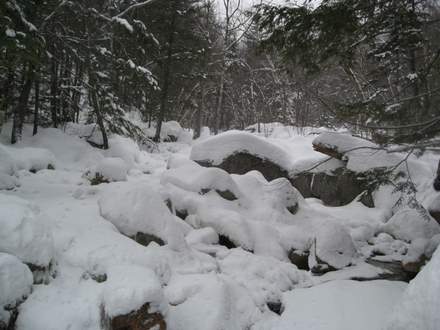 The trail parallels a large stream filled with huge boulders. This must be a very wet trail in spring and summer because we had to do a lot of stream crossings during the ascent. These were mostly frozen over, but we picked our way carefully across the larger ones to avoid falling in along the ice shelves.

The trail had been mostly broken out in the past, but there were a few inches of fresh powder and that forced us to snowshoe all the way up and back. After, 2.8 miles we came to the Nancy Cascades, a 400 foot waterfall which must be magnificent the rest of the year: it was almost completely frozen over when we arrived at it’s base.

From the cascades, the trail continues ascending via switchbacks, to Nancy Pond, above the waterfall, at 3.5 miles. The pond was frozen over and covered with snow when we passed by. The area around it must be quite boggy and swampy the rest of the year, since we were obviously hiking over frozen streams and wetland.

The Nancy Pond Area is a wildlife research reserve and we saw a lot of animal tracks on the way up, including hare, moose, and deer. The map shows a boggy wetland area about a mile further up the trail at about 3,200 feet, which must be why researchers have chosen this spot to study.

I used the telecasters on my new Lightning Ascent snowshoes during the ascent and they really helped make the climb in snowshoes a lot easier. You can’t use them on the flats however and it is a pain in the ass to have to bend over wearing a 30 lb pack to flip them up when you need them. But I developed a way to flick them up using the handle of my hiking poles that makes them a lot easier to deploy as needed. Your trekking pole grips just require a little horizontal nub which you can push under the telecaster and flick up. To flick them down, just whack them down again with the handle of your trekking pole.

When we got to the pond, we decided not to go for the summit because of the storm and headed back. Good thing to, because when we got to the switchbacks we could see the wind blowing all of the snow on Mt Crawford down the mountain into Crawford Notch. Chris sped up when she saw that and we made it back to the car in about two hours. Total time for the hike was 6 hours for 7 miles of snowshoeing and 2,600 feet of ascent.

But the adventure didn’t end there. The roads in Crawford Notch had really deteriorated since our arrival in the morning and I almost didn’t make it up the hill by the Highland Center despite my expertise with a manual transmission. Once we did get back to the cottage, it didn’t sound like we’d be able to escape the White Mountains until Monday at the earliest due to heavy snow and high winds predicted through Sunday night.

Although it snowed 2 feet that night and we could barely get out of our cottage the next morning, we did make good our escape to Boston before the holiday traffic hit later in the day. Conditions were still pretty sketchy with 30-40 below zero wind chills on Sunday, so we bailed on a second hike. Hopefully weather conditions will improve later in January so we can bag a few more of the high peaks.

SectionHiker is reader-supported. We independently research, test, and rate the best products. We only make money if you purchase a product through our affiliate links. Help us continue to test and write unsponsored and independent gear reviews, beginner FAQs, and free hiking guides.
Previous NOLS Wilderness Guide: A Book Review
Next Planning a Cross-Country Hike