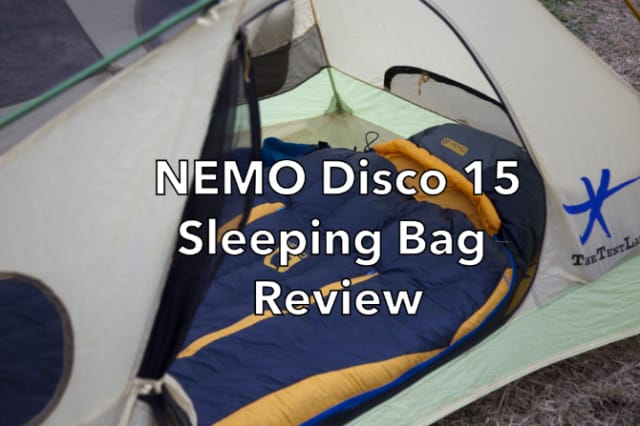 The NEMO Disco 15 is a spoon-shaped three-season down sleeping bag for camping and backpacking that has more elbow and knee room than a traditional mummy bag.  Its thermal retention and draft management features add to its versatility, and several well-designed small features make for a bag that contributes to restful sleep.  Highlights of the bag are its stellar zipper, 650FP water-resistant down insulation, a draft collar, and slits called Thermo Gills for temperature regulation.

Designed for Side Sleepers

The Disco 15 a great choice for the side sleeper or those who feel confined in a mummy bag.  Its thermal regulation features extend its range, making it a good choice for a longer trip that has both warmer and chillier nights.

The Disco 15 is a spoon-shaped mummy sleeping bag, a modification to the traditional mummy shape invented by NEMO, for side sleepers. It has an hourglass shape that’s wide across the shoulders and feet so you can turn around inside the back without feeling encumbered.  The contour follows the typical range of motion of the knees and shoulders.  Not only is the spaciousness a benefit for sleeping positions, but the extra elbow room also makes changing positions much easier than a traditional fit.

The drawback to the more generous cut is obvious: a larger bag means more material and more fill to insulate it, and the larger interior volume means that it takes longer to warm up.  While the Disco 15 compromises well between spaciousness and weight, there’s definitely a tradeoff that may tip the scales too much for those who begrudge every extra ounce in their pack.

Another factor contributing to the comfort of the Disco 15 is its soft lining.  The taffeta material avoids the slickness of many sleeping bag fabrics, and it feels pleasant to the touch.  As an added bonus, the interior and exterior material is relatively free of crinkles and rustles, making for a quieter night’s sleep than many bags provide.

The NEMO Disco 15 is insulated with 650FP down fill that has a hydrophobic coating to resist water.  The down is RDS-certified as responsibly sourced and is PFC-free.  This choice of fill material keeps the weight sufficiently low to be a backpacking bag while keeping the cost down. In comparison, a 15 degree down sleeping bag insulation with 800+ fill power goose down can cost 50-75% more than the Disco 15. That’s a sizeable amount of money.

Draft management is smartly handled by the Disco 15.  A full-length draft tube prevents loss of heat along the zipper, while a flap of down that NEMO calls a “Blanket Fold” replaces a mummy bag draft collar with a flap of insulating material that can be pulled inside to prevent heat from escaping around the upper chest or folded outside to vent excess warmth.  It’s a great feature, that’s intuitive and easy to adjust in the middle of the night.  If you’ve ever struggled with a mummy draft collar at night, you’ll appreciate it. When combined with the drawstring closure at the side of the face opening, the bag’s temperature can be nicely fine-tuned.

NEMO  has also included what they call “Thermo Gills” to the top of the sleeping bag over the torso which can be unzipped to release excess heat.  Two zippers running lengthwise on top of the bag allow ventilation in the torso area without exposing the interior of the bag to drafts.  They work really well, providing just the right cooling when I was too warm.  This extends the useful temperature range of the sleeping bag to warmer nights than would be comfortable in a similar bag.  The only thing I didn’t care for with the Thermo Gills was that the zipper pulls were small, tapered, and slightly slick, which made them hard to locate in the dark and use with gloves.

The Disco 15 uses the new ISO temperature rating standard (ISO 23537-1:2016, for all my fellow nerds), which supersedes the EN 13537 rating previously used.  This testing resulted in a lower limit of 14 degrees Fahrenheit. This puts the Disco 15 firmly in the shoulder season category, capable of handling cool spring and fall nights but probably not a cold winter one.

The larger cut of the Disco 15 makes it more prone to slightly warmer or cooler zones within the bag, especially around the legs when you move them around.  This is a sign of the design tradeoff between more space and warmth retention; a bag without room to move has no such zones but is more confining.

One top-notch feature of the Disco 15 is the high-quality zipper featuring an anti-snag plow.  This design almost totally eliminates snagging, which not only saves annoyance but also protects the shell of the sleeping bag from rips and holes which cause leaked insulation material.  I was able to use the zipper at all angles, with both hands, in the dark, and in a variety of positions without a single snag.  The zipper has a gusset at both ends to keep its metal away from warm skin on a chilly night. The men’s model, available with left zipper only, is also able to connect to the right-zippered women’s model for a double sleeping bag.

Ever woken up at 3 AM with cold, wet feet because the footbox of the sleeping bag was touching the inside of the tent and absorbed condensation?  That’s not a fun experience!  The Disco 15 features a waterproof/breathable footbox to prevent this situation, which is a really nice touch because not only are wet feet uncomfortable but allowing them to be dry at night alleviates maceration and helps the skin be less blister prone.

When the temperatures drop, keeping batteries warm is important to preserve the performance of the chemical reactions that deliver power.  The Disco 15 has a small pocket over the left shoulder that can store them in an insulated spot.  The pocket was sufficient to store a phone, a USB power pack, and a few AAs.

Another feature I particularly like on the Disco 15 is the pocket in the head area that can hold a pillow or be stuffed with clothing for extra padding below the head.  This keeps the pillow firmly in place regardless of twists and turns, and it’s in the right position to give proper support to the head.

The Disco 15 reviewed here is an update on a previous model, so keep that in mind, and make sure you purchase the new bag if you want the latest and greatest features, or the older model bag, which is currently discounted and on sale. They’re both excellent bags. Here are the key differences between the new and older Disco 15.

The NEMO Disco 15 sleeping bag offers luxe comforts, extended versatility, and well-considered design, at the cost of increased weight.  It’s a great choice for the side sleeper or those who feel confined in a mummy bag.  Its thermal regulation features extend its range, making it a good choice for a longer trip that has both warmer and chillier nights.  The extra touches of the pillow pocket and waterproof/breathable footbox show NEMO’s attention to detail.  While heavier than many comparable bags, the extra weight can make the difference between getting a comfortable night’s sleep or not, especially if you’re a side sleeper.

Disclosure: REI provided the author with a sleeping bag for this review.