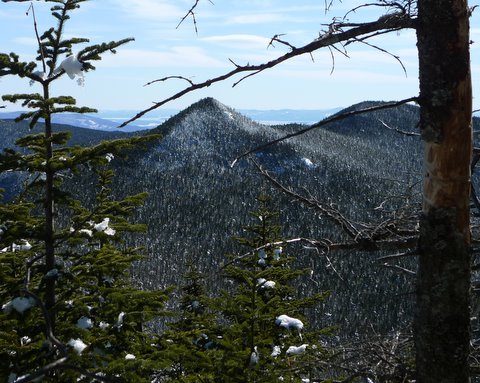 Nature Girl and I took a run at the Tripyramids on Saturday, trying to bag the North (4,180 ft), Middle (4,140 ft) and South (4,100 ft) peaks. We hiked in on the lesser used Pine Bend Brook Trail in order to climb the North Peak first, instead of using more frequently traveled Sabbaday Brook Trail, which is a longer but more gradual route. That choice bit us in the ass.

A very big storm had hit the White Mountains the prior weekend, dumping 3 feet of snow or more on the peaks, and many hiking trails, including our own, were still not broken out very well. That, and the fact that temperatures reached the fifties by mid-morning, made snow conditions very challenging, turning the trail into a post-holing granular-slush.

We started our hike at the trail head, just off the famed Kancamagus Highway. Due to last week’s snow, the trail head itself was difficult to find since there are 10 foot walls of plowed snow on either side of this twisting mountain road that have buried most of the trail signs.

Nature Girl and I started off bare booting, but I switched over to snowshoes after about a mile. Nature Girl, who was leading, wasn’t having any problems, but I literally weigh twice as much as her and I was post-holing in the soft, wet snow. I noted then that the temperature had climbed to 50 degrees.

We continued onward, losing the trail at one point, because the painted blazes, which are normally head height, were all covered by the snow. I spied a snowshoe trail through the trees on the other side of a stream and crossed over to see if it was our trail. It was, and we continued on. 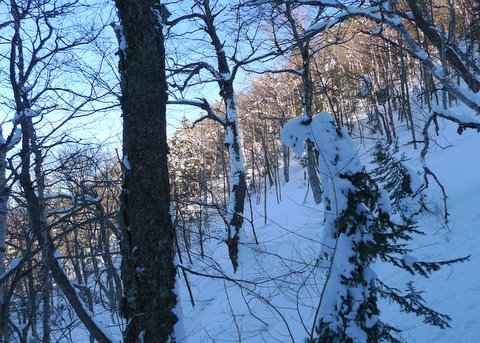 After 2 miles we came to the crux of this route. Over the next mile, the trail climbs 1,740 feet up a ravine to Scaur Ridge. This was a brutally steep climb. I led, powering up using the televators on my MSR Lightning Ascent snowshoes. The trail was not well broken out here, and I was sinking deeply into the snow which was sheering off laterally down the very steep slope. Nature Girl followed kicking steps in crampons, but I could tell she was tiring.

Eventually, we made it to the top and had a food and water break. My legs were zonked and I knew then that my glycogen reserves had been sorely depleted. Getting to the first summit was going to require sheer will and determination.

I ate a big Kit-Kat bar, some nuts, and started sucking on hard candies to try to get my blood sugar back up. Nature Girl was clearly beat but she’s a tough egg despite her elfin size. I knew that her dark chocolate would help her get going.

After our break, we started heading east along Scaur Ridge following a snowshoe track. The were no signs or blazes, but I knew we were headed in the right direction and I occasionally caught glimpses of North Tripyramid’s Northern Slide in full sunlight. Some people ski down this precipitous avalanche zone in winter. We met one of them hiking up when we were descending. His fly was open but I didn’t say anything.

The Scaur Ridge trail loops around the northern side of North Tripyramid before ascending about 500 feet to the summit. The trail runs through pine trees which were heavily laden with wet snow from the recent storm. After a half mile, we started to ascend to the the summit and I was heartened by blue sky above the trees. We were close!

I told Nature Girl that I was turning on my Buddha power and forced my legs to climb the final slope to a small forested peak with semi-obstructed views snow-covered Mt Washington and the Presidential Range to the north. I wandered over to look at Middle Tripyramid (top photo) while Nature Girl summited. It was clear that this was the only peak we would try to make today.

At the top, we sat in the sun and ate more food. It had taken us 5:30 to climb the 4 miles in and we only had 4 hours of daylight left to make it back to the car.

Being conservative turned out to be the right choice as the descent was not trivial. When we headed back down to the Scaur Ridge trail we had a little trouble finding the trail junction back down to the Pine Bend Brook Trail. I knew that we had to turn north and descend just before we came to one of the nameless tops on the western side of North Tripyramid. But Nature Girl was unsure where we were, and hesitant to make a wrong turn because her energy was so low. I walked in front of her for a few minutes, found our tracks, and whistled for her to follow. 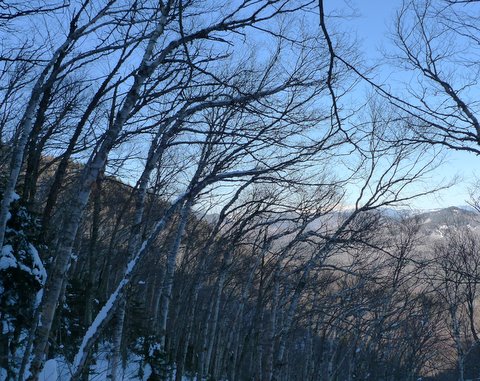 From here, I changed back over to crampons and descended back down the very steep section of the Pine Bend Brook Trail using an ice axe in case I needed to break a slide. The going was easy, but I post-holed a few times. Someone had obliterated our trail up, by sliding down it on their butt and filling our steps with soft snow.

We made it down to height of land without incident, but daylight was fading fast. The rest of the hike out was a slog. I switched back over to snow shoes to avoid post-holing but fell into a stream when the bank collapsed under me during a crossing. I missed having my unzipped rain pains fill up with water by about an inch, but soaked my fleece gloves in the fall. I had a second pair, so it wasn’t a big deal.

Nature Girl also got wet during a stream crossing, when a snow bridge we had hiked over on the way in, collapsed under her. She ended up going feet first into a standing pool of water, which freaked her out, but just soaked the exterior leather of her gore-tex lined ice-climbing boots.

When we got back to the car, we were zonked. The sun was setting as we drove out on the Kanc into Lincoln, New Hampshire, for hot coffee and tea loaded with sugar. That revived us enough to cruise back south the Boston where I had a big spaghetti dinner and promptly nodded off. Next time, we’re hiking up the Sabbaday Brook Trail.