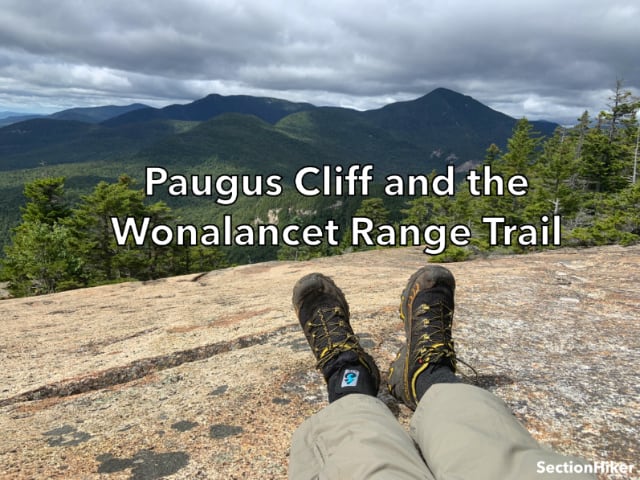 Mt Paugus is an infrequently-visited  3000 footer that has great views of Mt Chocorua and Mt Passaconaway because it’s situated in between these two popular peaks. I hiked up it over the weekend to sit on its south-facing cliff, which is a huge expanse of open ledge, that’s perfect for picnicking and just hanging out to enjoy the view.

There are a number of ways to hike to the summit of Paugus and it’s a fun project to hike all of them. I approached the peak on the Lawrence Trail from the west on this hike, but climbing the peak from the east on the Old Paugus Trail is also a fun and challenging route. I did that hike last spring, only to get stopped just below the summit because I was post-holing in snow and couldn’t find the trail. Therefore, one of my objectives on this most recent hike was to climb the peak from the opposite side and hike to the point where I’d left off this past spring.

Here are the trails I hiked on this latest trip to Mt Paugus:

The total mileage for this hike was 12.7 miles with 4200′ of elevation gain. It took me 8 hours to hike, including breaks.

I’d originally planned to start this hike at the Ferncroft Trailhead and hike up the Old Mast Trail to the Lawrence Trail, but the Ferncroft Lot was full when I arrived at 8:30 am on a Sunday, with peakbaggers who planned to climb Mts Whiteface and Passaconaway. The local landowners have all posted no-parking signs on the private property around that trailhead because it’s been overrun in recent years, so you’ll need to get there early to get a spot. Being familiar with the local trails, I did a quick mental recalc, parked at the Brook Trail trailhead and juggled my trails to do my loop in the opposite direction I’d planned.

The Cabin Trail begins off a driveway on Rt 113 passing a house on the right before it enters the woods. It’s a very mellow climb through open forest until its end where it sidehills along a steep slope. That last section isn’t terrible yet, but the hillside is clearly giving way, and a slip down the slope would be undesirable.

The Lawrence Trail dips back downhill as it approaches Mt Paugus before climbing up its west side. When I last hiked this trail some years ago, it had been newly rerouted and was in perfect condition. However, erosion seems to have taken a huge toll on the trail, laying bare its foundations, once again. While somewhat steep, it has switchbacks as you approach the summit. I soon summited and took a break and had lunch sitting on the cliffs while admiring the view. I’d been there before, but the view never gets old.

After lunch, I hiked down the Old Paugus Trail to the point where I’d been stopped last spring. It was less than a tenth of a mile from the summit, would you believe, and a short scramble down and then back up to the summit ledges.

Leaving the summit area, I hiked back down the Lawrence Trail toward the second half of my objective – the Wonalancet Range Trail. I knew this was going to be a long hike, so I’d checked on the availability of water sources beforehand in the Guthook New England Hiker App, and several streams were listed. Most of these were bone dry, however, with the exception of a stream just to the west of summit cliffs. I was able to eek out a liter of water from a very tannic stream, but water is water, and I was grateful to have a liter to replace the one I’d drunk with my lunch.

I continued down the Lawrence Trail and then started climbing the Walden Trail, which may well be the hardest trail in the Sandwich Range. It’s heavily eroded and has many steep ups and downs. I’ve hiked it in all seasons and it’s a challenge, especially in winter, when the trail is buried and very difficult to follow.

There’s a short unsigned herd path on the left just before you reach the Wonalancet Range junction that leads to a small ledge with a great view. I’d never been down it so I turned and followed it. It does have a nice view and was well worth the micro detour.

Back on the Walden Trail, I turned to hike down the Wonalancet Range Trail, a trail I haven’t been on for many many years. I remember climbing it in winter, with mountaineering crampons, but didn’t have a memory of what it looked like in 3 season weather. It follows a ridgeline, but there is a gnarly section of ledges on the main trail which can be slippery if wet or icy. A shortcut trail exists to bypass these ledges, but I “needed” to hike both.

I hiked down the main trail and over the ledge section which was thankfully dry. I then turned onto the shortcut and did an out and back on that too. I could have sworn there was a ladder somewhere in these trails, but maybe that’s just a false memory.

I followed the main trail down to the Ferncroft Trailhead, where it ends, before turning onto a cross country skiing trail on the left which joins Ferncroft to the Gordon Path. The ends of the Gordon Path are no longer signed, but the trail is still blazed, so you can follow it back to Rt 113. It’s a little disconcerting toward the end because it passes through a field next to a person’s house, but there is still a conservation easement that permits its use. Just continue down their driveway to Rt 113 and turn left to get back to the start of the Cabin Trail, which is a short walk down the road.

Philip Werner has hiked and backpacked over 8500 miles in the United States and the UK and written over 2500 articles as the founder of SectionHiker.com, noted for its backpacking gear reviews and hiking FAQs. A devotee of New Hampshire and Maine hiking and backpacking, Philip is the author of Backpacking the White Mountain 4000 Footers, a free online guidebook of the best backpacking trips in the White Mountains in New Hampshire and Maine. He lives in New Hampshire. Click here to subscribe to the SectionHiker newsletter.
Previous Enlightened Equipment Recon Bivy Review
Next Sierra Designs High Side Tent 1P Review