Peaking and Peeping on Carrigain 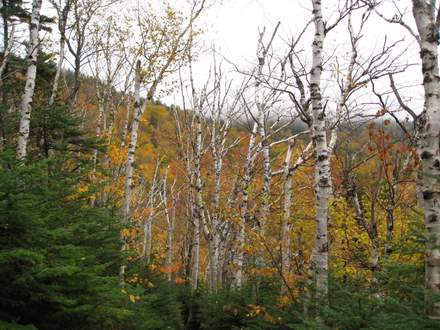 I took a break from section hiking the Appalachian Trail this weekend and climbed Mt. Carrigain (4,700 ft), the 14th highest peak on the White Mountain 4,000 footer list. Fall foliage is at its peak in the mountains and Carrigain is said to have the best views in the Whites. It’s situated at the southern end of the Pemigewasset Wilderness, which is an area I haven’t hiked at all, but want to explore further next year. The peaks and forests in this area are well away from the trailheads, which means fewer people in the backcountry.

As usual, I got up at 4:30 am and drove to the Whites. I took me about 2 and a half hours to make it to the trailhead and I was on the trail by 7:45 am. I had driven north in light rain, but the sky was clearing when I drove through Crawford Notch, so I was hoping to have a clear summit. 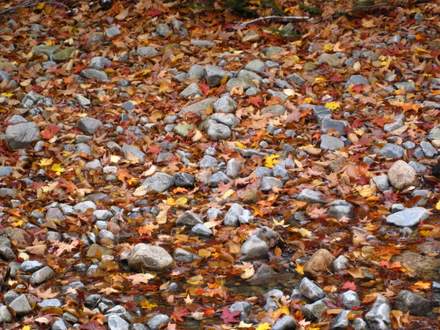 It’s a 5-mile hike up Carrigain from the Sawyer Rd parking lot with an elevation gain of about 2,750 ft. I was carrying a full pack to train up for two overnight backpacking trips I’m doing in the next two weekends. I’ll be experimenting with some major new gear variations before winter including the Scarp 1 Tarptent, Golite Ultralite 20 down quilt, Thermarest Neo, and Montbell Breeze Bivy and I wanted to see how they carried beforehand. I was also wearing my leather Asolos for the first time in several months: definitely heavier than my non-leather Asolo Flame boots, but there is no comparison in terms of the added support and better toe kick protection. I love my leather Asolos (gush).

The trail up to Carrigain starts out easy but gets increasingly challenging as you ascend. It follows a beautiful stream for the first mile and a half with many excellent wild campsites along its banks. I’m going to have to come back here and do some more hiking and camping in the area.

There are a few easy stream crossings over Whiteface Brook and Carrigain Brook, but I could see how these would be more challenging in deeper water. As it was, I was stepping on submerged rocks to get across.

As I got higher up Carrigain, it got colder and there was a light rain falling by the time I started climbing the mountain proper. The footing was a bit slippery but not too bad. I wore my rain shell for a while but switched over to my new Marmot DriClime Catalyst Jacket before breaking treeline for a little bit more warmth. The DriClime has a soft wicking liner which kept up amazingly well with the sweat that builds up under my pack during a climb. This is going to be a great layer for winter hiking.

When I broke treeline, the summit ridge was completely clouded over. Visibility was about 25 yards and a steady wind was blowing over the areas unprotected by Krumholz. I checked my map and saw that there were two high points along the ridge and I knew from reading the White Mountain Guide the previous evening that there was an observation tower up here somewhere.  I continued along the top of the mountain, stopping briefly to investigate a covered up well, which must have been the water supply for a fire ranger sometime in the past.

When I got to the base of the fire tower, the mist was still thick as soup. I thought about climbing the tower, which is only about two stories high. As I watched the mist woosh by me, I heard this otherworldly tinkling sound, like Santa’s sleigh bells. As it turns out there was someone else up at the summit, a guy named Ed, who looked like a bundled up Santa, with a hyper welsh terrier. They were playing fetch with a dog ball that had bells in it. Actually, it was micro-fetch since a long throw would have taken the dog off a cliff. I got to play with the dog myself, while I passed the day with Ed.

Ed was waiting at the summit for a hiking dog named Terra and about a half dozen other hiking dogs and their retainers. Terra was going to be completing her 48th White Mountain 4,000 footer on Carrigain and all of the other dogs were there to celebrate with her. From what I gather, this particular dog is known far and wide in the Whites.

After a short chat with Ed, I headed back down the summit. He was hopeful that the weather would clear in an hour or so, but I wasn’t going to hang around, although technically, I had the shelter to do so. I headed down the way I came and had a little surprise: awareness. 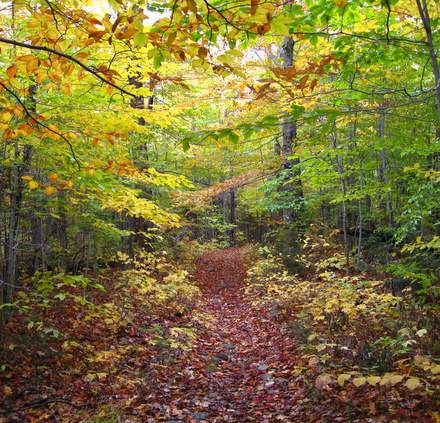 Hiking is always meditative for me, in the sense that I try to be present for it by thinking and feeling what I’m doing, instead of thinking about work, or the past and the future. Being in the present or aware during my hikes relieves me of the anger, anxiety, and fear that I carry throughout the week and really recharges my batteries.

On my hike up Carrigain, I wasn’t feeling any undirected anger, which is an emotion I often feel for the first mile or so on a Saturday hike. Instead, I was very focused on the sensations in my feet and right knee and on temperature regulation, as I climbed up the mountain with a full pack. So, you can imagine my surprise on the descent when I really became aware of the colors and woods around me.

I recognized that I’d been on the same trail during my ascent, but things just looked a bit different: sharper and lusher. It may have just been a matter of light or possibly time. Autumn is the one season, it seems, where a trail can change it’s appearance dramatically during the course of a few hours. Falling leaves and the reflection of rain on them can change the way the forest looks.

My state of heightened awareness didn’t really hit me full force until I got down to 700 meters of elevation, which is about 2.5 miles from the trailhead. After that, the rest of this hike was a kaleidoscopic marvel that I savored, pausing frequently to frame scenes in my mind and absorb the autumn glory.