When we think about which wild animal encounters to avoid in the backcountry, bears, snakes, and mice are on the top of most backpackers’ lists, not the homely porcupine. Perhaps porcupines should be taken a bit more seriously. 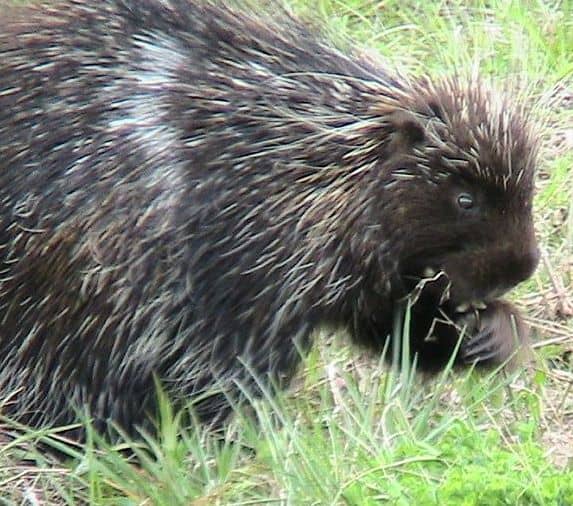 You see, porcupines love salt, and they will go out of their way to gnaw on anything that contains salt, particularly sweaty boots and backpack straps. They can do a lot of damage to these if they get to them, so you should take precautions like keeping your boots and pack in a tent with you, instead of outside your tent on the ground. When I camp in a hammock, I am also very conscious of this, and hang my boots and pack on my ridgeline, out of reach of these prickly scavengers, who are also excellent tree climbers.

In North America, porcupines can grow to be as large as medium sized dogs, weighing up to 40 lbs and living up to 18 years of age. They are the second largest rodent in North America, eclipsed only by beavers, and range throughout all North America, Alaska, and Canada. Porcupines are herbivores, which makes them crave salt since it’s not present in large quantities in their normal food. They obtain it from salt licks, animal bones, and human artifacts such as wooden tool handles, canoe paddles, human-constructed wooden shelters, and from road salt. In my travels, I’ve seen signs at many shelters on the Appalachian Trail, in the Catskills, and in the Adirondacks warning campers about the presence of porcupines, and it’s not uncommon to see parts of shelters that look like they have been gnawed on by wild animals.

The good news is that porcupines do not travel in packs. They are highly territorial and vigorously defend their territories from other males and females in their area. When threatened, porcupines will visually display their quills at a would-be attacker, and audibly chatter their teeth. They are also nocturnal which is good and bad, in that it is unlikely for you to stumble upon one unexpectedly, but they can do your gear damage when you are asleep and unable to intervene.

The best advice I can give you is not to discount porcupines. They can seriously disrupt a backpacking trip if given the opportunity to gnaw on your shoes, boots, or backpack straps. Take precautions and keep these close to you, in your shelter.