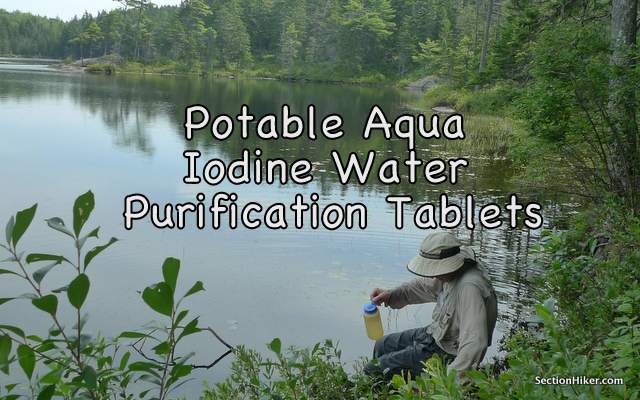 Using iodine tablets is not for the faint-hearted because they turn clear water a nasty-looking brown that tastes mildly astringent to drink. Iodine stains the inside of drinking bottles and reservoirs, and your clothes if you spill it on them. While it’s effective in killing viruses and bacteria, iodine tablets are only moderately effective in killing giardia lamblia, according to the CDC, despite the manufacturer’s claims to the contrary. It’s also ineffective against cryptosporidium.  The CDC also advises against consuming iodinated water for more than a few weeks. Pregnant women, those with a history of thyroid disease, and those allergic to iodine should not drink iodinated water. Iodine tablets have also been banned from sale in European countries because of these health reasons since 2009.

In defense of iodine tablets, they can make a good addition to emergency preparedness kits (in addition to a filter to remove protozoa and other hard-shelled parasites) because they not expire when stored properly and they help limit the intake of radioactive material in the event of nuclear war. Iodine tablets are fast acting (30 minutes per liter), lightweight and about half as expensive as chlorine dioxide tablets, like Katadyn Micropur.

You can also neutralize the brownish color and remove some of the Iodine taste by adding vitamin C to water that’s been treated with Potable Aqua Iodine Tablets, using PA+ Plus Taste Neutralizer Tablets, tiny tablets which are usually sold with the iodine tablets to make them more palatable. You add these *after* the iodine tablets have purified your water, otherwise they’ll interfere with the purification process. The PA+ Plus tablets take 5 additional minutes to work. If they haven’t completely dissolved in that time, you can still consume the water.

Why does Potable Aqua claim on the product label that their iodine tablets kill Giardia when the US CDC (Center for Disease Control and Prevention), states that iodine tablets only have a low to moderate effectiveness in killing Giardia? (see A Guide to Drinking Water Treatment and Sanitation for Backcountry & Travel Use)

So I called up Potable Aqua’s customer service number and asked them specifically about the CDC report. They told me that “if Giardia is a primary concern, we recommend that people use Chlorine Dioxide tablets instead of Iodine Tablets. They are also available under the Potable Aqua Label.”

If you need to protect yourself from giardia, a protozoa found in commonly backcountry water sources, and prefer using a chemical purification method over a filter or UV light, don’t use Potable Aqua Iodine Tablets. They are not effective against giardia or cryptosporidium, another hard shell parasite, which is an increasing concern in backcountry water sources. Iodine water purification tablets are really only effective against viruses and bacteria, and more appropriate as a second stage purification method to kill viruses after removing giardia and cryptosporidium with a water filter. Even then, using Potable Aqua’s Chlorine Dioxide Water Purification Tablets is preferable over iodine tablets, because they don’t turn your water brown, have a less offensive taste, and don’t have potentially harmful health effects.

The author purchased this product.

SectionHiker is reader-supported. We independently research, test, and rate the best products. We only make money if you purchase a product through our affiliate links. Help us continue to test and write unsponsored and independent gear reviews, beginner FAQs, and free hiking guides.
Previous What’s the Best Canyon Hiking Footwear?
Next What’s the Difference Between 100% DEET and 30% DEET Insect Repellant?