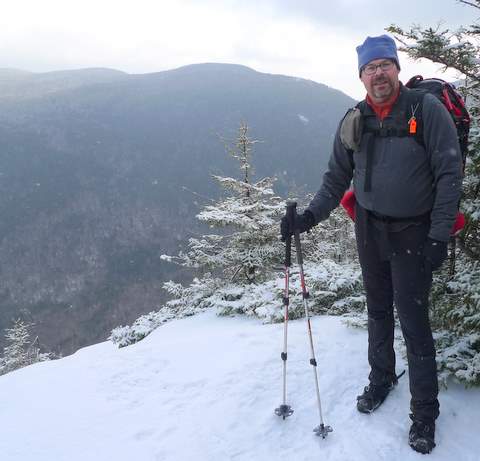 
I've had my sights on climbing Sandwich Dome (also called Sandwich Mountain) for over a year, but been thwarted from hiking it at least twice due to poor weather conditions. This past weekend however, Naturegirl and I bagged it just before heavy snow squalls hit the White Mountains, in an early winter hike.

Sandwich Dome (3,993 ft) is not a 4,000 footer, missing the list by just 7 feet. But it is a big mountain and a formidable climb, dominating the western end of the Sandwich Range Wilderness at the southern end of the White Mountains.

On this trip, we climbed 2,600 feet in 3.9 miles along the Sandwich Mountain Trail, taking a short 0.4 mile detour to bag Jenning's Peak (3,460 ft), a subsidiary peak with fine views along the way.

The first mile or so is quite a steep trail requiring good scrambling skills and extra traction in snow. Naturegirl and I started out using microspikes but I switched to the crampon half of a pair of Kahtoola Mountain Snowshoes after an hour, for increased foot insulation. I'll be publishing a review of these in the next week, but suffice to say they've helped trim 3 lbs off my winter gear list by eliminating the need for me to carry separate crampons on "easier" winter hikes.

On this hike, I was wearing a pair of Inov-8 trail runners, Rocky Gore-Tex socks, medium weight wool socks, and duct tape on my heels because I'd gotten heel blisters on my last hike wearing a pair of boots that didn't quite fit. I got the trail runners wet on a stream crossing early in the hike and my toes got cold after an hour, but the Kahtoola crampons helped warm them up, adding another 1/4 inch or so of plastic and steel insulation under the ball of the foot and toes. My feet did eventually warm up on the second half of the hike, but this is probably the last time I'll use trail runners in the Whites until next spring. 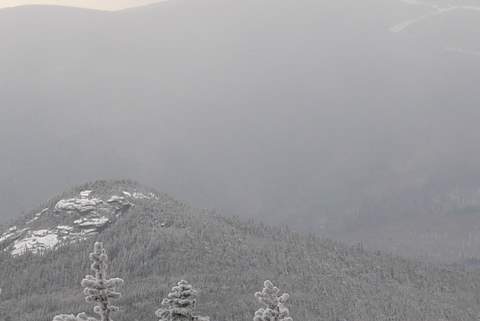 
From Jennings, the trail up to the Sandwich Mountain summit continued to be a strenuous hike carrying our winter packs. The air was rather dry and I made a point to drink my water to stay hydrated because I knew I was venting moisture as I puffed up the trail. Dehydration can really sneak up on you fast in winter, and staying hydrated not only keeps your energy level high, but also prevents hypothermia.

After just over 3 hours of climbing, we reached the summit cairn on Sandwich, but the views of nearby Jennings, Mt Tecumseh, and the Tripyramids were obscured by heavy cloud cover. The light up on the final mile to the summit was quite dim under the cloud and the temperature had dropped substantially so we didn't linger long on the summit.


On our descent, we hiked 4.5 miles out via the Drakes Brook Trail, which is a much easier trail except for one steep spot. We really flew on this section, completing our descent is about 2 hours.

This was a great climb and we'll probably be doing a lot more hikes in the Sandwich Range this winter since it's a lot closer to Boston for winter day hiking than the high peaks in the Northern Presidentials.

The total distance of this hike was 8.4 miles with 2,600 ft of elevation gain and a round trip time of 5 and a half hours.