I am flying to Scotland in less than two weeks to participate in the TGO Challenge, backpacking across the country for 15 days. I’ll be accompanied on this hike by two teammates, Martin Rye from Northern England and Grant Sible from Austin, Texas. This will be Grant’s first Challenge hike, my second and Martin’s fourth.

Our route starts on the west coast of Scotland in a small village named Torridon and ends on the east coast on the beach at Lunan Bay. It is 224 miles long with 39,000 feet of total ascent, roughly equivalent in distance and elevation the the John Muir Trail in the United States. The only difference is that we MUST finish our hike within 15 days, regardless of the weather conditions we might face.

We plan to hike fast, do 15-20 mile days and bag some major peaks along our route. This will include camping out in pictureasque spots, called wild camping in the UK, except for two nights when we’ll spend in hostels or campsites enroute. Motorized transport of any kinds is against the rules, except for the ferry across Loch Ness, which we plan on taking to get from the western side of Scotland to the eastern half.

No gear list is complete without first assessing the environmental conditions you are likely to encounter on a trip and planning your gear choices around them. Gear lists are not static. It pays to make one for every trip you take.

It is early spring in Scotland, after a very hard winter which saw a lot of snowfall. Water crossings are expected to be high and we expect bridges to be washed out. There may stil be lingering snow at higher elevations. The wind in Scotland is constant, so shelters and cook systems must be effectively windproof. The ground may be damp or wet. It is common to have wet shoes. Water is very plentiful and considered pure except near agricultural landholdings. We may experience snow, sleet, freezing rain, and rain, and may need to stay encamped if conditions are poor rather than walking through it. It doesn’t matter, we only have 15 days for the crossing.

We don’t expect an onslaught of bugs, but they might appear. Tick and Lyme disease are however on the rise in Scotland. Venison is a major protein source and Scottish estate owners raise huge herds of deer like cattle. That is a sight to see.

We will be traversing 3 different mountain ranges along our route. There could be whiteouts or fog and we need to be on our best navigation game. There are basically no trees in Scotland, so all mountains are effectively above treeline. The base of the mountains is close to sea level. The highest peaks are 4,000 feet tall but very rugged. Knife edge ridges abound.

Hikers are allowed to cross all property boundaries in Scotland as long as they don’t wander into fields where bulls live! May is lambing season and farmers appreciate it if hikers don’t disturb the little ones or mommy sheep.

There are 19 hours of daylight in May. There are no predetory animals to worry about and you can sleep with food in your tent or shelter. There are poisonous snakes – vipers- in the heather – but their bite won’t kill an adult or someone with a heathy immuse system.

Volume wise, I need to be able to carry 9 days of food to the start point of our route in Torridon on the west coast of Scotland. Grant and I are going to do a few days of peakbagging before Martin arrives and the actual TGO Challenge starts. After that I need to carry a maximum of about 5 days of food. 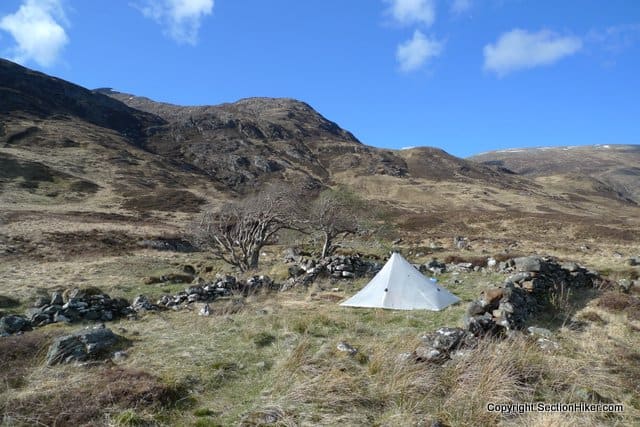 My gear list will be quite similar to what I brought on the last Challenge I participated in, back in 2010, although I will need a higher volume pack, a Gossamer Gear Mariposa Backpack, to carry 9 days of food at the beginning of our trip. The Mariposa has a versatile compression system so I can reduce its volume when I don’t have to carry as much food.

In addition, I will be using a pyramid-shaped 2 person, floorless tarp which is effectively windproof, if well staked out. It has plenty of interior space for 1 person plus their gear in bad weather and good enough ventilation that you can cook inside without suffocating from carbon monoxide poisoning.

I will be bringing an isobutane stove, a MSR Reactor with a 1L pot to cook with. I like it because it packs well, it is very effiicient in terms of gas consumption, and it is windproof: the heating unit screws onto the bottom of the pot. At 14 oz, it is not the lightest stove/pot combination but I will quickly make up the weight difference on fuel savings.

We will be using compasses to navigate, but I have a small refurbished SOL gps along for position and altitude checks. I will carry a SPOT II GPS Satellite Messenger so I can send daily ok messages to my wife. She worries. I decided against bringing an iPad because I want to fully enjoy this journey without distractions. I’ll have a phone so I can plug into wireless if there is any but I won’t bother getting a UK phone card for calls.

For water purification, I’m bringing a Sawyer Squeeze water filter and Aqua Mira drops. They say that Scotland water is pure but you do see deer carcasses in streams after winter. To each his own.

Clothing. The normal 3-season layering approach with outer shell, mid-layer insulation, and a permethrin-soaked hiking layer for tick protection. The same on the bottom and a separate set of clean, base layer clothes to sleep in each night, or don if it gets really cold. Rain and high wind are the main concerns. For feet, trail runners because they dry fast and don’t produce blisters when wet, augmented by gore-tex socks if we have to walkthrough snow-melt, more as a vabor barrier liner than anything.

Isaac, the stuffed moose will be my companion on this trip. A particle physicist by trade, he will be looking for the universal particle in the Highlands. Buy him a pint. He has a lot of funny physicist and moose stories.