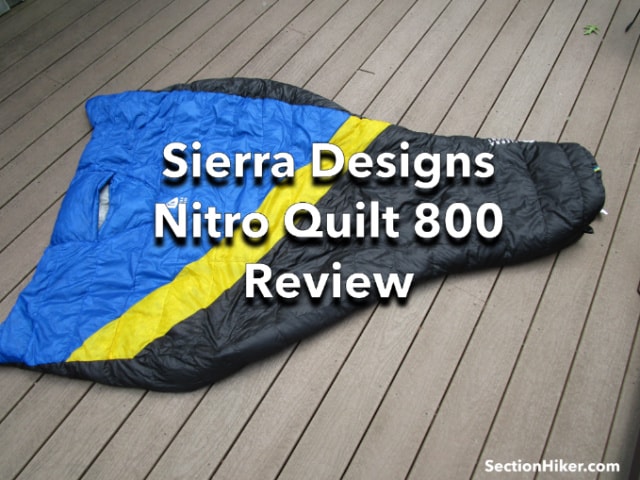 The Sierra Designs Nitro Quilt 800 (35 degree) is a down quilt with a unique hideaway hood system that you can use to insulate your head in cooler weather if you’re sleeping on the ground on a sleeping pad or in a hammock. It’s the most compelling feature of the quilt, which is more “bed-like” when compared to the streamlined cottage quilts used by most backpackers. Nevertheless, the Nitro Quilt is still a nice crossover option for people who want a piece of sleep insulation gear that can be used for camping and backpacking and which provides greater freedom of movement than a sleeping bag.

The Nitro Quilt 800 is a hybrid hooded quilt good for camping and backpacking. While it doesn't have a pad attachment system, it is cut very wide to help prevent drafts from chilling you if you roll over at night.

The notion of a “hideaway” hooded quilt was first introduced by Sierra Designs several years ago, but never really caught on with ground sleepers or hammock users, which is too bad because it extends the value of a backpacking quilt quite considerably.  The Nitro Quilt 800 /35 is the latest manifestation of this hood and quilt concept, which was sold previously as the Backcountry Quilt 700 (2017) and the Backcountry Quilt 800 (2014). The Nitro Quilt 800 is substantially similar to these previous models although slightly shorter, with a new color scheme, and thinner shell fabric. 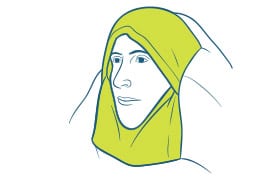 The hideaway hood is a slit in the front of the quilt that encloses your head like a jacket hood when you stick your head through it. It is quite comfortable and not at all restrictive. It also makes it possible for you to sleep on your side, which isn’t something you can do easily with a mummy sleeping bag.  The hood folds flat over your chest and has a back panel to prevent drafts when it’s not being used.

The hideaway hood can also make switching to the Nitro Quilt 800 much more palatable for campers or backpackers who are hesitant to switch from a mummy bag to a quilt. It also insulates the tops of your shoulders and the back of your head and neck, something that you don’t get with a more streamlined cottage quilt.

The Nitro Quilt 800 35 doesn’t come with any straps to keep it attached to a sleeping pad.  I personally find such a system useful because I toss and turn at night. Instead, the quilt is cut very wide so it drapes over the sides of your sleeping pad to block cold drafts. The extra width also lets you pull the quilt underneath you. The foot box is closed so the quilt does not open up completely, which also helps prevent the quilt sides from billowing out like a regular blanket.

The Nitro Quilt has two hand pockets on the top corners of the making it easier for sleepers to grab onto the corners and fold underneath their heads when sleeping face down on their tummies. It’s an intriguing addition, that many people like for snuggling up in a quilt and one that’s a benefit since the Nitro Quilt doesn’t have a pad attachment system to prevent side drafts. Here’s a video that illustrates the idea, as well as other features of the design.

It’s usually impossible to test the temperature rating of quilts because the standardized test requires a hood. But it is possible with the Nitro Quilt 800 because it has a hideaway hood. This is particularly useful if you’re switching from a mummy bag to a quilt so you can have some assurance of the equivalence of the insulation (see Backpacking Quilt Temperature Ratings). The EN ratings for the Nitro 800 are EN comfort (for women and small frame men) and 37 degrees, EN limit 27 (for men). This assumes that you’re wearing long underwear and a hat and using a sleeping pad with an R-value of 4 or more.  Any less and you probably won’t get the expected EN temperature performance indicated (see our comprehensive list of Sleeping Pad R-values).

That said, I didn’t find the Nitro Quilt 800 / 35 Degree to be terribly warm when I tested it, perhaps because I’m a lean woman and not a man. The down fill in the bag is a little patchy which may contribute to its underperformance at lower temperatures.  I tossed it in my dryer with wool balls hoping to break up feather clumps and even out the filling.  There was a slight improvement, but there are still spots where feathers are missing and the light shines right through the shell. Perhaps the 20-degree version is more reliable, but I’d rate the 35-degree version closer to 45 or 50 degrees based on my experience using it, regardless of what the EN tests predict (the test procedure uses a dummy that doesn’t toss and turn at night like a human.)

The Nitro Quilt 800 is a very odd-looking quilt that doesn’t look a whole lot like the other backpacking quilts sold today. However, the head covering system is quite comfortable and helpful in staying warmer.  Still, the quilt does tend to flop open when you roll around at night, letting cold air in since it doesn’t have a pad attachment system. While the hand pockets in the corners are quite helpful in pulling the quilt tight around you if you’re a stomach sleeper, they’re hard to use effectively as a side sleeper without serious gymnastics and contortions. This is less of an issue if you use this quilt inside and ultralight bivy sack or hammock which will hold it in place and prevent side drafts.

What I don’t quite understand is why Sierra Designs doesn’t put a hideaway hood on a more conventional styled backpacking quilt that comes with a simple pad attachment system. The hideaway hood is a great feature on the Nitro, but it could be an even better differentiator if it were repackaged as part of a more “traditional” ultralight quilt system. That would be a lot more innovative than rebranding a pre-existing product (the Backcountry Quilt) with a new name and changing the colors it comes in. If you want to be perceived as an innovative brand, you have to innovate.

Wanda Rice has been backpacking since the late 1980’s. She has climbed the New Hampshire 48, the New Hampshire 48 in winter, the New England 67, the New England Hundred Highest, and the Four-Season 48. Wanda also teaches for the Appalachian Mountain Club’s (AMC) Mountain Leadership School, the AMC New Hampshire Chapter Spring and Winter Schools as well as the AMC NH Winter Hiking Series. She leads day and overnight trips for AMC NH year-round and loves mentoring new leaders. She is a gear junkie, a self-proclaimed Queen of Gear Hacks, and loves sharing her tips and tricks with others. Wanda lives in southern NH and is looking forward to moving closer to the mountains in the next few years.

Disclosure: Sierra Designs provided the SectionHiker with a quilt for this review.

SectionHiker is read supported. We independently research, test, and rate the best products. We only make money if you purchase a product through our affiliate links. Help us continue to test and write unsponsored and independent gear reviews, beginner FAQs, and free hiking guides.
Previous Hiking a Blueberry Mountain Loop
Next NEMO Siren 45 Quilt Review