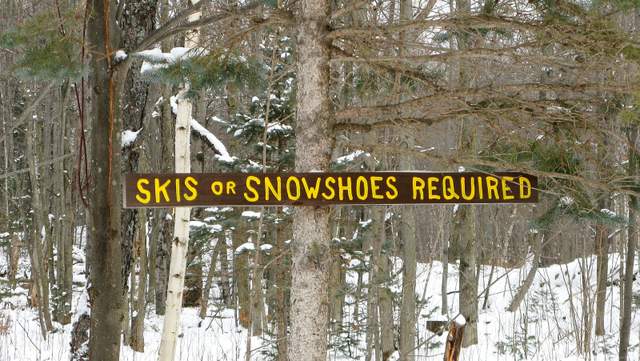 It’s a common courtesy among winter hikers to wear snowshoes when hiking on winter trails that are covered in unpacked snow deeper than 8 inches. Hikers who don’t wear snowshoes usually posthole, plunging knee or waist-deep into the snow and creating a deep hole that other hikers passing by the same spot might fall into. This can lead to serious leg injuries but is easily avoided if everyone using the same trails uses floatation like snowshoes or skis.

Trails that have been cratered by someone postholing are extremely annoying to walk on. It’s a lot like playing the game Twister while walking across a minefield. Plus, you have to scratch your head and ask why anyone would want to posthole in winter because it is so exhausting, not to mention dangerous because a single person postholing alone can easily become trapped in deep snow. Before you set off on a winter trail covered in unpacked snow, take the time to equip yourself properly with snowshoes and other winter gear so that you can be self-sufficient and not put others at risk if you need to be rescued.

But hikers aren’t the only ones using winter trails, especially where cross-country skiing is popular too. Postholing and snowshoeing in existing cross-country ski tracks is also frowned upon because it’s disrespectful to the person who broke the ski track in the first place and will wreck the track, making it much harder and less enjoyable for skiers to ski back on.

When snowshoeing along ski tracks, snowshoers should walk outside an established ski track or create a parallel track next to an existing ski track. That way both snowshoers and cross-country skiers can enjoy the winter trail system in their own way, without conflict or ill will. There’s plenty of snow for all of us to enjoy.