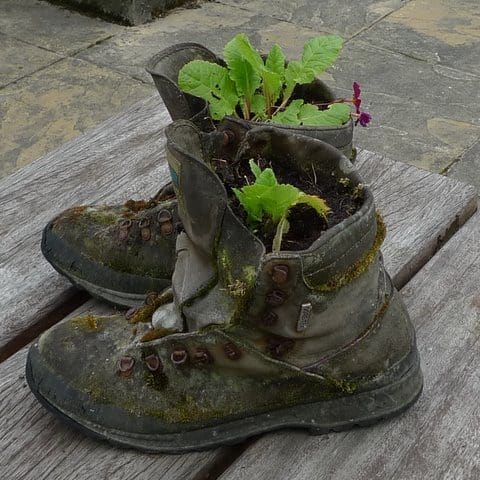 
When I was planning my original Challenge route, I built in an rest day into my schedule, called a zero day here in the states. My plan was to stop in Kinguissie, at the half way point of my hike, to pick up a mail drop and spend a full 24 hours off my feet. Schedule-wise I arrived a half day early, after 5 and a half days of hiking, traversing 85 miles from Shiel Bridge on the west coast.

When I first arrived in town, my first goal was to find a comfortable place to stay. I followed the signs to the tourist information office which I’ve found is the fastest way to get an overview of a small town and a B&B booking in Scotland. The signs however didn’t lead anywhere so I resorted to walking up and down all the streets in search of a nice B&B with a garden where I could sit outside and read on my day off.

After a quick walk through town, I ended up at The Hermitage, a 4 star B&B located near the town square. Unfortunately they were booked, but they found me a room at Columba House, a 3 star inn that proved to be perfect for my needs with a large garden and an attached restaurant/bar. I got a nice room with a high ceiling and tall window overlooking the back garden.

The first thing I did after I got my room was to take a hot bath. My shins and quads were aching after 5 days of hard hiking and soaking in the hot water was a luxurious way to unwind my sore muscles. After that, I made a cup of tea and sat naked on the easy chair in my room reading my book, The Trudeau Vector, while it rained lightly outside. Great book, by the way, if epidemiological murder mysteries are your sort of thing. 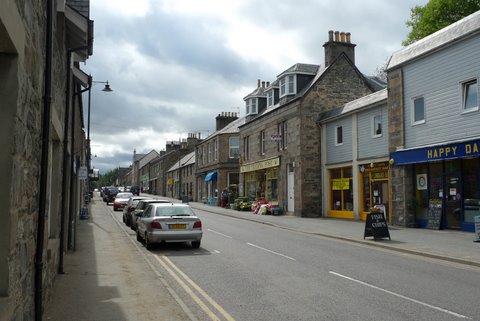 
After a spell, I took another walk around town to do a few errands. My shoulders had become sore in the past day and it felt incredibly good not to be carrying a backpack. I found a pay phone and did my Challenge Control check-in and called my wife briefly to tell her that I was fine. I saw lots of other Challengers passing through town who were doing the same.

For dinner, I had a nice venison stew and turned in early, the effort of hiking for 5+ days finally catching up with me.

At breakfast the following morning, I sat with two other Challengers, Norma and John Keohane, who had stayed in the inn overnight. Hearing that I had time to kill, John encouraged me to visit a retired Challenger named Derek Emsley who lives in Kinguissie and say hello. John had visited him the previous day, as had Ozzie Mike, a Challenger from Australia.

Derek and I are not complete strangers, actually. We had corresponded via the Challenge message board about the Kinguissie Post Office hours when I was planning my route, explaining how small town Post Offices close early on some days. 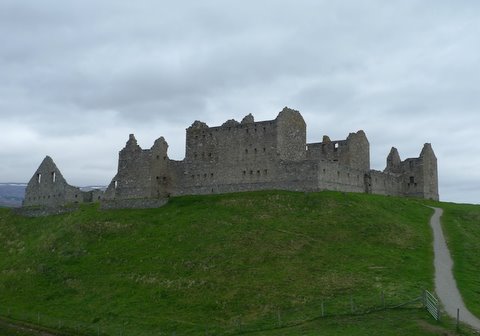 
A bit of Scottish History


After breakfast, I headed off to  take a proper tour of the famous Ruthven Barracks and to do my resupply errands before dropping in on Derek. Ruthven is the kind of historic ruin that my wife likes to tour when we visit Scotland and I wanted to take some atmospheric photos of the place to show her when I got home.

One of the things that becomes apparent when you walk across Scotland is that the population is concentrated in the river glens and that there are few roads connecting them to one another. Anyone controlling a major road or a river crossing would effectively control all commerce passing by.

This was the case with Ruthven, which is built on top of a natural mound of sand and gravel deposited by glaciers at the end of the last ice age, 14,000 years ago. Originally erected as a wooden castle in the 1200’s, it overlooked a reliable crossing point over River Spey before it was bridged in the late 1700’s. 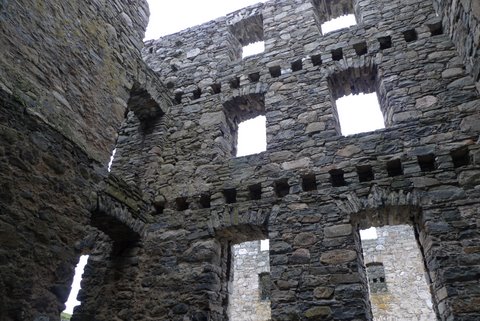 The castle was rebuilt in stone in the late 1500’s by the Earl of Huntley. By then, Ruthven was an important enough population center to be granted Burgh status with the right to hold its own fairs and markets.The Barracks were added around 1720 by the Hanoverian government to house troops for policing the road, which today, is still a principal link between the Lowlands and Inverness.


I had sent a food parcel to the Kinguissie Post Office Post Restante to see if mail drops are a reliable way to resupply in Scotland. My package contained backpacking food from my food sponsor Packit Gourmet as well as more ramen noodles, toilet paper, lithium batteries, hand cleanser, Starbucks instant coffee, and some fresh clothes. 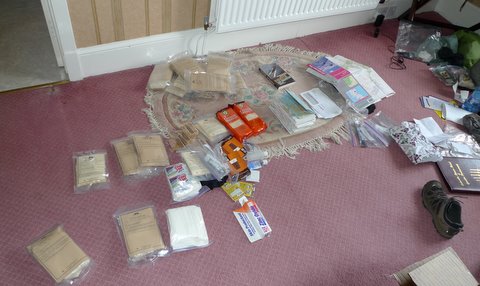 Breaking up my Mail Drop

This being my first Challenge, I really didn’t know what resources I’d find in Kinguissie before I got there, so sending a mail drop was a good way to hedge my bets, despite the fact that I found two food stores in town.

In general, I think that mail drops are an effective way to resupply on the TGO, but they take a lot of forward planning to execute. Next time, I will spend more effort figuring out which resupply towns have good food shops and which don’t, so I can place my parcels at locations where they’ll provide the most value and keep my food weight as low as possible.


After breaking up my food parcel, I headed over to the Emsley house for an unannounced visit. Derek and his wife Marian, another former Challenger, were most gracious in welcoming me and we sat in their garden in the sunshine and reminisced while I gorged on Marian’s homemade fruit cake.

They’ve both retired and are living the life, traveling around the world, with many trips and cruises to the far east. We chatted about quite a few topics ranging from gear to work-life balance, and Derek’s advice to me was simple: live for today. Amen.

I was actually lucky to catch Derek and Marian in when I arrived. They had been in and out for a few days, hosting and shuttling a Challenger who had recent pacemaker surgery to and from the trail each night, slackpacker style, so he wouldn’t have to carry a heavy backpack. I can’t remember his name, but he’d gotten a special dispensation from Challenge Control to use wheeled transportation to sleep indoors each night and return to his previous end point each morning. Quite a story.

After a few hours, I left Derek and Marians’ company and went back to reading in my hotel’s back garden and watching some newly hatched ducklings. Visiting them both had been lovely and I plan to keep in touch.

Back on the Trail


After a relaxing stay at Columba House, I left before 6am the following morning, headed to Glen Feshie, the Cairngorms, and Lochnagar which would prove the highlight of my trip.

Taking a rest day had been restorative and I’ll probably do this again on my next Challenge hike. If you are walking though Kinguisse and looking for a good place for the night, be sure to give the Columba House Hotel a try. The owners Myra and Bill are very nice people and the house is a welcome refuge.