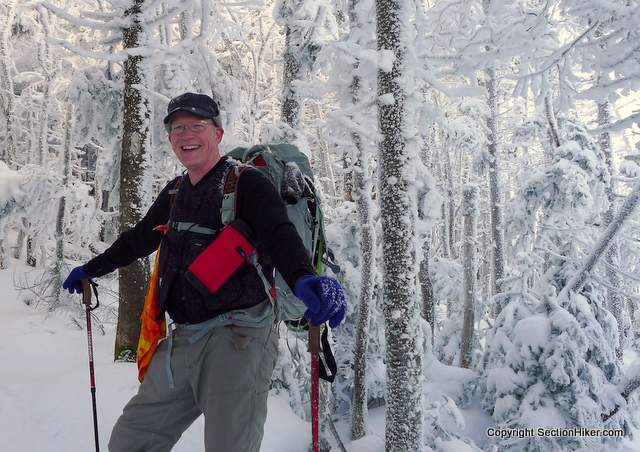 As we neared treeline on North Kinsman, Mr Bunny paused to admire the rime ice that coated the stubby spruce trees near the mountain summit. It had taken on a curious orange glow instead of crystalline white, diffusing the glare of the waning winter sun in the brilliant azure sky. It was one of those days, one of those perfect hikes, when the exertions of a winter hike are forgotten admist its beauty.

We’d climbed up to Kinsman Ridge from Franconia Notch that morning, past the frozen Lonesome Lake, up the challenging Fishin’ Jimmy Trail to Kinsman Pond, and then the twin summits of North Kinsman and South Kinsman. It was cold, in the single digits, but we had good powder for snowshoeing along the summit ridge and could get by with microspikes on the steeper sections below.

Hiking up to North and South Kinsman and back is a long hike in winter, 10 miles in length with over 3500 feet of elevation gain. In winter, I usually plan on covering 1 mile per hour in the mountains when we’re hiking on trail, so I knew we were going to be overtaken by darkness on the hike out during on this trip and had prepared accordingly by bringing extra headlamps, a stove, and sleeping bag. With sunset at about 4:30 pm, it’s pretty normal to hike the last part of a long hike under headlamps before the days get longer again.

We made good time from our cars to the Lonesome Lake Hut, covering close to two miles in an hour. The hut is open on a caretaker basis during winter, meaning you can come and spend the night (for a small fee) and use the kitchen to cook your own meals. The cabin is heated for a few hours at night by a wood stove but remains pretty chilly during the rest of the day. I know the current caretaker, named Beowulf, so we popped in on the way up and on the way back out to say hello and eat some food.

The trail up to Lonesome Lake had been loosely consolidated snow, but we still needed microspikes to get up it because it’s fairly steep. Upon leaving the hut, we donned microspikes again to hike the Fishin’ Jimmy Trail which has many steep climbs and ledges between the hut and Kinsman Pond, at the foot of North Kinsman Mountain. The Fishin’ Jimmy Trail coincides with the Appalachian Trail here, including the Kinsman Pond shelter which is a newer AT lean-to built close to its shore. My companions had never seen the shelter or the lake, so I led them down the short spur path and through knee-deep powder so they could look at the frozen lake and the North Kinsman ledges that would be our next stop.

I’ve climbed the Kinsmans many times over the years and have hiked every single trail and route leading to them, so I’m intimate with the trail system in this section of the Whites. The last time I’d been on the peaks had been the previous June, coming from Mt Wolf, when I’d run out of water on North Kinsman in high heat. The temperature and climate differences between these two hikes couldn’t have been more different.

We backtracked from the pond and covered the short distance to the Kinsman Ridge trail which leads to North Kinsman and then South Kinsman, close to a mile farther south. North Kinsman is much smaller and pointier than South Kinsman which has a wide flat summit marked by a large rock cairn. But North Kinsman makes up for it with a large open ledge, just below its summit, that provides unobstructed views of Franconia Ridge (Mts Lafayette, Lincoln, Haystack, Liberty, and Flume) on the other side of Franconia Notch, often considered the most beautiful section of the Appalachian Trail. Covered in snow and rime, it looked like a great day on the peaks with low wind and bright sunshine.

Continuing onto South Kinsman, we hiked down into the wide col between the two peaks. I had hurried my companions to leave North Kinsman, perhaps too soon, because we all ran out of steam on the long hike to the South Kinsman cairn. We did stop for a much longer food break when we arrived, reveling in the strong sunshine.

From South Kinsman, I could see Bondcliff Mountain in the distance, one of the most beautiful peaks in the White Mountains. I’d never realized that it could be seen from this vantage point. I also pointed out Wolf Cub and Mount Wolf to my friends, who’d bushwhacked with me up Cub about a month ago. Mount Mossilauke loomed to the south and we had views all the way to Vermont to the west. It was a fine day.

We turned around at 1:30 pm, five hours into our hike for the long hike out. With sunset at 4:30 pm, I hoped we’d reach the Lonesome Lake Hut by dark, which we did, on the nose. After another short food break, we made it down the Lonesome Lake Trail back to the trailhead illuminated by a headlamp. We had had a great hike, one to be thankful for on this Thanksgiving weekend.

SectionHiker is reader-supported. We independently research, test, and rate the best products. We only make money if you purchase a product through our affiliate links. Help us continue to test and write unsponsored and independent gear reviews, beginner FAQs, and free hiking guides.
Previous How to Use a Sewing Awl to Repair Outdoor Gear
Next The Extra Things Trip Leaders Carry