One summer, when I was hiking the Franconia Ridge Trail, I was treated to an incredible aerial display by a glider pilot who was soaring over Mt. Lafayette and through Franconia Notch. He’d fly down the ridge from north to south, loop around in the south, fly over Mt Lafayette from the east, and then dive to treeline over the Greenleaf hut. He was so close to the ground that it felt like I could reach up and touch him. But what was really cool was the silence. You really couldn’t hear him coming above the sound of the wind. The weather was perfect and he was at it all day long, obviously having the time of his life. Or she.

It turns out that Franconia Notch and the area near Mt Washington are considered to be some of the best places to fly gliders (sailplanes) east of the Rocky Mountains in Colorado and there is a club called the Franconia Soaring Association that operates gliders out of a 2,500 ft grass air strip beneath Cannon Mountain and Kinsman Ridge.

I’ve always believed that glider pilots stay airborne by climbing on thermals or columns of hot air that are rising faster than the surrounding colder air. But, I’ve also discovered that gliders use two other kinds of rising air called ridge lift and mountain waves. This makes a lot of sense when you consider the topology of Franconia Notch and Mt. Washington.

Ridge lift occurs when a stream of air hits a ridge or cliff face. The air is forced upward and a glider pilot can gain altitude by flying over or along it. Mountain waves operate on the same principle. Air hits one side of the mountain and flows over it. Here, a glider pilot can catch the wave at the base of the mountain and ride up it’s slope gaining significant altitude and energy in the process.

Apparently, Mt. Washington is well known for mountain wave flying and there is another airstrip near Gorham, NH that glider pilots launch from to catch this wave when it appears. One reason why the wave on Mt. Washington is so strong, and the weather is so nasty, is that the Jetstream drops right on top of the mountain. 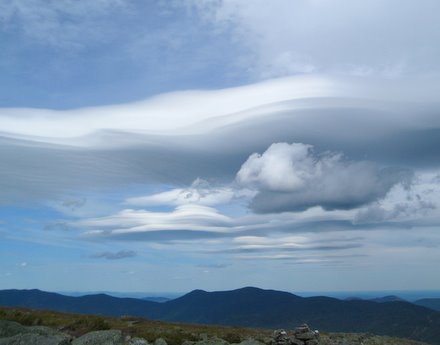 Mountain waves often occur when there are lenticular, or lens shaped, clouds in the sky. I saw some of these in June when I was hiking the Presidential Range and descended by the Lion’s head trail on Mt. Washington. They were very striking looking at the time and you can see the wave pattern in them.

This is the first time I’ve ever seen gliders in the White Mountains but it is really an awesome site. The Franconia Soaring Association provides rides for people who want to experience gliding for themselves from May through October. Gliding in the fall when the trees have changed color is supposed to be spectacular, and I may have to find a way to do this some day.


SectionHiker is reader-supported. We independently research, test, and rate the best products. We only make money if you purchase a product through our affiliate links. Help us continue to test and write unsponsored and independent gear reviews, beginner FAQs, and free hiking guides.
Previous How to Repair Hiking Pants with Tenacious Tape
Next The Five Gallon Challenge: Can You Fit all of Your Backpacking Gear into a Five Gallon Bucket?