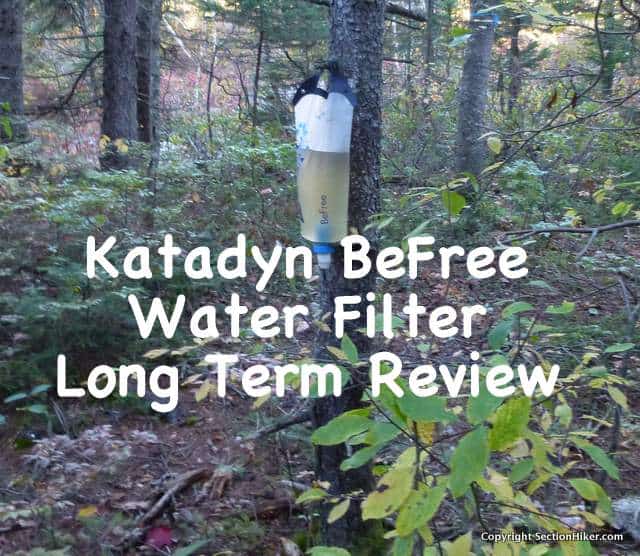 The Katadyn BeFree Water Filter System is a fast flowing water filter that’s bundled with a wide-mouth soft bottle. It’s designed to filter backcountry water sources and removes protozoa and bacteria that can make you sick. The BeFree competes head-to-head with several similar filter systems, including the Sawyer Squeeze, The Sawyer Mini, and the Lifestraw Flex (see recent review) which all use the same compact, hollow-fiber water filtering technology.

The BeFree first became available in the spring of 2017, when I first tested it. The first version came out with a 20 oz bottle, then a one liter (1L) bottle, and finally a three liter (3L) soft bottle that could be used as a gravity filter or in a squeeze-style configuration to force water through the filter at a rapid rate. I prefer the 3L based bottle system for backpacking because I can use the large bottle to carry more water for use in camp and process several liters at once without having to refill it.

Despite the simplicity of the BeFree Water Filter System, I’ve heard numerous stories about people who’ve had difficulty with it. Foul tasting bottles, leaky bottle seals, fast clogging filters, an inability to clean the filter, and the list goes on. I don’t doubt that there have been issues. Sawyer experienced many of the same product quality issues, especially with bursting soft bottles, when they introduced the Sawyer Squeeze some 5 five year ago.

But I’ve never experienced a problem with the Katadyn BeFree myself. Not one, ever, and I’ve used the same products that everyone else had access too. In fact, I spent most of last year using a Katadyn BeFree on numerous backpacking trips and day hikes because I was curious if I could reproduce any of the problems I kept hearing about through the grapevine. Nothing. I never had a single problem with the filter element or the soft bottles and I used them hard. I can’t explain it. Maybe we just have better water in New England than anywhere else.

I became more impressed and accepting of the BeFree the more I used it. The BeFree 3L model can be used as a squeeze filter for one person or a gravity filter for a group, quite easily. You can also transport water in the soft bottle with the filter inserted, provided you keep the cap closed.

I’ve also never had to worry about leaks between the filter and soft bottle cross-contaminating the water I was filtering into my bottles. My filter has never clogged up and I haven’t experienced any noticeable reduction in the flow rate with use. In fact, I rarely bother swishing the BeFree filter to clean it, because the flow rate is so good.

Despite my positive experience with the  Katadyn BeFree, I still prefer using the Sawyer Squeeze water filter for backpacking trips because it can screw onto most of the soda bottles on the planet. The BeFree filter is only compatible with its own 42 mm diameter wide mouth bottle or those made by Hydrapack. If I’m on a backpacking trip in some remote place like backwoods Maine and one of their wide mouth bottles were to tear, I’d be hard-pressed to replace it because BeFree or Hydrapack’s bottles still aren’t widely available. That would render the filter useless because I wouldn’t have a bottle to use it with.

The Sawyer filters (Squeeze and Mini) and as well as the LifeStraw Flex take a different and non-proprietary approach to bottle compatibility. In addition to regular 28 mm diameter soda bottles, they work with the transparent, 70 oz Platypus which I usually carry for use as a “squeeze bag” because they’re so durable (and transparent.) If I’m someplace really remote and I puncture or destroy the Platypus, I can still get by just fine with a plastic Coke Bottle. That’s a big benefit in my mind, because I have lost and destroyed Platypus bottles (from overuse) in the past.

It’s also worth noting that the Sawyer Squeeze has a higher removal rate (99.99999% of all bacteria, such as salmonella, cholera and E.coli; and 99.9999% of all protozoa, such as Giardia and Cryptosporidium). But I’m not concerned about a difference of a few 10,000ths of a percentage, and I doubt it makes much of a difference unless you have a compromised immune system. The slower flow rate of the Sawyer (about twice as slow), compared to the BeFree also isn’t something I care that much about. Both filters are sufficiently fast.

Now, my preference of the Sawyer Squeeze filter over the Katadyn BeFree is colored by the fact that I almost always backpack alone and can’t rely on a partner or group to lend me their water filters if mine fails. If I didn’t hike solo and the BeFree wasn’t the only water filter in my party, then I could see preferring the BeFree over the Sawyer, due to its improved flow rate. In my experience, they’re both good systems and perfectly useful for backcountry use.

The author purchased this product with his own funds.