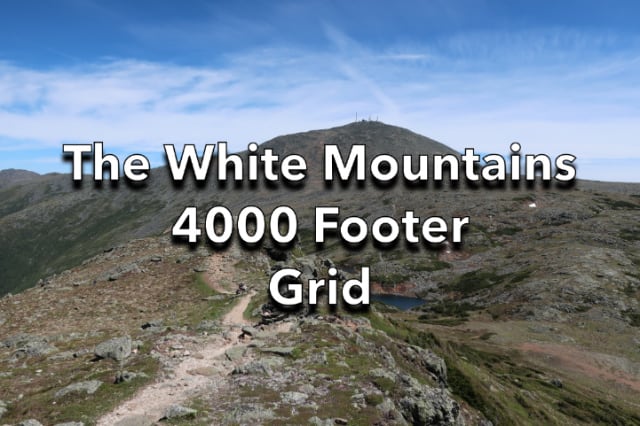 The White Mountains 4000 Footer Grid, called The Grid, requires hiking all 48 of the mountains on the White Mountains 4000 footer list, once each calendar month. That equates to 48 x 12 or 576 climbs, although you can climb multiple peaks on the same hike and have them count. This requires about 3000 miles of hiking with 1,000,000 feet of elevation gain.

To date, 119 people have finished one round of The Grid with the first recorded completion in 1989. Of those, several have finished more than one round, including Ed Hawkins, known as Hiker Ed, who’s finished it eight times and is still climbing 4000 footers in his 70’s. Several other people have completed multiple rounds and a famous trail dog (a mini schnauzer) named Pepper has even completed one.

The Grid is called The Grid because hikers have to fill in a spreadsheet resembling a grid to record their hikes. You can download a copy of your own Grid Spreadsheet here.

Here’s an example with my current grid tally, embellished with some personal formatting. I’ve only just started hiking 4000 footers deliberately with an eye to finishing the grid someday, but I’m already pretty far along because I’ve done a lot of hiking, backpacking, and peakbagging in the Whites over the past 15 years. I have a lot of ascents that can’t be counted more than once, though, because I’ve summitted the same mountains multiple times in the same month.

Each cell in the spreadsheet, records the day of the month and the year of the climb (as in day, year). You can only count a summit once for each grid cell, even if you’ve climbed the summit multiple times during the calendar month or in the same month over multiple years.

The Rules of the Game

The rules for hiking The Grid follow the standard peakbagging rules used by most other peakbagging lists in the Whites.

What Makes the Grid So Tough?

There are a lot of factors that make the grid difficult to finish and they vary widely from person to person.

First off, it takes a lot of time to climb 576 summits, even if you live near the White Mountains and don’t have far to drive. Between work, family, school, and sleep, it can be a challenge to find enough free time to make rapid progress, even if you manage to hike multiple adjacent peaks at once.

The second major obstacle is the weather, which can make it difficult if not downright dangerous to climb the highest above-treeline peaks. Cold temperatures, high winds, deep snow, and high water crossings can force you to cancel many hikes, especially during the winter months and shoulder season months, which last from November into May.

Luckily, winter hiking is popular in the Whites, so the most frequented winter trails to the 4000 footers tend to be broken out by snowshoers and hikers. Still, you might need to wait for several days after a storm for trail conditions to improve unless you can cajole 10 friends to break out a trail with you or you’re a superman/superwoman and willing to tackle it alone.

Most people complete The Grid over a period of several years. This still takes a lot of perseverance but if you can stay personally motivated, you can make it through the list over a longer timespan. Hiking with a small group of mutually supportive partners can help maintain that commitment while increasing your safety margin when hiking the peaks.

Another common strategy is to climb groups of peaks together on the same hike. For example, most people climb Mts Whiteface and Passaconaway, Adams and Madison, Liberty and Flume, etc., on the same day because they’re connected by a common ridge. That can significantly reduce the number of days required to reach the 576 summits.

Ed Hawkins and several other volunteers oversee the not-for-profit website where The Grid and other local peak and trail awards are recognized by the local community. They print up certificates of recognition and distribute backpack patches to recognize people who achieve a major milestone. It’s a really generous thing to do for people and it really draws the local hiking community together.

If you look through the lists of finishers for these peak and trail lists, you’ll see many of the same names over and over. Despite their impressive achievements, most of the list finishers are incredibly modest and supportive when it comes to helping and mentoring newcomers who want to undertake one of these challenging lists. It’s one of the great things about the hiking community here.

Philip Werner has hiked and backpacked over 8500 miles in the United States and the UK and written over 2500 articles as the founder of SectionHiker.com, noted for its backpacking gear reviews and hiking FAQs. A devotee of New Hampshire and Maine hiking and backpacking, Philip is the author of Backpacking the White Mountain 4000 Footers, a free online guidebook of the best backpacking trips in the White Mountains in New Hampshire and Maine. He lives in New Hampshire. Click here to subscribe to the SectionHiker newsletter.
Previous Hyperlite Mountain Gear Echo II Ultralight Shelter System Review
Next Outdoor Research Foray Jacket Review